FROSTY’S RAMBLINGS Save the ‘British tiger’

The Iberian lynx is the closest surviving relative of the original British lynx, but is extremely rare Photo: Joachim S Müller / Creative Commons
×

SINCE lockdown in March of this year, the number of assorted big-cat sightings in the wild has reached new heights.

Despite almost wall-to-wall virus stories, there have been reports of big cats of various descriptions on the prowl in Britain.

With the coronavirus lockdown failing early on to lock down goats in Llandudno or alpacas in the West Country, and with various zoo escapes spreading panic, perhaps it’s no surprise that all sorts of curious wild-animal sightings have been reported.

In fact the sighting of panthers, pumas and other similar big cats has a long and colourful history. 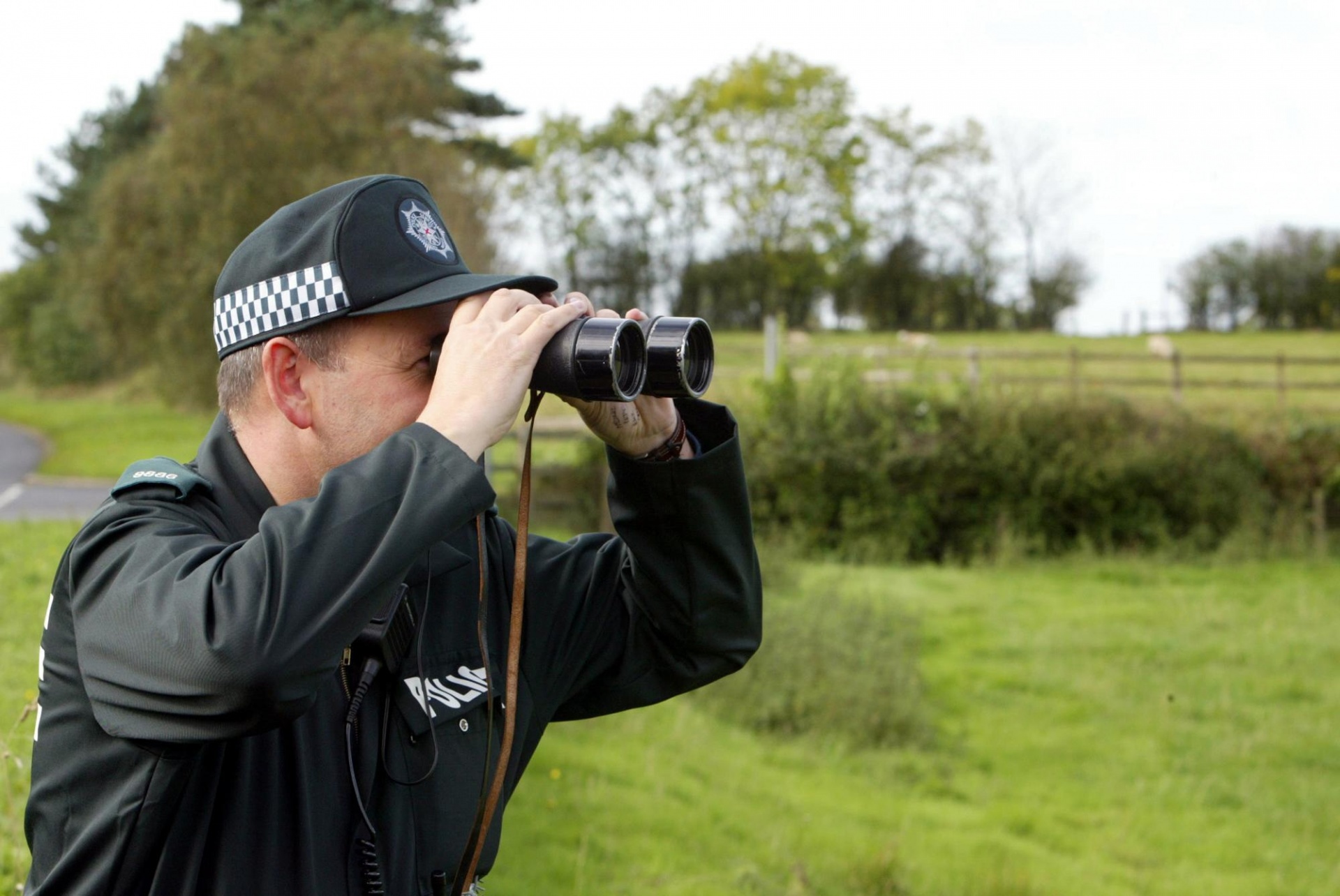 Well, perhaps not colourful. In fact most of the big cats have been black.

Between 2010 and 2020, there were nearly 600 big-cat sightings in England Wales and Northern Ireland. Scotland has many sightings too but keeps separate totals.

I even have my own local big cat. Named by the local media as the Wildcat of Warwickshire, it is said to be around four feet in length and appears to have patterned markings similar to a lynx, including a distinctive ringed tail.

Despite living just yards from the Warwickshire border, I have never seen the beast — nor met anyone else who has.

Big-cat sightings are spread across many counties, with Norfolk having the most, at 57.

Neighbouring Suffolk has had 26 reports. Devon and Cornwall have had 28 sightings, and five reports of farm animals — two sheep and a ram — being killed by big cats.

Among black-panther sightings we have had the Beast of Cumbria and sightings in Pershore, Worcestershire, and on golf courses in Yorkshire and St Albans, Hertfordshire.

Essex is sometimes thought of as big-cat country, but a freedom of information request to Essex Police last year saw the force leaning over backwards not to give any data on sightings.

Truth is, most of these sightings, wherever in Britain, are just of oversize domestic cats that have left home or been bred in the numerous groupings — I’ll resist calling them packs — of feral cats breeding in many locations.

Feral is what we call animals that return to the wild from captivity or domesticity. Feral cats get larger and more muscular on a better diet and more exercise. 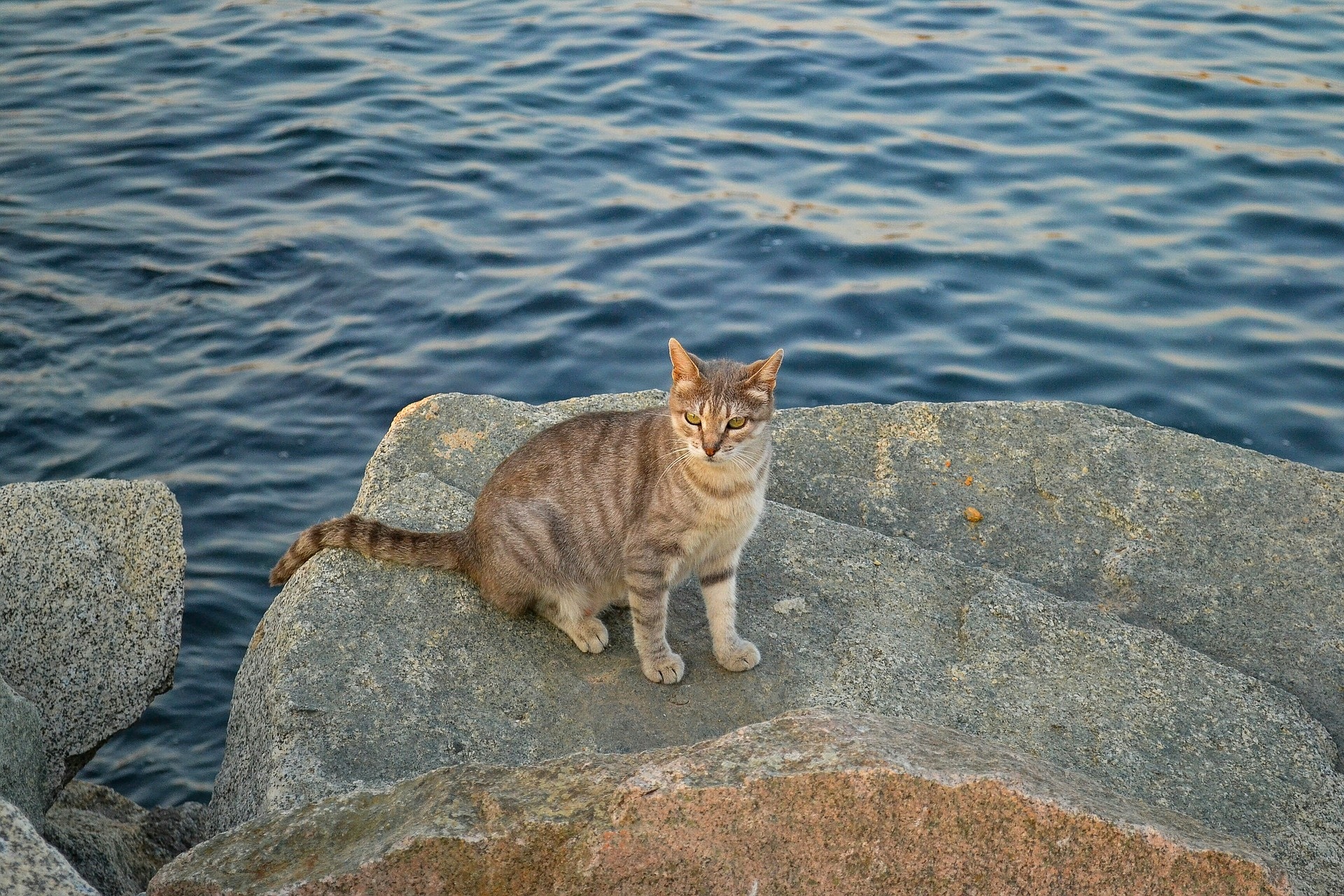 That diet will include small mammals, birds, eggs and even frogs and snakes. The hard exercise of hunting makes cats larger and fitter than pussy ever was at home.

Feral domestic cats, bigger and stronger than their home-loving cousins, have been seen, but strangely rarely photographed, leaping a five-bar gate with a full-grown rabbit in their jaws.

Feral cats are certainly much more numerous that you might think, but anyone seeing one on a field edge or on urban waste ground usually assumes it to be a wandering domestic outdoor cat — just a big one.

A recent freedom of information request revealed the somewhat surprising news that more than 4,800 dangerous wild animals, from tigers to crocodiles, are being kept, perfectly legally, in British homes.

The number specifically excluded animals in zoos or wildlife parks.

Best estimates suggest that the number kept illegally is 10 times greater: that is maybe 50,000 dangerous animals being kept as pets in homes up and down the country, perhaps even in your street.

Some big-cat sightings are undoubtedly genuine, but in a nation where most people now carry a phone with a good camera, it is surprising how few sightings are backed up with good photos or video.

Actual captures or finding dead animals are even rarer.

A surprising variety of big cats are available on the black market. Exotic tiger or leopard cubs — the ultimate “fashion accessory” — are bought by people with more money than sense.

The next thing you know they are in the boot of the Jaguar — what else? — and being dumped in the nearest woodland.

What are these big cats really likely to be? First among the usual suspects is the leopard (Panthera pardus). 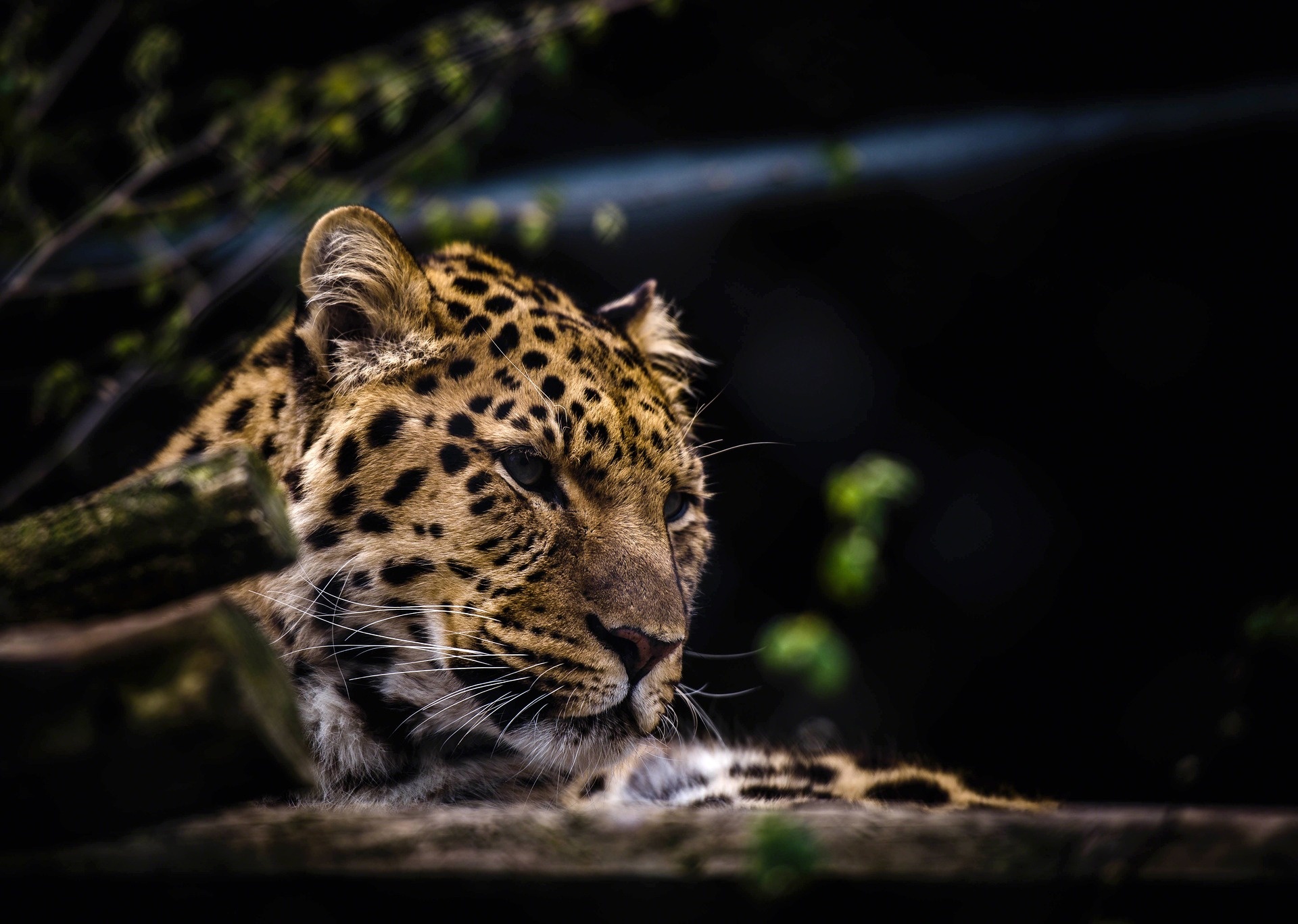 Leopards are endangered and are listed as a ‘vulnerable’ species

Black panthers are a type of leopard and can grow up to six feet long and weigh 200lb (90kg).

The nocturnal puma (Felis concolor), also known as the cougar or mountain lion, can be as big and heavy as leopards or panthers.

The jungle cat (Felis chaus) and the caracal (Felis caracal) are other suspects. 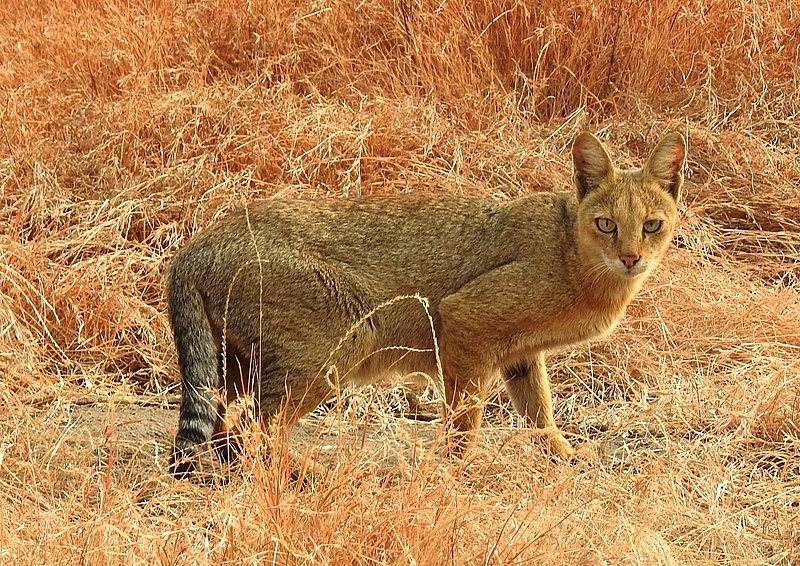 The lucrative wild-animals-as-pets trade is centred in Florida but stretches out to illegal dealers all over the globe, including Britain.

The internet makes the trade easy. Keeping wild animals legally should be controlled by the Dangerous Wild Animals Act (DWA) and local councils can issue licences if the owner’s home is safe.

Ireland has no such law, and in the country where St Patrick drove out all the serpents you can legally keep any wild animal at home — including huge and venomous snakes. Many people do.

Animals in British zoos, safari and other wild animal parks have their own, entirely different, legislation.

Animals do escape from these establishments but the parks usually claim that escapees are soon shot or recaptured.

In hard corona times, some exotic-pet owners have simply released the pets they can no longer afford into the wild.

Britain does have its own native wildcat, (Felis silvestris grampia), our only remaining native cat species.

Similar to a domestic tabby but larger, stockier and with a black-banded bushy tail, it is restricted to Scotland and makes its home where forest meets moorland. 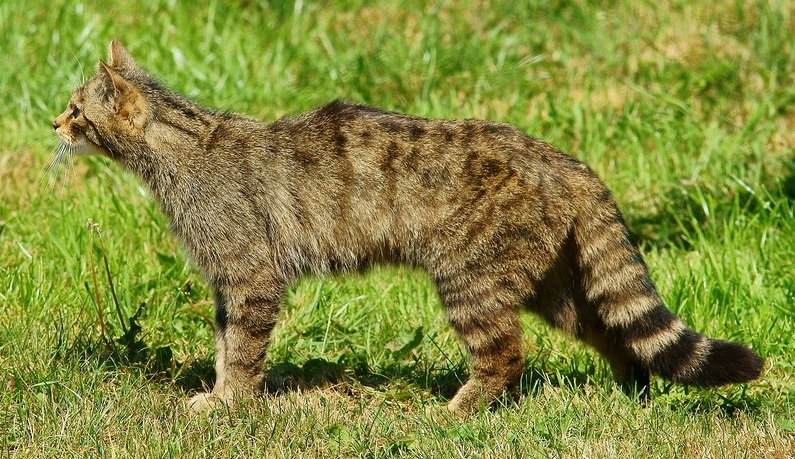 Some unconfirmed native wildcat sightings have been claimed in England.

This native wildcat is severely threatened by domestic cat diseases but mostly from hybridisation with feral and domestic cats.

Now in Scotland a well-organised trapping programme is catching animals that seem to be wildcats. They are vaccinated and DNA tested.

Those that prove to be pure wildcats are released to breed. Hybrids are neutered so that when they are released they cannot breed.

Britain once had a larger native wildcat, a species of lynx, but it was hunted to extinction centuries ago.

Now some naturalists are suggesting we bring back wild lynx to our countryside.

It is, as you would expect, a controversial idea. Some people, Frosty included, would love to see these elegant tiny tigers stalking the huge plagues of escaped ornamental deer that are causing havoc in our woodlands. The cats would boost wildlife tourism in many areas too.

One favourite for any reintroduction is the Iberian lynx (Lynx pardinus), which is the most threatened species of wildcat on Earth — down to fewer than 500 animals in the wild — far rarer than any full-size tiger.

If this animal becomes extinct, it will be the first lost feline since prehistoric times.

The Iberian lynx is the closest surviving relative of the original British lynx.

It eats rabbits — a non-native species brought to Britain by the Romans.

It would be useful to control rabbits, but it is not really large enough to have much effect on our plague of nearly two million small muntjac and Chinese water deer.

An alternative is the bigger Eurasian lynx. This would make our wild food chain more natural, boost tourism and control non-native small deer.

They do sometimes take grouse and pheasants, which will bring them into conflict with landowners and our hunting ’n’ shooting Prime Minister and Tory government.

I don’t think we should worry about offending Johnson or the shooting estates that make such a monoculture mess of vast tracts of our moorland and other countryside.

Thousands of us support charities to save the tiger all around the world. Should we not welcome back our own miniature tigers to bring back a little excitement, red in tooth and claw to our own countryside?