Unionising sex workers has been called the ‘cutting edge’ of the class struggle by radicals. JOAN HARDWICKE asks - what results have workers actually seen?

The past 18 months has seen an increased profile for this topic with huge amounts of media coverage generated alongside the issue becoming a talking point among swathes of the left.

While talk of workers organising for change is always welcome, it’s important to interrogate exactly what we mean by “sex work organising” and examine the results that it produces in real life — especially if it is being held up as a radical example that the wider labour movement should support. 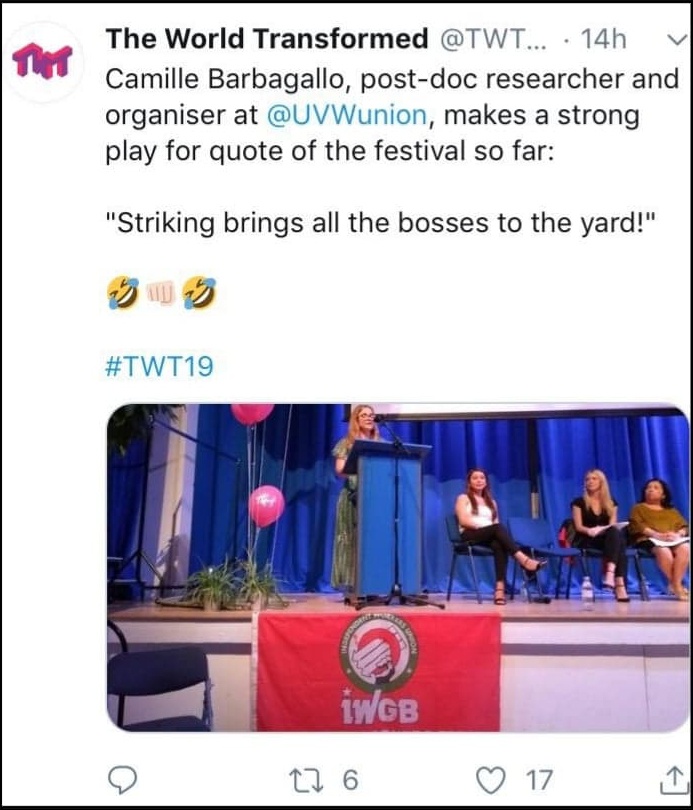 For instance what exactly is a “sex worker?” In the two unions that have taken up the mantle as vehicles for sex workers, the GMB and the United Voices of the World (UVW), the category encompasses a wide variety of jobs ranging from prostitute, cam girl, stripper, pornographic actor etc.

While ostensibly it may make sense to group these activities together, they have wildly different economic and legal statuses ranging from employee to self-employed. In the case of the GMB’s sex worker branch, up until recently it even included employers (which in itself raises questions as to what sort of union structure has bosses and workers in the same branch?)

For instance in the case of strippers it could be argued they face many of the same issues as hospitality workers in the gig economy, but the same argument could not be applied to a self-employed prostitute with no employer or employees.

The nature of one’s economic status is after all pretty much the determining factor in whether one is a worker in the first place. Likewise, with prostitution itself, there is no single set of conditions — the escort earning £500 a day for services that may not include sex is far removed from the woman forced by poverty and addiction to sell her body in parlours, cars and street corners; how many of the latter are represented in both of these union campaigns?

Secondly, despite many people proclaiming themselves to be “organisers of sex workers,” with funding coming from a variety of sources and charities, plentiful mainstream media coverage, political support from many left-wing groups and a plethora of blogs and opinion pieces — what actual industrial results have been achieved in Britain by these “organisers?”

The 'Sex Witch Anarchy Variety Hour' took place on Monday September 23, another event showing the strong focus on sex work at the fringe.

Estimates are that there are roughly around only 150 sex workers of all volitions in both of these unions combined, which — without sounding flippant — is largely a poor return for any organising campaign which is at least 18 months old.

Considering many strip clubs are under threat of having their licences revoked for often being hotspots for sleaze and sometimes organised crime, far from being hostile to a token union deal, many owners are happy to give a partnership recognition deal as it makes them look better in the eyes of the council, and more generally rehabilitates their image as liberal humanitarians as so many “ethical capitalists” and “good bosses” are eager to do nowadays.

In the case of the UVW, activity seems to be limited to advocacy and the occasional fundraising party featuring the titles like “Paradise Bordello” where naked women strip in front of an assembled crowd to the theme of an “Carmen Noire, The Modern Whore – an exploration of a young French courtesan as she sensually gets ready to see a client” (so much for the repeated declarations of some advocates “not wishing to glorify the sex trade”). 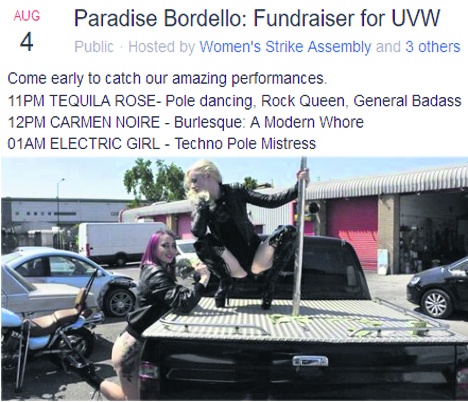 The prospect of trade union events featuring naked women gyrating on a stage has understandably alienated some members of both unions; and the question has to be asked — if a branch of bus drivers or refuse workers decided to hire strippers for a union event would it benefit or reduce the collective position of and attitudes towards women in that given branch or union?

Despite the profile generated around both of these unions’ sex worker branches there has yet to be a single industrial dispute. There hasn’t been one strike, one walkout, one industrial ballot, or one collective grievance take place. For a supposedly vibrant grassroots campaign there has been a pronounced lack of collective actions that signify worker-led organising.

Of course there are difficulties inherent in organising sex workers — however the UVW generally thrives in these conditions and has been able to organise precarious migrants (notably cleaners) in dire poverty into successive strikes — so why hasn’t this been replicated for sex workers?

If Deliveroo gig economy workers can organise why can’t gig economy strippers? Is genuine organising actually going on? For an outsider looking in, it seems that rather than an industrial union campaign taking place, what we are seeing is actually an advocacy campaign for the decriminalisation of prostitution only dressed up as an organising initiative with a view to building power in the workplace.

Across Britain we have seen women leading strike action for higher wages and better conditions; equal pay strikes in Glasgow, migrant cleaners in London, MITIE workers in Sellafield and many more. They’ve been fighting, and in their thousands, they’ve been winning. And they have much to teach the rest of the workers’ movement. Surely these are the women and struggles we should be seeking to platform at Labour events?