The story of International Workers’ Day through trade union posters

LORNA MILLER has been designing May Day celebration posters since 2014. Here she takes us through her dazzling art work over the years – and explains the thinking behind her creations

IN 2014 I was asked to design the Glasgow May Day poster and I’ve been doing it most years since.

Every year has had a theme linked to local and international, past and present trade union activism. 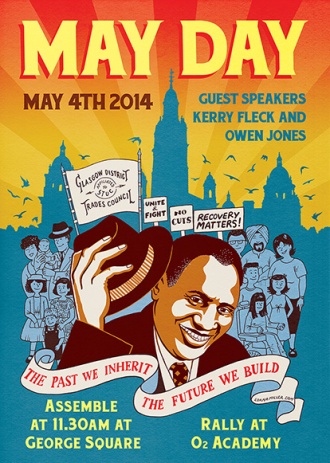 This poster was based on US singer, actor, athlete and activist Paul Robeson leading the May Day march in 1960.

Film footage shows him doffing his cap to the huge crowd who were cheering him on: he had an enthusiastic welcome from 10,000 people.

I created an image that linked this wonderful moment in history with the theme that year of the impact of austerity policies on the majority of citizens. 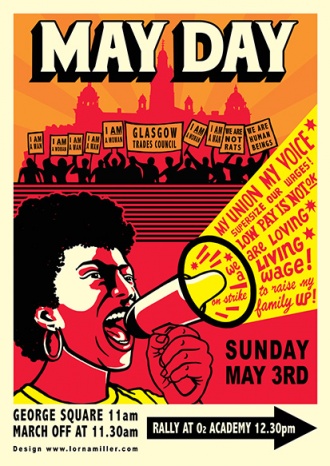 The 2015 poster also linked present and past international protest.

The theme for the 2015 May Day Festival was young people who face the brunt of the unjust, capitalist system of austerity, enduring insecure low-paid employment and zero-hours contracts.

At the May Day festival there was a live link with the US Fast Food Forward Movement, which is a movement of New York City fast-food workers campaigning to raise wages and gain rights at work including union representation.

Their campaigning acted as a springboard for other movements, including Black Lives Matter.

Since their first strike in 2011, they have won wage increases for 22 million Americans, including tens of thousands in New York State. 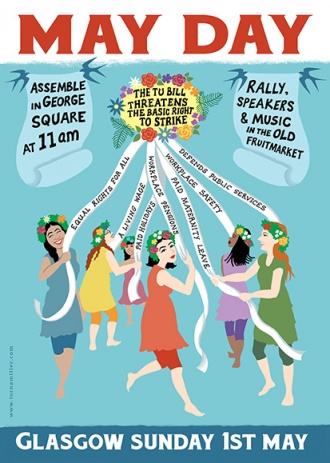 In 2016 I created a version of the May Day maypole, a tradition associated with European folk festivals.

May Day is also the ancient celebration of spring and rebirth — the traditional time for planting new seeds in old ground.

I wanted to bring a spirit of joy and optimism during a time when the introduction of the Trade Union Bill represented the biggest assault on working people’s rights in living memory.

It was a deliberate attack on public-sector trade unions and shifted the balance of power in workplaces towards the advantage of employers and away from workers.

In spite of this, a united movement was created which resulted in heavy blows to the Conservative government’s plans. 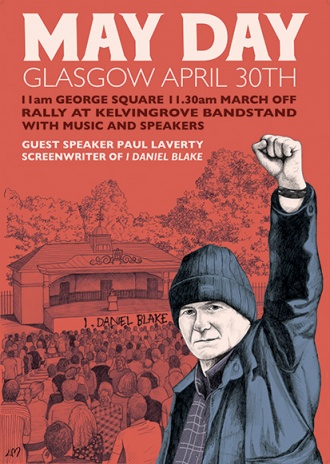 The theme of the 2017 poster was the Ken Loach film, I, Daniel Blake; the screenwriter Paul Laverty was the May Day festival guest speaker that year.

We had to ask permission to use the iconic image of Daniel with his fist defiantly raised, which was well known from the film’s promotional material.

I drew a graphite pencil version of it. In the background, I drew Kelvingrove bandstand as it would look on the day of the festival, filled with people.

It was a triumphant victory of community activism that the bandstand could be used at all.

The determined people of Glasgow had brought it back to its former glory after many years of committed campaign work. 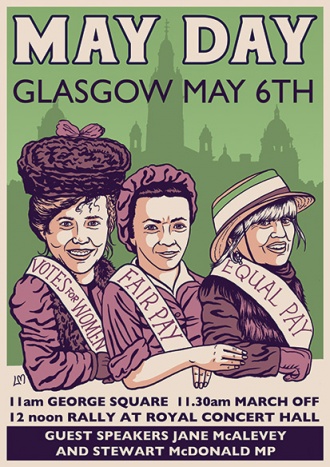 My 2018 poster brings together Glaswegian female activists from different decades that fought for equality through the trade union movement.

Mary Macarthur (1880-1921), on the left, was a suffragette who had rebelled against her Tory family to become chair of the Ayr branch of the Shop Assistants’ Union.

To the right of Mary is Agnes McLean (1918-1994). She was a trade union activist for workers’ rights and a councillor from Glasgow.

Next to Agnes is Denise Phillips, a Unison activist and homecarer. Denise marched with hundreds of women as part of Unison’s equal pay campaign in 2018. 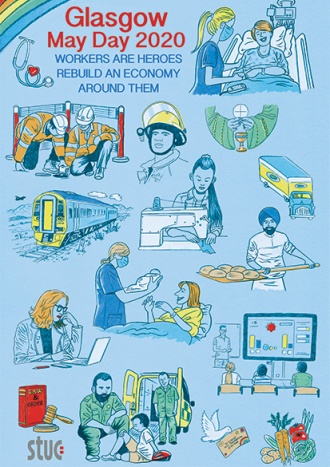 I started working on my next poster during lockdown 2020 and I was feeling terribly ill; I had caught Covid-19.

I had no idea that it was the beginning of two years of chronic illness and fighting for treatment and support with thousands of others, many of whom I was celebrating in the poster.

Many front-line workers were left on their own to survive long Covid, loss of work, financial difficulty, medical gaslighting, mental health strain, family problems and more.

Trade union activism continued to be a force against state dereliction and inefficiency. Sadly, the poster wasn’t printed and the May Day Festival took place online. 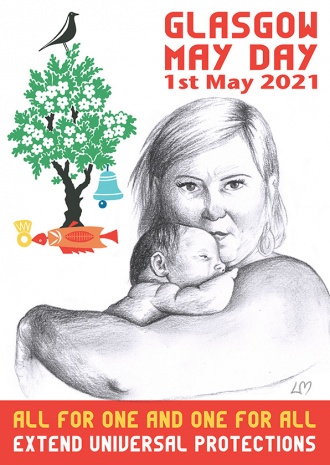 The theme of 2021 May Day was the extension of universal protections: specifically free school meals and promotion of the campaign for free public transport.

Universal protection of the NHS was recognised as being fundamental for recovery and by extending these protections, some of the inequalities and poverty in Glasgow could be tackled.

The image of a mother and her child was based on a photograph of Debbie and her newborn baby from Anderston, Glasgow, by documentary photographer Kirsty Mackay.

I used charcoal for the drawing, creating a softness that worked well with the serious, determined expression of the mum. 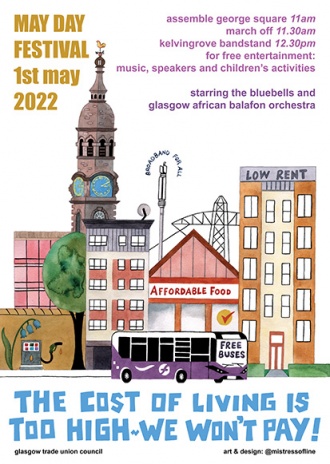 I have just completed the 2022 May Day Festival poster. The theme this year is the cost-of-living crisis.

Free public transport was provided for Cop26 delegates and attendees in Glasgow in November 2021, which led to people calling for permanent free travel for all.

A motion passed by the council recognised work of campaign groups Get Glasgow Moving and Free Our City and led to Susan Aitken, leader of Glasgow City Council, requesting a trial scheme.

The transport minister said this wouldn’t be possible: money was needed to keep public transport running, coping with reduced passenger numbers and staff shortages during the pandemic.

Designing the posters has always been a wholly collaborative process with Glasgow Trades Council: special thanks to chair Jennifer McCarey.

It has been an opportunity to experiment with materials and style and for an artist this is always beneficial for growth.

Earlier in my career I created comic art for children’s magazines, was a digital colourist and wrote, drew and designed my own comics.

It was good practice for learning a variety of skills (most self-taught) that has enabled me to create the poster designs. The work of an artist, even a commercial one, is often shrouded in mystery.

Tuesday 05th Jul 2022
Mexican president calls for Statue of Liberty to be torn down if Assange sentenced in US
Tuesday 05th Jul 2022
Communist Party of Ukraine banned and all its assets seized by the state
Monday 27th Jun 2022
German journalist faces three years prison over reporting from eastern Ukraine
Monday 04th Jul 2022
‘Today it is the RMT who need the support of other unions’
Monday 04th Jul 2022
The world has lost of a man of ‘peace, justice and love,’ family, friends and well-wishers hear at Bruce Kent's funeral
Join the 501 Club