Taking back the billboards

“When brands advertise on our street structures, they become part of the public social space, entering people’s thoughts and conversations.”

SO READS the unapologetic sales pitch of billboard giant Clear Channel. Consumer advertising has become so ubiquitous in our streets, on our phones, our websites, on public transport that it feels inescapable.

Often we have little choice as to whether we engage with it. Advertising has become the cultural water we swim in; re-enforcing the messages, priorities and ideologies of consumer capitalism at an everyday level.

The effect of companies bombarding us thousands of times a day is that, through the power of repetition and carefully presented imagery, big brands can portray a shiny version of themselves that masks their more destructive practices. This can leave us feeling subtly deceived; similar to when speaking to a dodgy salesman pushing a hard sell. 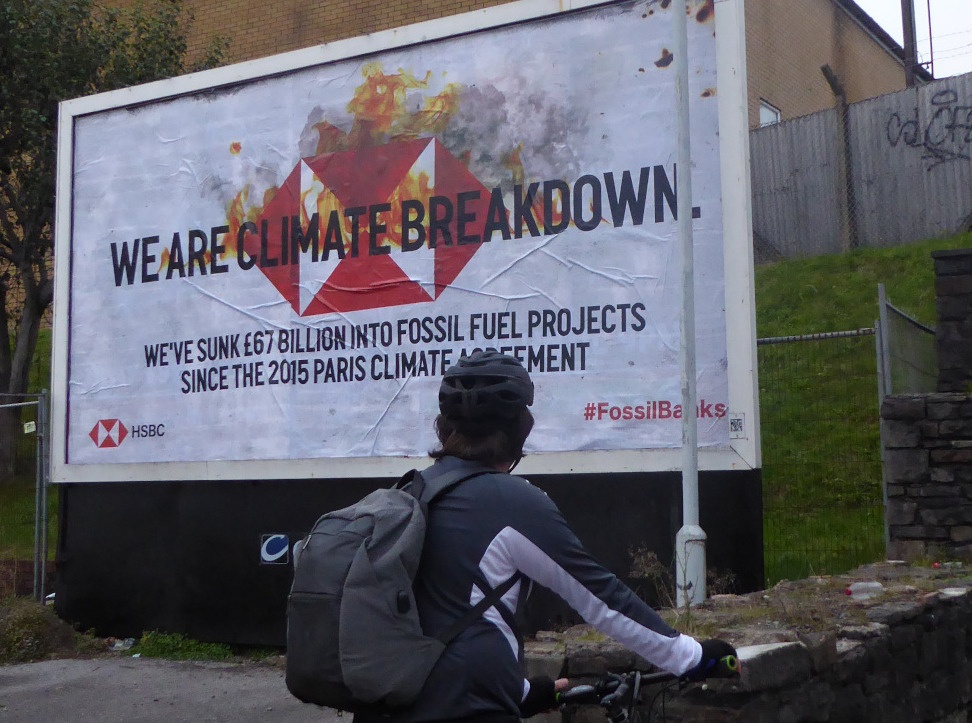 A guerilla billboard installation in Swansea. Artwork by Matt Bonner.

“Subvertising” a portmanteau of “subversion” and “advertising” is a long-running tradition of speaking back to adverts by altering, removing or replacing their messages to reveal new meanings. The practice is as old as advertising itself and in the 1950s formed part of the Situationist International calls for “detournement” (meaning “re-routing”) to turn “expressions of the capitalist system and its media culture against itself.”

Recently the advertising campaigns of two industries, banking and cars, have received nationwide attention from teams of subvertisers from the Brandalism network. Armed with satirical poster artworks, pasting brushes, ladders and high viz jackets, hundreds of billboards, bus stop and tube ad spaces have been hijacked to provide the information omitted by brands such as HSBC, VW, Ford, BMW and Lexus. Let’s take a tour of these detournements. 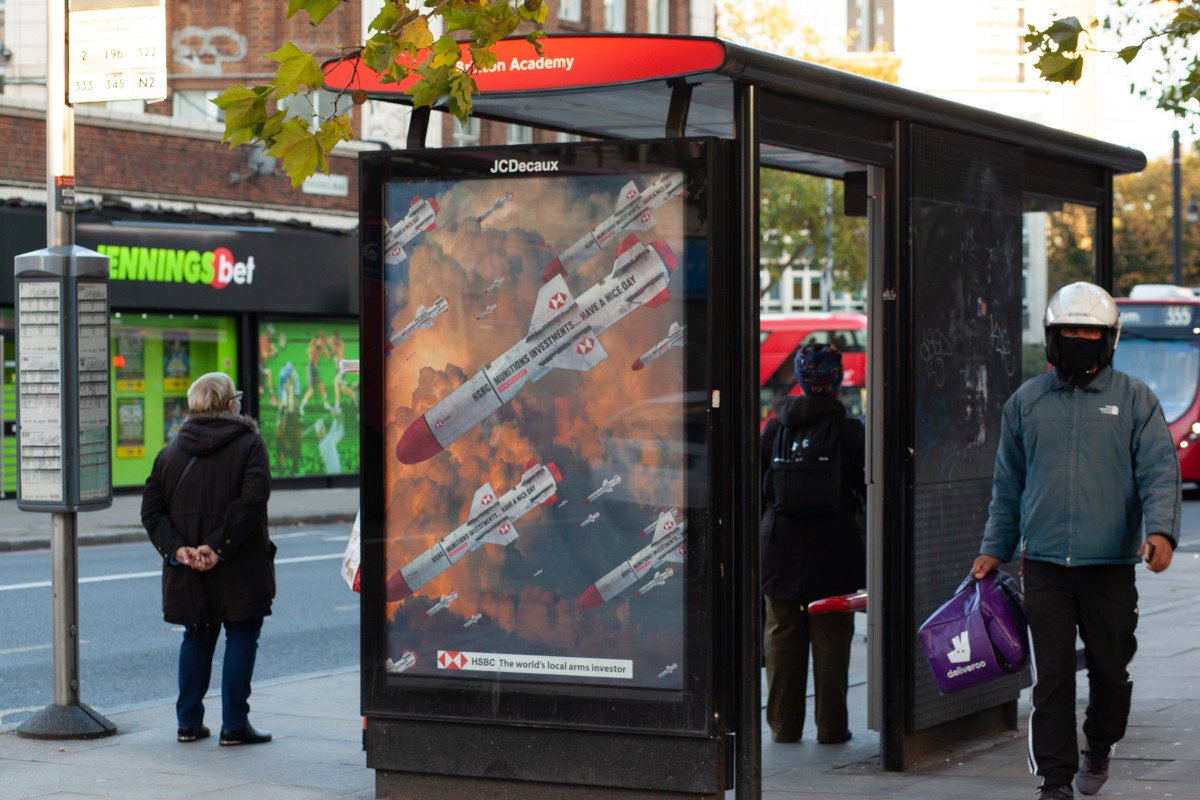 HSBC’s logo has become a familiar site on ad spaces, high streets, airport buildings and British Cycling sweatshirts. Headquartered in Britain, but making most of its money in Asian markets, the bank has recently been identified as one of Europe’s top financiers of fossil fuel projects — second only to Barclays.

Since the Paris Climate Agreement was signed in 2015, HSBC has provided a whopping £67 billion in finance to coal, oil and gas projects. In 2012, the bank was also hit with a with a hefty £1.4 billion fine by the US government for drug money laundering and the FinCEN files in 2020 singled out HSBC in particular for knowingly washing the profits of Ponzi scheme fraudsters through its accounts.

When your business is embroiled in this much destruction, big banks need advertisers to shore up their public image and create warm fuzzy feelings towards them amongst consumers.

Amidst the Brexit turbulence of 2019, ad giants Wunderman Thompson described the challenge of rehabilitating HSBC’s brand: “Britons had lost sight of what HSBC stood for, allowing the majority of potential customers to believe it was largely a bank for wealthy foreigners.”

Wunderman Thompson went on to plaster Britain with HSBC’s billboards declaring the bank’s internationalist values. We Are Not an Island declared its posters and TV ads unconvincingly trying to claim the ads had nothing to do with Brexit. 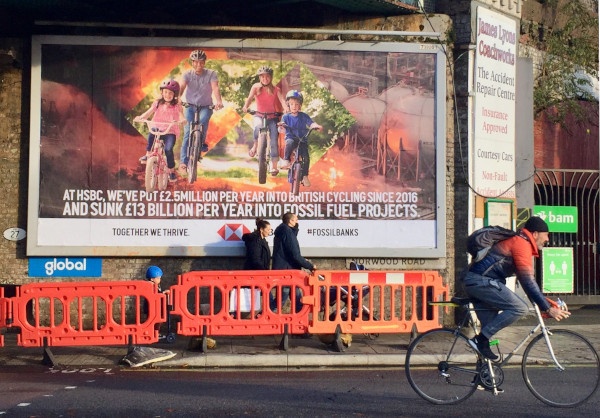 The campaign also used a classic trick from the advertising playbook of co-opting local cultures (or at least some over-cooked cliches) to produce local city variations of the campaign: You are Manchester, You are Birmingham, You Are London. By layering HSBC’s logo over the top, the implicit message tried to communicate “you are HSBC and we are you.”

Subvertising by groups such as Special Patrol Group and Brandalism provide a stern rebuttal to this attempted co-option. Purchasing outdoor ad spaces at this scale is only available to big companies — so guerilla subvertising also presents an active rejection of the visual enclosure and one-way communication of corporate messaging in public space.

Environmental campaigners have also used subvertising tactics against car company adverts particularly highly polluting, over-sized SUVs. Marketing departments have presented car ownership as the ultimate status symbol: it will make you cool or successful or respectable or a family provider or all of the above. 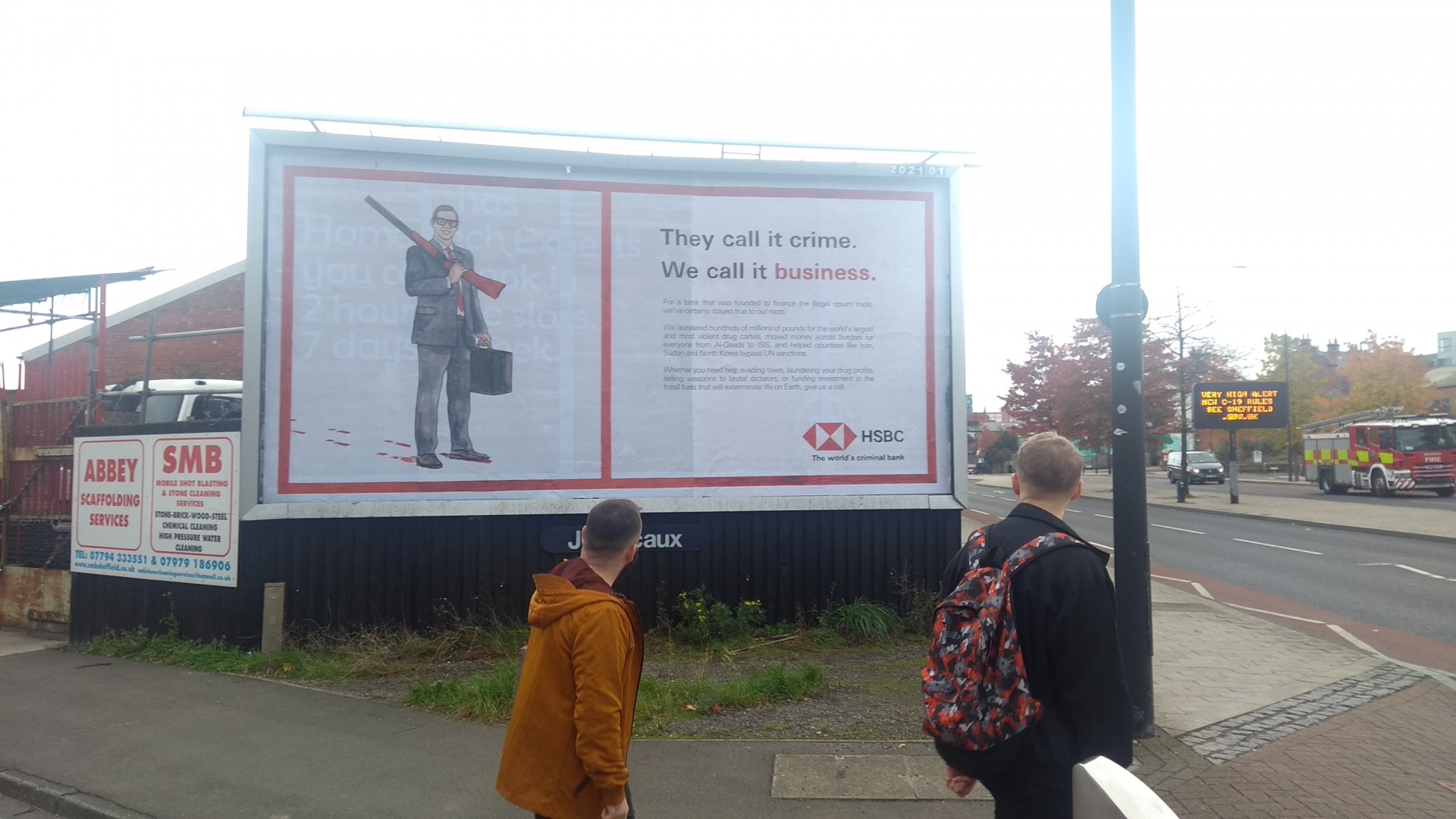 A guerilla billboard installation in Sheffield — artwork by Darren Cullen.

Commercials typically feature vehicles surrounded by plenty of space in exotic rural locations, driving on beaches, through mountain passes, deserts and canyons. The reality for many urban communities, however, is lethal levels of air pollution, worsening congestion and rising greenhouse gas emissions. Again these are notably absent in the ads.

The absurd situation of billboards being used to promote new cars to motorists stuck in traffic jams is now playing out in many towns and cities.

Drawing comparisons to the ban on tobacco advertising, NGOs such as Possible and the New Weather Institute are now calling end to advertising for SUVs and the most polluting cars. Other organisations such as the Purpose Disruptors are also arguing for change from within the industry itself — as concerns about climate breakdown grows amongst its workforce. 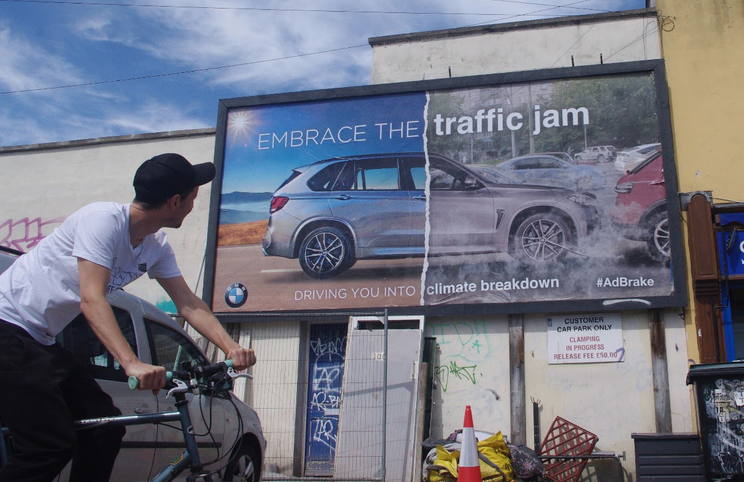 Beyond the critique of particular industries or brands however — the wider systemic critique of advertising’s role in the economy and the climate crisis remains unanswered by the industry.

That is, if the fundamental role of ad companies is to continue the growth of sales — to implore us to buy ever increasing amounts of new stuff — how can this constant extraction of raw materials and energy fit within planetary boundaries?

How can we raise living standards, meet our needs and create a flourishing good life for everyone — beyond the consumerism promoted by advertisers? Reclaiming, removing and re-purposing advertising spaces seems a good place to start.

Tona Merriman is a co-founder of Brandalism. Their Street Ad Takeover Manual is available to download for free. 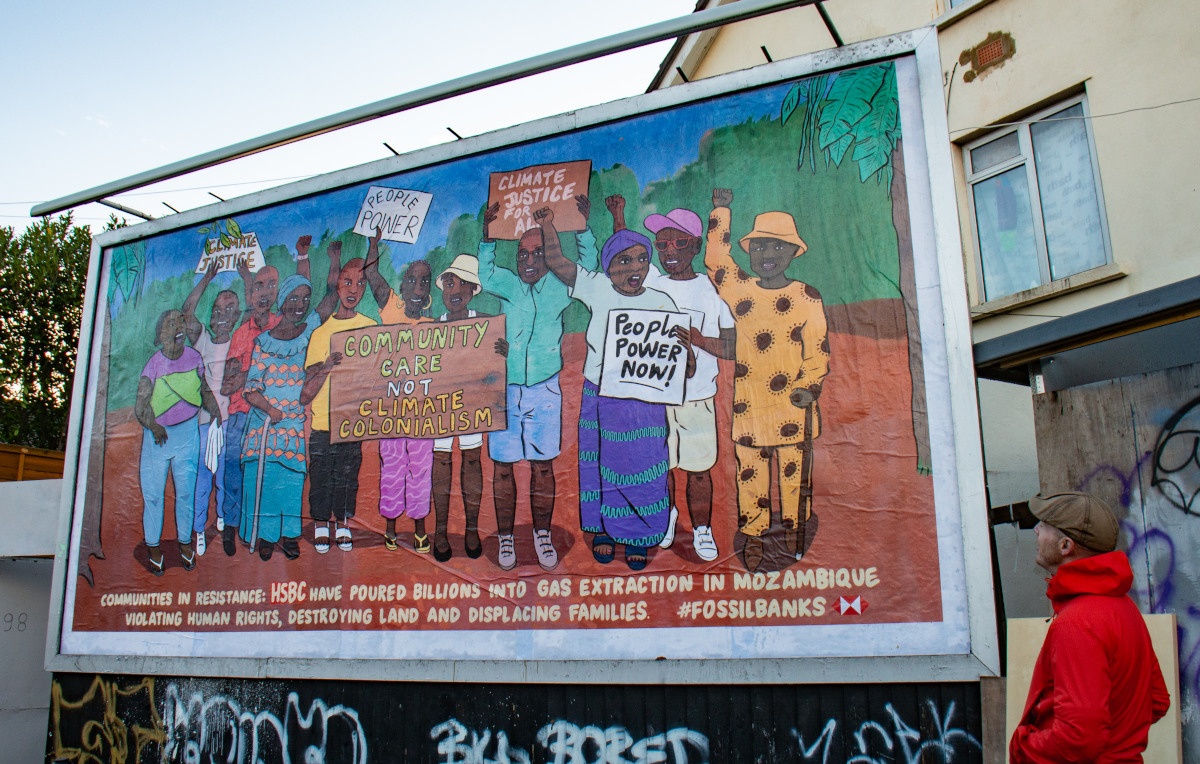 Subvertisers can bring in voices of communities impacted by HSBC’s fossil fuel investments such as the 550 families displaced by a HSBC-financed gas project in Mozambique — artwork by Rudy Loewe.

Police race plan will have ‘no long-term impact’, campaigners warn