The making of a mental-health activist

RUTH HUNT tells the story of a mother forced to take matters into her own hands, first to investigate her son's death and then to reform the mental-health system that failed him

The more Caroline Aldridge learnt about mental-health services, the more she became aware of poor behaviour by staff and managers on a national basis
×

CAROLINE ALDRIDGE didn’t think she would need to become an activist after her son Tim died aged 30, even though she knew he had been waiting for a long time for the right kind of treatment from the mental-health trust.

At the time she worked for the same trust, so only days after Tim had died, she offered to help so other service users and their families wouldn’t be in the same position.

Rebuffed by the trust and instead treated in a way she found deeply offensive, she began to realise her experiences were not isolated.

Other service-users were subject to poor mental-health treatment such as being stuck on waiting lists for years, long-term hospitalisation and violent restraint. Along with this was the rising number of unexpected deaths and service users taking their own lives on wards and in the community.

As a result, Aldridge felt she had no choice but to join other campaigners and use her voice — but first she needed to find out the truth about what had happened to her son.

Aldridge discovered that despite Tim having a diagnosis for bipolar disorder, he was rarely seen by mental-health services.

At an assessment in February 2012, the clinician noted Tim appeared “unkempt and anxious.” In this appointment, Tim described his difficulties with sleep and dealing with day-to-day activities, including self-care.

Even though he was extremely unwell he was inexplicably deemed as “not ill enough” to meet the threshold for treatment.

“In many ways,” Aldridge said, “Tim was caught in a trap. He was too unwell to engage in community services but not ill enough to be detained for assessment and treatment.

“Community services were decimated in our area due to cuts, so he was left to ‘get on with it’ without any help.”

Two years later Tim was found dead in his flat. He was one of 139 unexpected deaths in that trust that year. That was a jump from 55 deaths the year before.

His psychosis and paranoia had led to a deterioration in his self-care, with bin bags of rubbish piled up inside his home as he was too scared to leave his flat. His body had suffered the toll of 15 years of poor health and self-medication.

When he died, he was still on the list waiting for an appointment with the mental-health team. During the months before his death, Aldridge was desperately trying to access help for Tim, but could the fragmented and underresourced services really help?

Aldridge knew there were a combination of factors ultimately led to Tim’s death. The first was his fear of being hospitalised after a traumatic inpatient stay in Plymouth. This led to mental-health services describing him as “challenging” and as someone who “refused to engage in services.”

Secondly, it took 10 years before Tim was finally diagnosed as bipolar. He was “parked” on a never-ending waiting list. The only help he did get was medication that Tim didn’t always take properly due to the side effects. To take the edge off his symptoms he often resorted to alcohol and cannabis as a form of self-medication.

Finally, and most importantly, there had been a complete failure by the trust to monitor, co-ordinate and support Tim. 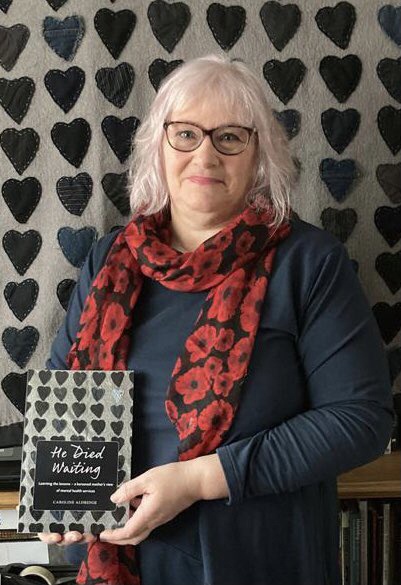 When Tim died, Aldridge received a letter from the trust. As she worked for them, she had expected something more personal than what she received, but later on, she found such anodyne responses were part of the procedure when there had been a death.

This arms-length approach was set to continue, with Aldridge treated as a potential problem rather than a grieving mother.

Aldridge said: “It was disappointing, frustrating and, ultimately, damaging that they took such a defensive approach.”

Following on from the inquest, the trust completed a serious case review. This report managed to contradict itself even with the cause of death. The first explanation, that it was an overdose, was false; the second, that it was unascertained, true.

Other problematic areas included when the trust said Tim had discharged himself in February 2014. In fact, Tim, who at this stage was very ill, missed an appointment. The service used that as a justification to discharge him.

Tim feared mental-health services, so it was a sign of his desperation that he asked his GP to refer him in April and again three months later. Despite the urgency reflected in these referrals, the response was to set up an appointment months later on September 24 2014. Tim died on September 7.

Ultimately, the serious case review ended with no recommendations. That conclusion was so at odds with what Aldridge was starting to uncover, such as the lack of communication between teams resulting in Tim being lost in the system, mental-health staff visiting Tim without the correct diagnosis and case history, resulting in no action being taken despite the very obvious difficulties Tim was experiencing.

When Aldridge had stopped working for the trust, she felt more able to speak out. She wrote to Norman Lamb MP, who informed her Verita would be doing an investigation into the services and that it might be a good idea to give evidence to this body. Verita is a specialist consultancy that provides independent expertise to enable regulated organisations to improve their services and outcomes.

“Reading the Verita report in May 2016,” Aldridge said, “I saw the cluster of deaths in my area that included Tim. I could see how much our experiences were mirrored with other families. I also realised I should’ve been offered the Verita investigation report, something that I had to ask again and again — and was only given it by what the trust representative called a ‘favour’.”

The Verita report stressed the problems families had in dealing with the trust after a death.

“We have concerns about the trust’s current process of engaging and supporting families. It would be more constructive if the trust were to meet families to offer condolences and outline any investigation to be undertaken, rather than doing this by written correspondence.”

It also outlined the concerns about patients like Tim who had been discharged from services without support. These included:

In all, where the trust found no recommendations, Verita found 19, many of which were applicable to Tim. All needing urgent action.

Aldridge’s initial view of mental-health staff was positive, believing that like her, they were honest, trustworthy and competent. Unfortunately, the more she learnt about mental-health services, the more she became aware of poor behaviour by staff and managers on a national basis.

This was evident in Melanie Leahy’s struggle to find out what truly happened to her son Matthew, who was found dead, aged 20, a week after being admitted to the Linden Centre in Essex.

The Parliamentary & Health Service Ombudsman report into his care listed multiple failings, including staff failing to act on trust policies regarding rape and sexual assault. Following his death, further reprehensible behaviour was revealed by the ombudsman report when it came to light that senior staff had falsified a care plan and slipped it into Matthew’s medical records.

Leahy has entered the ninth year of her fight for the truth and she still maintains there is more to learn about what happened to her son. In 2019, the ombudsman called for further investigations to take place into her son’s death, but to date this hasn’t happened. After a petition calling for a statutory public inquiry and debate in Parliament, the government called for an independent inquiry into the Linden Centre. She doesn’t feel this is sufficient, so, along with another 66 families, is campaigning for a full public inquiry.

Leahy said: “By securing the first-ever mental-health statutory public inquiry, we can make history, so that we can ultimately force improvement to every aspect of treatment and care in both hospitals and the community.”

Like Leahy, Aldridge is now a powerful campaigner. As part of her work to push for change in services, Aldridge has written He Died Waiting. The book tells the story of her son and how as a family they coped with his death. The aim is to inform and change the way mental-health staff interact with bereaved families.

Those bereaved like Aldridge and Leahy should not be viewed as a “problem” or people simply seeking litigation when their main motivation is for truth, justice, accountability and change so that other service users and their families don’t have to suffer in the same way as them.

Ruth F Hunt is a freelance journalist and author of The Single Feather (Pilrig Press).

When life is difficult, the Samaritans are there day or night, 365 days a year. You can call them for free on 116 123, email them at [email protected], or visit samaritans.org to find your nearest branch.