The US presidential elections and the prospects for peace

Might the US ruling class be willing to step back from a potentially calamitous new cold war, asks CARLOS MARTINEZ

THE most significant foreign policy component of Donald Trump’s four years in the White House has been the US’s increasingly hostile stance in relation to China.

While Trump has led a dangerous escalation, the general direction of travel is not significantly different from that of the Obama administration, which pointedly kicked off the reorientation of US global strategy from Middle to Far East with its “Pivot to Asia.”

This shift in US-China relations from co-operation through containment to confrontation is most likely a long-term fixture, driven as it is by historic changes in the global economy.

To the extent that China’s extraordinary growth in the earlier part of the reform and opening up period was driven by low-cost, low-margin, low-tech, large-scale manufacturing within Western-led supply chains, the US felt that its interests were sufficiently well served that it could accept China’s emergence as a middle-income country.

Indeed, the abundant supply of cheap, competent, diligent and well-educated Chinese labour has made a lot of people in the United States very rich.

But China’s strategy was not aimed at permanently playing a subservient role in a globalised economy dominated by the US and its allies.

As Yang Weimin, a senior economist in the Chinese government, said in 2018 in reference to the nascent trade war: “You can’t let China only make T-shirts while the US does high-tech. That is unreasonable.”

China is gradually shifting towards a leadership position in the global economy.

Furthermore it is — horror of horrors — a non-white, non-capitalist country that aspires to build socialism. As such it is considered a serious threat to contemporary US-led capitalism.

This is the principal trigger for the new cold war: it is the reason the US has started to prioritise China containment over all other foreign-policy concerns.

The Obama administration adopted a relatively sophisticated, multifaceted and multilateral approach, designing the Trans-Pacific Partnership, installing a US marine base in Australia, strengthening the US’s relationship with its traditional European allies and quietly encouraging Japanese rearmament.

Barack Obama was explicit that the purpose of his “pivot” was to preserve US hegemony: “We have to make sure America writes the rules of the global economy.

“And we should do it today, while our economy is in the position of global strength.

“Because if we don’t write the rules for trade around the world — guess what — China will.”

Nevertheless, the overall anti-China strategy was accompanied by some level of sensible co-operation with Beijing, particularly around environmental issues: the Paris Climate Agreement came about in no small part due to the co-ordination between Obama and Xi Jinping.

The Trump administration has continued along the same overall path of hostility and containment, but without the sophistication and multilateralism. 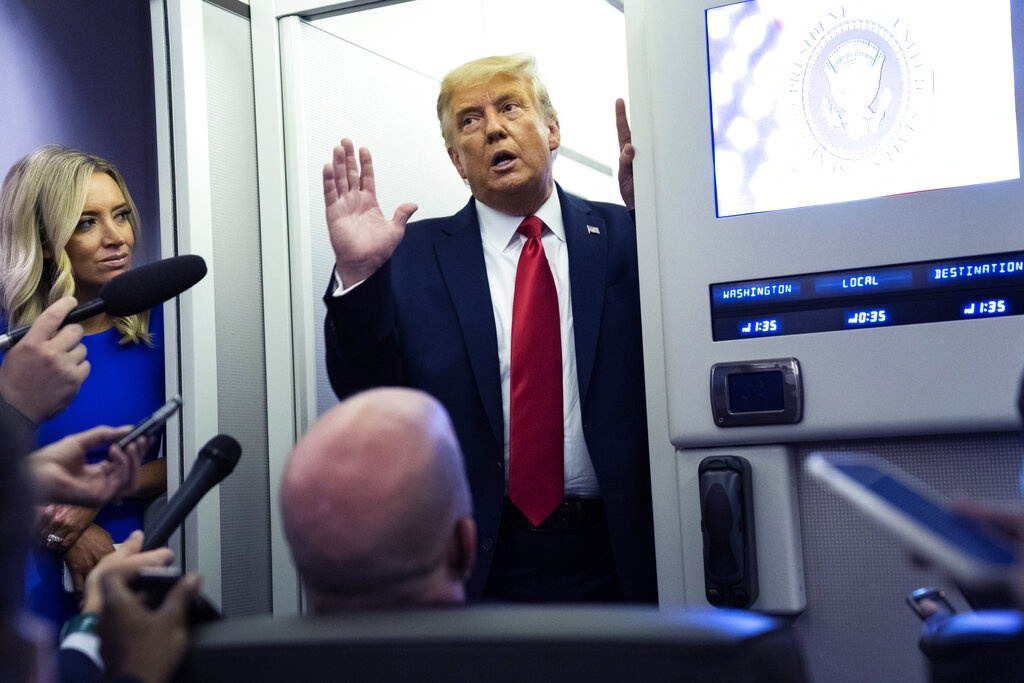 Its approach has instead been characterised by overt threats, bluster, blackmail, demagoguery and racism.

Anti-China rhetoric was a key plank of Trump’s 2016 presidential campaign. Trump told his interviewers and his rally attendees: “We can’t continue to allow China to rape our country and that’s what they’re doing.”

He repeatedly described China’s trade imbalance with the US as “the greatest theft ever perpetrated by anyone or any country in the history of the world.”

The decline of US manufacturing was blamed on Chinese currency undervaluation — and of course weak presidents like Bill Clinton who had allowed the Chinese to get away with murder.

Needless to say, Trump’s line of argument is ludicrous and unsubstantiated. The US has benefited enormously from China’s rise, and its failure to reinvest strategically and upgrade its own economy is the fault of its own myopic ruling class.

Singaporean academic and former diplomat Kishore Mahbubani puts it succinctly: “The American people would be far better off if America stopped fighting unnecessary foreign wars and used its resources to improve the well-being of its people.”

Furthermore, as writer Martin Jacques points out, China’s accumulation of US treasury bonds has “allowed Americans to continue with their spending spree, and then partially helped to cushion the impact of the credit crunch.”

Nonetheless, Trump’s demagoguery has performed its intended role. Significant sections of the US population have been persuaded to direct their anger towards China rather than towards the ruthlessness and decrepitude of neoliberal capitalism.

Trump and his top China hawks — Robert Lighthizer, Peter Navarro, John Bolton and Steve Bannon — thought they would be able to apply “the art of the deal” in order to win unfair concessions from China.

Essentially they wanted China to agree to buy hundreds of billions of dollars’ worth of US produce that it didn’t need, end state subsidies to key industries, allow US companies unrestricted access to Chinese markets while accepting tariffs on Chinese exports, and stop negotiating technology transfer deals with US companies.

In summary, the US negotiators wanted China to sign up to permanent subservience.

Unsurprisingly, the talks collapsed, and the US launched a trade war in January 2018, introducing tariffs on hundreds of billions of dollars’ worth of Chinese exports.

In 2019, the US government imposed a ban on Huawei, and pressured its “Five Eye” and European allies to do the same.

In 2020, it has sought to ban the popular Chinese-made apps TikTok and WeChat. 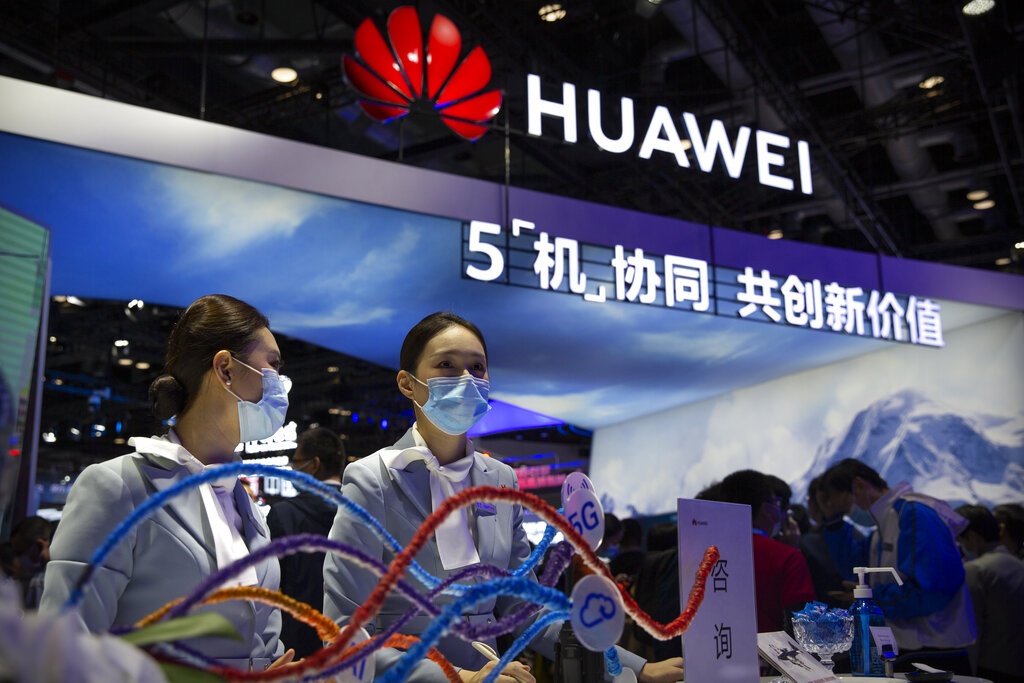 Meanwhile Trump has led US politicians and media in blaming the coronavirus pandemic on China, insistently referring to it as the “China virus.”

Alongside the president’s racist rants, the media propaganda around Hong Kong and Xinjiang has reached hysteria levels.

Parallel to the economic and propaganda attacks, there’s been a military escalation that includes ever more frequent US naval operations in the South China Sea and an enormous new weapons deal with Taiwan.

The US administration has relaunched the Quadrilateral Security Dialogue, a strategic co-operation network between the US, Japan, Australia and India, obviously meant to be an instrument of China containment.

There’s a significant chance that Trump will no longer be resident in the White House as of January 2021.

This would be a very good thing since, in spite of Joe Biden’s proven and outspoken commitment to the neoliberal imperialist status quo, Trump represents the most reactionary and dangerous section of the US ruling class: given his climate-change denialism, Trump’s presidency is quite literally a danger to the planet.

The question is: would a Democratic victory in November open the door for improved relations between the US and China?

Might the US ruling class be willing to step back from a potentially calamitous new cold war? 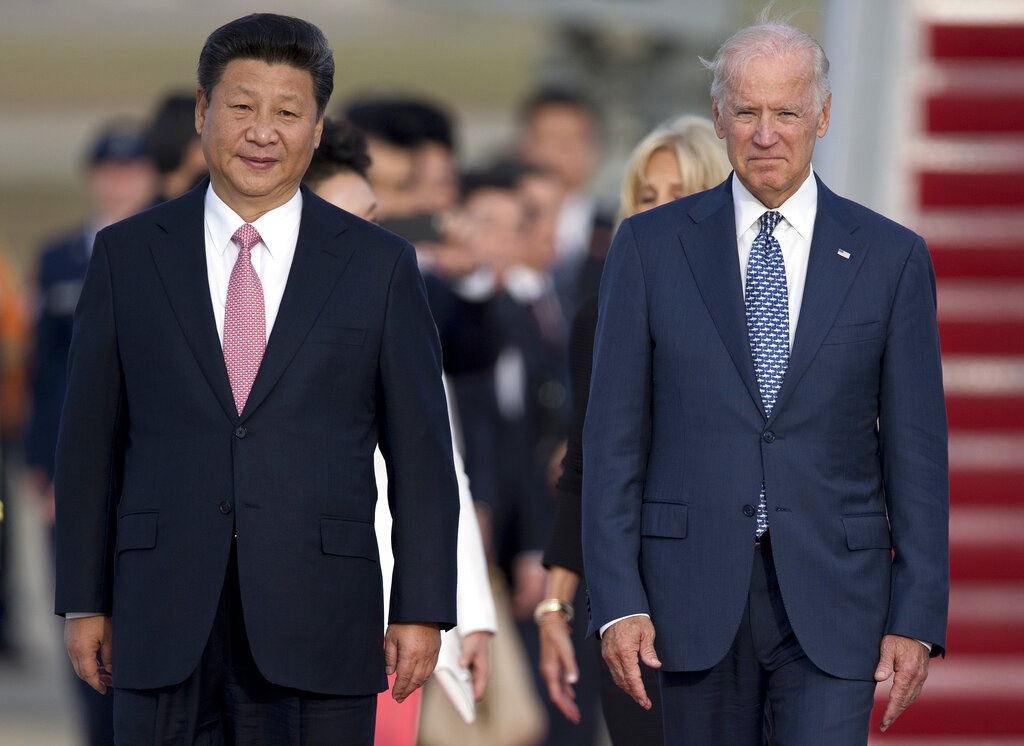 Chinese President Xi Jinping and then US vice-president Joe Biden, pictured in a file photo from 2015

It is rather unlikely that there’ll be any meaningful change in the US’s overall strategic position vis-a-vis China.

This has become an invariant of a declining US capitalism that’s determined to hold on to global hegemony via whatever means it can muster.

China is rising, and along with it a multipolar world order is coming into being, in which no single country will be able to act as “global policeman,” imposing its will and reaping the rewards.

A particularly acute problem for the capitalist class in the US is that China is set to surpass the US in the realm of digital technology: it is already leading the field in artificial intelligence and network infrastructure.

US companies have been pre-eminent in the digital world for several decades, and this has been the key engine of growth for US capitalism.

The household names of the digital era — Google, Facebook, Apple, Microsoft, Amazon — are based in the US, and their enormous profits flow primarily into US banks.

This is the context for the attacks on Chinese tech companies such as Huawei, ByteDance, Tencent and ZTE.

The desire to preserve US digital dominance will not go away with a change of president.

Similarly, the policy of military encirclement will remain in place, as will the propaganda war and blame game.

As US capitalism continues its inexorable decline, both Republicans and Democrats can be expected to try to build cross-class solidarity against the big external “enemy” of the era: the People’s Republic of China.

A Biden victory may allow the US to extricate itself from a trade war that has damaged the US economy significantly more than it has the Chinese.

This would certainly be a welcome development. Meanwhile, Biden can be expected to return to Obama’s multilateralism, and this is positive: even though the US concept of multilateralism is centred on building a broad alliance against China, it necessarily involves re-engaging with the UN and with international law.

Indeed, Biden has said that his administration would return the US to the Paris Climate Agreement, the World Health Organisation and the Joint Comprehensive Plan of Action (Iran nuclear deal).

On balance, then, the interests of peace would probably be better served by a Biden presidency.

The most reactionary elements of the ruling class throughout the world are certainly hoping for a Trump triumph, and aggressive China containment is a large part of the reason.

As Nigel Farage recently commented: “In terms of stopping China effectively taking over the world, the re-election of Trump is actually central to it.”

This issue will be one of the key themes discussed on Saturday October 24 — the No Cold War campaign is hosting a dialogue between the US economist Jeffrey Sachs and Chinese international relations expert Zhang Weiwei. The dialogue starts at 2pm BST, and takes place via Zoom. You can register at www.nocoldwar.org.