INTERVIEW When I heard about Julian, this hero, I thought: ‘I have to do something’

VIVIENNE WESTWOOD talks to Miles Ellingham about why she’s fighting to defend Julian Assange, land taxes and anti-capitalism, subsidies to industrial fishing, how playing cards can save the world, high street fashion and William Wordsworth

JULIAN ASSANGE’S trial resumed earlier this month. The Wikileaks founder was rearrested in the court’s cells two weeks ago over 18 new charges and now faces a potential 175-year jail term if it is ruled that he can be extradited to the US.

The trial proceedings sparked significant protest on the streets outside the Old Bailey from an unswerving group of popular campaigners willing to stand up for the fourth estate.

Among the protesters was Dame Vivienne Westwood, who has shown long-term, determined support for Assange — even leading a protest back in July from a cage, dressed as a canary.

Westwood has been a passionate supporter of Assange for years, and regularly attempts to sway both her high-fashion contemporaries and the public against his extradition by hosting events.

I attended the last of these — a “half fashion presentation, half demonstration” that she hosted in January at the Serpentine Gallery.

When I spoke to her then, in what passes in Westwood World for an interview, she touched on everything from Wikileaks to global capital, land tax and climate change.

“The problem is capitalism,” she begins, in her thick Derbyshire accent, as fashion-people in full costume hovered behind us, growing restless. 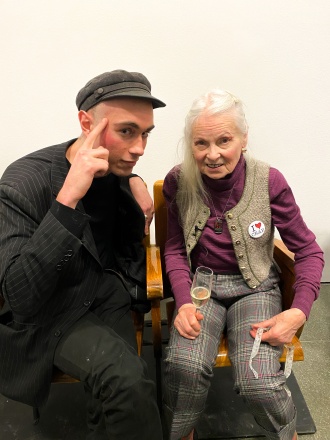 “The rotten financial system, it’s failing. We’ve all got to protest. It’s Armageddon when it crashes in 10 years’ time.”

“A solution is land tax. You’ve got to start charging people for the land. Governments have to hold it in communal trust and manage it properly and you have to start to get to where the real wealth is … Real wealth is land and it’s never been taxed.

“Government’s got to start doing the proper tax system, but they won’t because it’s in their vested interests as land owners and rulers.

“Whatever nature gives you free cannot be owned by private people.”

What Westwood was referring to here is a political notion highlighted in her 2019 No Man’s Land campaign, an effort to undermine the hegemony of what Vivienne calls Rot$ (her shorthand for “the rotten financial system”).

Her manifesto leaflet asserts that “the rental of land for the profit of the public is the only way to shed the shady history of the Rot$.”

“Sorry, am I lecturing you?”

“No! Not at all,” I say. The fashion-people behind us were looking bored. When is this underdressed journalist going to ask about something fun?

Two of those in line wandered off to take an ironic selfie with the security guard.

“Anyway,” she goes on, “one specific demand would be: Stop subsidies to industrial fishing. If you did that you’d get the oceans back in the next 10 to 30 years. If you don’t there’ll be no fish in the same amount of time. By which time it will all be too late, we’ll all be crashing.

“This year I have to do something … me … because I’m the only person with a plan.”

Westwood lives, as many successful creatives do, in her own universe. But her intensity is infectious: there’s this forceful innocence to her delivery that’s genuinely arresting.

And her money is, at least to some extent, where her mouth is. You’d be hard-pressed to find another fashion mogul who’d give so much as a seat at a gala dinner for a humanitarian or environmental issue.

Westwood, by contrast, offers personal commitment and financial support to numerous campaigning charities — notably the rainforest charity Cool Earth – and to Greenpeace, with which she has been on trips to the Amazon and the Arctic.

I ask Westwood about the “something” she had to do.

“Well, I’m going to work with all the NGOs to form a body of demands, and just work it out with government … if we get all the NGOs together, it would be the voice of the people.

“I’m also going to make these playing cards, which will display the problems and solutions. Then we’ll sell those and the money will go towards saving the rainforest. The NGOs can sell them. We can build support and some fundraising from all of this.”

Contemplating the world-changing potential of super-expensive, bespoke playing cards, I catch sight of a model trying to down some of the free champagne through a home-made Assange mask. The champagne dribbled down “Julian’s” paper chin. 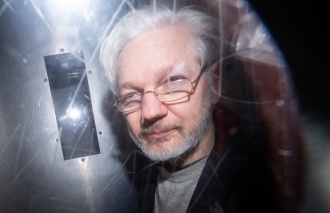 Julian Assange, who Westwood describes as a ‘hero’

“What inspires you about Assange?” I ask Westwood. Assange had been shackled and dragged out of the Ecuadorian embassy just the year before when his citizenship was suspended.

The Ecuadorian government listed grievances including recent “Wikileaks releases that they said interfered with other states’ internal affairs and personal discourtesies, like the failure of Mr Assange to clean the bathroom and look after his cat.”

The Ecuadorian government may have lost patience with Assange, but Westwood certainly hadn’t, and her vision of Assange was of a truth-crusader, a hero and a martyr of democracy.

“People ask me why I know so much about all this. It’s because I’m inclined to know. Because I care about suffering — and I did a long time ago.

“You don’t just get it if you read the corporate media, you get only lies.

“I was a punk, the best thing I left for punks was never believe a word the government or the press tell you … so when I heard about Julian, this hero, I thought: ‘I have to do something,’ and I kept at it.

“There’s a wonderful book called In Defence of Assange by Tariq Ali,” Vivienne informs me.

We had been interrupted. One of the fashion people couldn’t hold on any longer and leapt in front of me to introduce herself.

“Hello!” she says, “I saw your show in Paris! I saw your collection! Look at this dress! Did you know it’s my birthday?!”

“I’m just doing an interview at the moment,” replies Westwood, hardly taken aback, “but it’s nearly over, isn’t it?”

“But Vivienne look at this!” protests the fashion person.

“Just a second, dear,” mumbles Vivienne, turning back to me.

I found myself thinking: “These people finally get a moment with their idol and all they can think to talk about is themselves.”

The whole circus was exhausting, and I’d only been close to the epicentre for 10 minutes. But this is Vivienne’s life — how does she do it?

Aware that our time was running out, I finally get around to asking Westwood about fashion. The fashion industry is responsible for nearly 10 per cent of all global greenhouse gas emissions and consumes more energy than the airline and fishing industries combined.

It’s also responsible for vast wastelands of landfill, with around 87 per cent of the total fibre input incinerated or simply left to rot. I asked how we could make it all more sustainable.

This seems to bore her slightly.

“Well, I’m full of it. Everybody’s talking now about buy less, choose more, make it last, cut down the collections, whatever.

“And I just say that of course there’s too much of it, but recycle is shit.

“You need reduce, reuse, recycle. But I don’t even believe in that too much. You have to do more than just recycle. It has to be quality.

“You have to change this year. Stop buying crap!” says Westwood, showing off a button badge with the words “I Love Crap.”

“The fashion world is full of this, they’re all doing it. But high fashion’s not the culprit, it’s the high street, everything’s sold at under cost and the whole capitalist system runs at under cost.

“Just to extract profit for a few people. And the Earth is being destroyed in the process.”

“So, we’re done?” she says. “Great. Thank you. Alessandro! Alessandro! Hello!” And just like that she was gone, lost to a sea of tartan jackets and upcycled jumpsuits.

QAnon conspiracy movement has ‘gained a toehold in Britain’