Babel: Around the World In 20 Languages
by Gaston Dorren
(Profile Books, £14.99)

IT SEEMED like far-flung whimsy when Douglas Adams created the Babel fish, a universal language translator, in The Hitchhiker's Guide to the Galaxy. 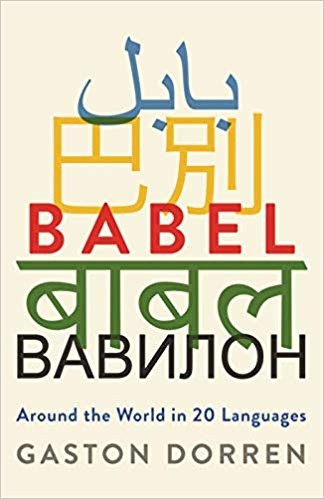 The idea is nonetheless revisited in Gaston Dorren’s whirlwind tour of mother tongues, in which the author suggests that the silicon translator being developed by Google could help bring English’s status as a lingua franca to an end.

It’s one of many fascinating facts and ideas detailed in his book, which explores the world’s 20 most widely spoken languages. Learn these, Dorren notes, and the speaker will be able to communicate with three-quarters of the world’s population. It’s a mind-boggling figure at a time where there are approximately 7,000 living languages.

Dorren doesn’t place a value judgement on the status of these languages — instead, he wonders at them at every turn. With one chapter dedicated to each of the 20 languages, the format always starts with a table containing, among other information, loan words and fun facts such as that Russian was the first language spoken in space.

Babel's real charm, however, is that each chapter has a different structure and takes the reader on a journey that intersects with factors such as nationalism, religion and gender politics.

The author looks at how language evolution can be triggered by politics, with Korean diverging in the north and south, how a new generation of empowered women is shaping language variants spoken in Japan and he questions who owns language when considering attempts by the French government to legislate its use.

The book requires some basic understanding of language, with the reader needing to be conversant with tenses and cases. Yet, aimed at the curious novice rather than the language expert, Dorren frequently provides examples and signposts web links for audio clips that might help to illustrate tricky areas of text.

And the format means that it’s possible to dip into individual chapters rather than reading them in order, although there is the occasional cross-referencing.

A paean to the sense of allegiance created by a shared language, Babel is enough to inspire the reader to make learning another language a firm resolution for the new year.