Protesters at the Hyde Park rally
×

THOUSANDS of people across the country demanded justice for George Floyd today at mass protests and local gatherings and on their doorsteps.

In central London, crowds of mostly young protesters gathered in Hyde Park holding signs saying “the UK is not innocent” and “white silence is violence.”

People sat on the ground surrounding speakers, chanting “no justice, no peace, no racist police” and “stop murdering us.”

Among the protesters was London-born actor John Boyega, who told crowds that protests were “vital.”

Mr Boyega also evoked the memory of Stephen Lawrence, the black British teenager who was murdered in a racially motivated attack in south-east London in 1993.

As well as demanding justice for the US, protesters held signs with the names of black men and women who have died at the hands of the police in Britain.

Better anti-racist education was also called for, with organiser Aba Amoah telling the Morning Star: “We are demanding changes to the national curriculum so children know about British colonialism and imperialism and our history.”

Ms Amoah added that the peaceful nature of the protest was “really important.”

Organisers also cited the case of Belly Mujinga, a railway worker who died with Covid-19 after being spat at by a man who said he was infected with the virus, as a reason for the protests.

Her family was among the thousands who descended on Victoria Station in central London with signs that called for justice. 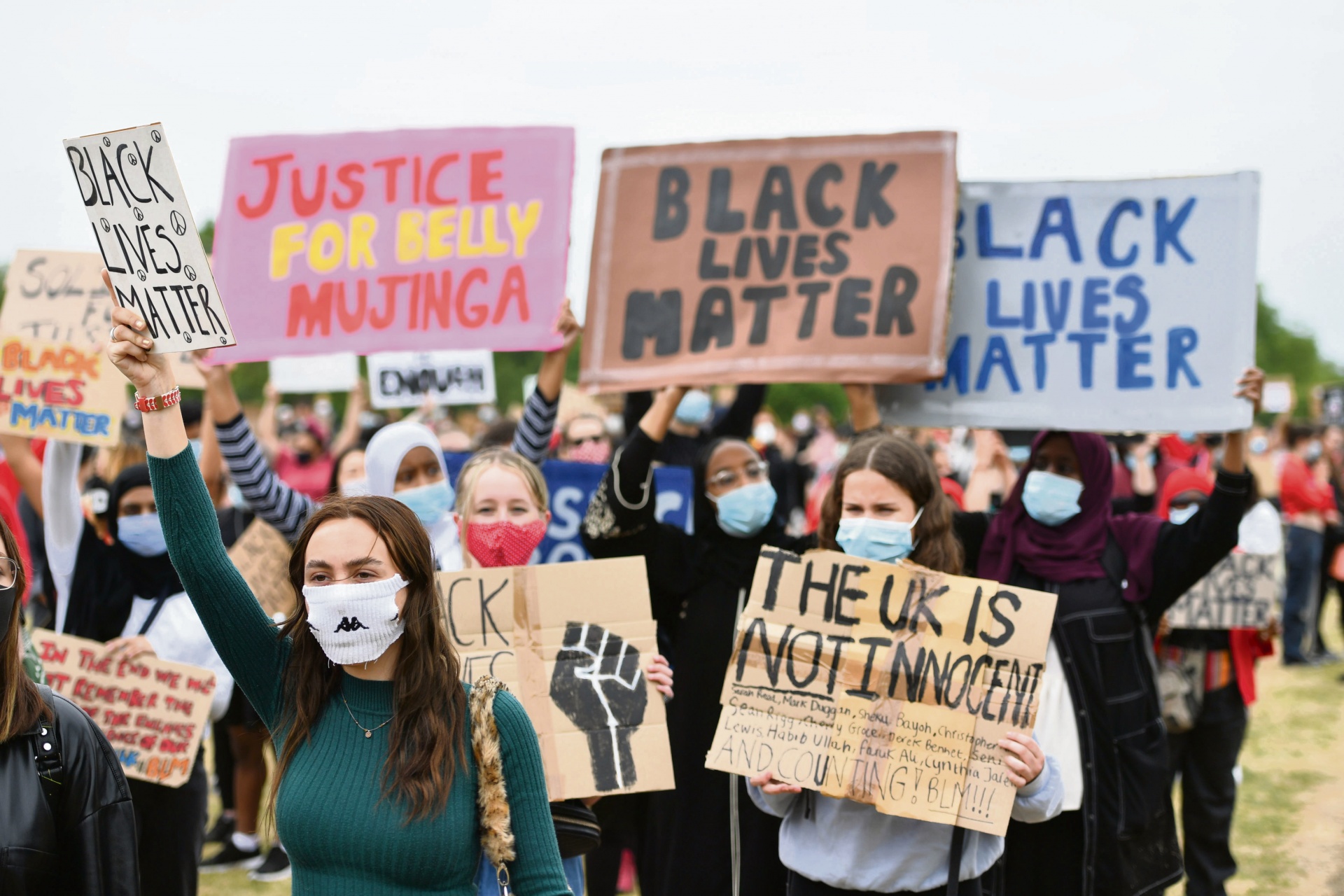 Another protester, Steph, felt the media was attempting to demonise the Black Lives Matter movement by capitalising on some of the violence seen during protests in the US.

Explaining why it was important for her to attend, she told the Star: “For me it is not just about black issues. It’s about other issues such as poverty and climate change, and these movements can bring together people of different races.

“I’m here because it’s not only a US issue — in Britain we have been facing racist problems since forever, for example Grenfell Tower.”

Another protester said: “I’m here because it’s important to support the movement, especially as I am white, I have never experienced discrimination and I want to show solidarity. Racism is a global issue.”

Stewards handed out hand sanitiser, masks and gloves and advised people to keep their distance from one another.

Local protests were organised by Stand Up To Racism (SUTR) across the country, with smaller attendances to allow people to ensure social distancing.

The campaign group said it wanted to show solidarity with the family of George Floyd, who was killed by Minneapolis police on May 25.

Mr Floyd’s death sparked widespread demonstrations across the US, which are now spreading across the world.

SUTR said it was also calling for a public inquiry into the impact of Covid-19 on black and ethnic minority (BAME) communities, with smaller protests taking place in Hackney, Lewisham, Leicester, Lancashire, Southampton, Portsmouth and Glasgow.

For people unable to attend, the group encouraged protesters to take a knee on their doorsteps and hold up signs reading “Black Lives Matter.”

SUTR said in a statement: “BAME communities are also disproportionately impacted by the rapid economic contraction as well as police brutality, which is not unique to the US as the recent tasering by police of Desmond Ziggy Mombeyarara in Greater Manchester shows.

“BAME communities are also 54 per cent more likely to be fined under coronavirus rules.”

The Leicester protest was supported by local MP Claudia Webbe.

“Here in Leicester and across the UK we must stand in solidarity with the family, friends and community of George Floyd in Minneapolis,” the MP for Leicester East said.

“Now is the time to work globally to end the severe class and racial inequalities which exist across the world.”