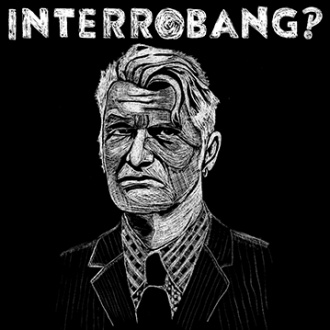 They're finally about to deliver their long-awaited debut album of 14 songs, lovingly nurtured live, that are classics of emotion, humour and politics. Mission well and truly accomplished.

Vocalist Dunstan Bruce, drummer Harry Hamer — formerly of anarcho-pop cabaret troupe Chumbawamba — and guitarist Stephen Griffin, ex-Regular Fries, came together in 2012 and their live performances since then have been accomplished exercises in sonic bruising.

Interrobang?! might still long for revolution, but they reject wholeheartedly the idea of nostalgia. This is all driving forward-motion filtered through a life of being engaged with great music and the influence of bands like Dr Feelgood, Fugazi, Wire, The Fall and The Jam is apparent.

Griffin's guitar and Hamer's drums create intense, majestically punchy pop and, on opening track Here Now, Bruce, passionate and with a bottled-up rage, shouts that he “still has something to say.” On Asking for a Friend, lyrically inspired by hitting the age of 50, he broaches all those difficult to talk about clichés of midlife male crisis, declaring: “I'll divulge I’ve been browsing middle-aged concerns … alcohol booze, erectile dysfunction, execrable news.”

It's a classic song, a brutally honest and humorous mirror to a society replete with fears, nightmares and existential anxieties.

Are You Ready, People? — the video of which uses a surreal constructivist picture poem photomontage design for the alphabet by Karel Teige as its call to arms — is a rejection of compromise and “ersatz rebellion” and a fierce restatement of Bruce's belief in revolution — “the meek will inherit shit … shit, shit, shit and that’s it!” sentiments echoed on Howard Beale tribute Mad as Hell.

Do You Remember is an affecting and moving piece about the death of his father while trying to comprehend their relationship and the joyous Love it All is a tribute to the remarkable Brighton legend Drako Zarhazar.

The propulsive Based On A True Story has Bruce considering his own mortality in contrast to the nauseous nightmare of his ICI-dominated new-town home evoked in Billingham. It both repels and attracts, concluding: “We're not so different, you and I.”

The nod to The Who in the opening track comes full circle with the rhetorical Am I Invisible Yet? — a perfect end to this terse agit-punk funkstorm.

Interrobang?! speaks to the lost punk generations dismayed by the erosion of their hopes and dreams but still desperate for something. This could well be their magnum opus and the beautiful line drawings of the band make the album a work of art as well a musical gem.

Interrobang?! are touring nationwide in April, with the album released on the 20th, details: interrobangband.co.uk