UNITY OF PURPOSE: The hunger strikers at Manor House
×

If you think Brexit is dramatic, you should be watching what is happening to the Kurds at the hands of the Turkish regime at the moment.

Turkey’s “political genocide” of the Kurds continues apace, with this week being a particularly busy week as Erdogan gets ready for the Turkish local elections at the end of March.

He has already said that, if the Peoples’ Democratic Party (HDP) win municipal elections, he will ignore the vote and instal his own cronies, but that has not stopped him continuing to jail HDP activists and Kurdish elected MPs.

This week it was Osman Baydemir and Leyla Birlik who were handed down jail terms for attending rallies opposing the Turkish state’s military attacks on the Sur district of Diyarbakir.

Over 2,000 HDP activists have been detained so far this year, with 71 elected mayors and co-mayors arrested since the Turkish state took over Kurdish municipalities by force.

Twelve HDP MPs have been handed down jail sentences with HDP former co-chair Selahattin Demirtas appearing again this week at his “show trial.”

Turkey have now threatened to invade the recently liberated Kurdish area of northern Syria known as Rojava, turning its back on any democratic road for the Kurds, and is pursuing a purely military solution to the Kurdish question, attempting to annihilate the Kurdish political movement.

Among this increasing repression and military threats there is a silent powerful voice coming out of the darkest dungeons of Turkey’s notorious torture centre — the Diyarbakir prison. Imprisoned Kurdish woman MP for Hakkari, Leyla Guven is now on her 37th day of hunger strike calling for a change of policy towards her people.

Her central demand is that the lawyers for the Kurdish leader, Abdullah Ocalan — imprisoned since February 1999 on the island prison of Imrali — be allowed access to their client who has been held in isolation for the last 20 years so peace negotiations can be started.

Guven’s sole resistance from prison has inspired many Kurdish people around the world to take action in solidarity with her call for peace with hunger strikes taking place in many countries all around the world. 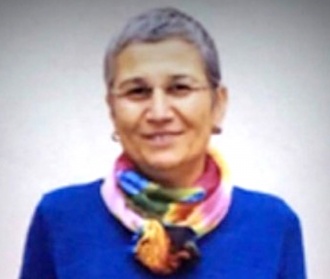 Women in Kurdish cities occupied by the Turkish regime have taken part in solidarity hunger strikes, but their actions have been brutally broken up by Turkish police. In Diyarbakir, Van and Batman, police attacked the hunger strikes and violently detained over 100 women taking part.

As Turkey slips further into total dictatorship it is important for voices such as Guven’s to be heard and amplified by friends outside the country and for solidarity to develop.

Her friends believe that she would not have started her hunger strike if she was not going to take it to the very end and many believe that she is now entering a “death fast” stage of her protest. Prison authorities have denied her the vital B1 vitamin that is critical for a hunger strike at this stage and there are real fears for her life.

Guven stated that one of the reasons for war and chaos “is the Kurdish question remains unsolved and ignored. I think that Mr Ocalan is making a great effort for the democratic and peaceful solution of the Kurdish question. Mr Ocalan’s solution proposals and ideas provide an important perspective not only for the Kurdish question, but also for the Middle East … I am willing to do something against this isolation regime [against Ocalan] which is crime against humanity. I know this is the demand of millions …

“I kiss the hands of all the mothers, Peace Mothers, Saturday Mothers. I am aware that the days of lasting peace that they struggled for will prevail in these lands. I am a comrade of those who love to die for the sake of life. With these feelings, I greet you all again with respect and wish you success in your work.”

The Kurdish community in London have launched a hunger strike in solidarity with Guven, echoing her central demand to stop the isolation of Ocalan — it has now entered its eighth day.

The Kurdish hunger strike is taking place outside Manor House Tube Station at Finsbury Park and there will be a solidarity rally at 6pm tonight Friday December 14.

You are invited to attend and show solidarity. There will be live music and Kurdish dancing.

Mark Campbell is national co-chair of the Kurdistan Solidarity Campaign.