Workers’ rights in globalised industry – how can we protect them?

Over the summer the Morning Star reported on a new study showing that major fashion brands were complicit in union-busting by Third World suppliers in the garment industry. Editor Ben Chacko spoke to IndustriALL general secretary VALTER SANCHES to find out what trade unions can do to tackle abuses stretching across international supply chains

THE Covid-19 crisis and the lockdowns imposed as a result hit the garment industry hard, causing order cancellations and job losses in producer countries.

What can trade unions do to press brands to shield suppliers from the risk of a sudden loss of income that they pass onto their workers?

“This problem emerged early in the pandemic. In April many brands endorsed a call to action, a tripartite initiative led by the International Labour Organisation (ILO) with a commitment by brands to pay for finished goods and goods in production.

“Brands that haven’t endorsed the call should be pressed to do so,” Sanches says.

“But one of the main issues for the sector is that it lacks a sectoral approach to industrial relations. Sector-wide collective bargaining is rare, which means hundreds of unions negotiating with thousands of employers.

“A rare exception is South Africa, where the textile and garment union (SACTWU) has a long tradition of nationwide collective bargaining and won a full pay guarantee by working out a deal with the employer body and the government. This was possible because of tripartite bargaining.” 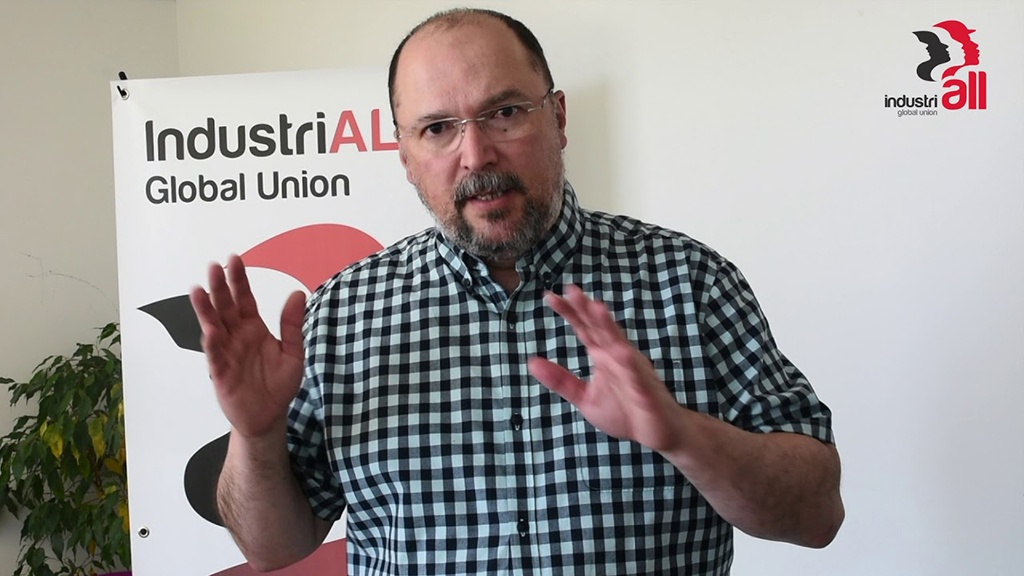 Sanches says IndustriALL has worked long-term with the ACT (Action, Collaboration, Transformation) initiative, which seeks to secure “agreement between global brands and retailers and trade unions to transform the garment, textile and footwear industry and achieve living wages for workers through collective bargaining.”

“We use the commitments brands have made through global framework agreements, the call to action, ACT and other initiatives to hold them accountable.

“When our affiliates in countries like Cambodia, Bangladesh and Myanmar raise issues, we bring the parties together in an attempt to find a resolution, with many cases solved.

“Our executive committee approved in June the need for a broader global campaign targeting the bad payers in the sector.

“We have the support from UNI Global Unions that will join us on that and we’ll certainly count on the  support from various NGOs.”

These approaches involve persuading brands to come on board. Yet Human Rights Watch says that “brand approaches to sourcing and purchasing are not merely a threat to a factory’s financial bottom line.

“They incentivise suppliers to engage in abusive labour practices … this means that brand practices in these areas directly undercut their own efforts to insist on rights-respecting working conditions across their supply chains” (because brands are always looking for faster, cheaper supplies).

Sanches agrees that “in general the requirement to maximise value for shareholders conflicts with commitments to corporate social responsibility. Companies are all bound by the same market forces, and this can reward bad actors with a competitive advantage.

“The buyer-supplier relationship is very complex. It also lets the manufacturers off the hook. While many are small manufacturers, there are others that are large multinationals, and sometimes they attack workers’ rights or try to break unions despite an explicit commitment from a brand to freedom of association.

“The complex and opaque supply chain is the bigger problem, as it allows bad actors to be hidden by obscurity.

“Reforming brands’ purchasing practices are an important part of the work, but the entire sector needs to be overhauled. This is what we are doing with the ACT initiative.

“For instance, ACT brands pledge to maintain a certain level of production in a country and not leave to seek cheaper factories to avoid a collectively bargained wage rise.”

But the report Union-Busting and Unfair Dismissals: Garment Workers during Covid-19 by the Business and Human Rights Resource Centre gathered evidence that trade union organisers and members were deliberately targeted in mass layoffs to break unions in many garment factories.

“There has been a definite increase in this behaviour from employers since the beginning of the pandemic. When we are notified by an affiliate about violations, we first demand that the owner of the supplier factory take immediate action to enter into negotiation with the affected trade union.

“If no remedy is achieved, we demand that brands sourcing from the supplier immediately take action with their supplier to ensure that workers’ rights are upheld.

“In many cases, we bring the parties together (local trade union, brands, and supplier) to the negotiation table to resolve the violation. For instance, our affiliate in Myanmar was recently able to win the reinstatement of workers through this approach.”

The report also suggests there is a big disparity between companies’ claims to respect labour rights and their record of ensuring these rights are respected, including with companies ignoring agreements they have signed with trade unions. Is this IndustriALL’s experience?

“Generally the commitment to respect labour rights is made by the brands, who require their suppliers to do the same. Again, the problem is supply chain complexity. Global brands try to keep costs down, and suppliers try to cut corners on wages and safety.

“But generally brands try to prevent this. However, they source huge quantities of clothing from producers, who often subcontract. Labour violations are frequent, but difficult for anyone to monitor because of the scale of the industry.

“The best system for monitoring labour violations is through independent trade unions, rather than relying on brands policing their suppliers. When our unions raise violations they are not able to solve on the ground, we bring them to the brands for resolution.”

The pandemic has also been used by governments to attack workers’ rights. The Communist Party of India (Marxist) says that a number of Indian states — Uttar Pradesh, Madhya Pradesh, Gujarat — have suspended labour law for periods of up to 1,000 days using Covid-19 as an excuse, saying that waiving employer responsibilities on pay, ventilation and other matters will encourage employment when mass unemployment is a risk.

“The suspension of labour laws is true and worrying. In India, both the central government as well as state governments can make laws on labour issues.

“We have reports of states increasing the threshold of workers for applicability of all labour laws. For example, the application of the Contract Labour Abolition and Regulation Act is now for establishments employing more than 50 workers (instead of 20 workers) in the States of Gujarat, Karnataka, Tripura and a couple more.

“The law on working hours has been changed in Gujarat, Uttar Pradesh and Tripura from eight to 12 hours.

“Some states such as Karnataka, Goa, Madhya Pradesh and Bihar have introduced fixed-term-employment. Under the Employment (Standing Orders) Act, a worker who had completed 240 days of continuous work (with a weekly day off) was deemed to be permanent. Now that there is FTE, workers have lost that.

“We have been supporting the joint struggle of the Indian national [trade union] centres in all their protests so far and we have written to the Indian government as well as the ILO protesting against the labour law changes.”

“Yes. It took pressure from ourselves and unions around the world, but Inditex made a commitment to not only honour orders made to supplier companies, but to guarantee an ongoing payment schedule and provide financing to keep companies afloat. That will give stability and predictability for suppliers in order to secure jobs and wages.

“Inditex also committed to ensuring that as factories reopen, they do so safely.

“But for us, the most important part of the agreement is that the company’s compliance will be monitored by a global union committee, representing the company’s workers from around the world, including at supplier factories.”

Sanches concludes that “the excesses of globalisation have led to a backlash in many countries. We’ve seen an increase in nationalism and a greater focus on domestic economies, and also in demands for popular sovereignty, as evidenced by the Brexit vote and other phenomena around the world.

“The best way to counter the excessive power of multinational companies over governments and multilateral organisations is through international union solidarity. The unions in the home countries of the multinationals, such as Britain, can play a special role.