MANY football hooligan books are little more than bragging that’d be better done with a tattoo, though there are some excellent exceptions. This is one of them. 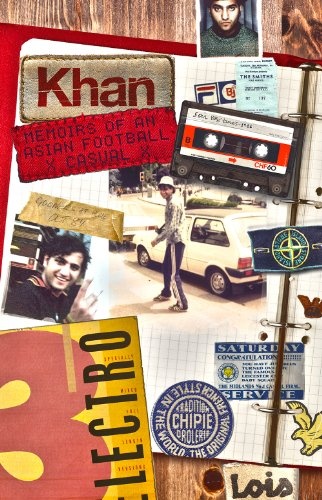 Leicester hooligan Riaz Khan isn’t what’s perceived to be your typical hooligan. He has a sense of humour and this account is bigger than himself. Many of his mates write chapters and the book is a portrait of the lifestyle of many working-class males in the 1980s, all the more of interest for its honesty and that the story it relates of young Asians is one neither the Football Lads Alliance nor Unite Against Fascism tells.

Khan is admittedly no fighter, but football violence was always more about standing and stand he definitely did. The music and fashion are captured in good detail — it was clothes that really defined the Casuals — and the 1980s style and lifestyle told here is authentic and not mythologised. We can leave that to the Daily Males.

Unsurprisingly, racism played a part in the 1980s and, in Khan’s life, this is discussed with several pertinent examples and it’s not as the middle class would have it writ. In school, it’s a skinhead girl who stands against racism. “The Casuals were radicals too,” Khan writes, “as we took every opportunity to go against the Establishment.

“We started to become more conscious of who we were and what we had become. Our crew started looking at the preaching of Martin Luther King, but we were more attracted to the rhetoric of Malcolm X because he believed in fighting the system.

“That’s exactly what we thought we were doing down at the football — though perhaps we were more like Citizen Smith, with his ‘Power to the People!’”

The book is about lads finding their place and that place is home, something we all help make.

Thursday 02nd Apr 2020
US blocks medical aid to Cuba in show of ‘wild west brutality’
Sunday 05th Apr 2020
Starmer's win is a defeat, but our movement is not beaten
Sunday 05th Apr 2020
ExCel centre's oligarch owners U-turn on plans to charge NHS millions for new field hospital
Saturday 04th Apr 2020
Cuba helped Britons aboard the MS Braemar in their hour of need – now we must help Cuba
Friday 27th Mar 2020
Nurse commits suicide in Italy due to trauma of working on frontline of coronavirus pandemic
Join the 501 Club

The ideals and the vision to deliver

Coronavirus should not be blamed for another crisis of the capitalist system, warns CP