Book Review Landmark strike in the struggle for equal pay

There's much to learn from a book on the victory of the Trico women in 1976, says BERNADETTE HYLAND

Trico: A Victory to Remember
by Sally Groves and Vernon Merritt
(Lawrence & Wishart, £25)

ON THE afternoon of May 24, 1976, 400 women walked out of the Trico factory in Brentford, west London, demanding their right to equal pay with their male colleagues for doing the same work. Supported by 150 men they won one of the most important, if now largely forgotten, equal pay campaigns. 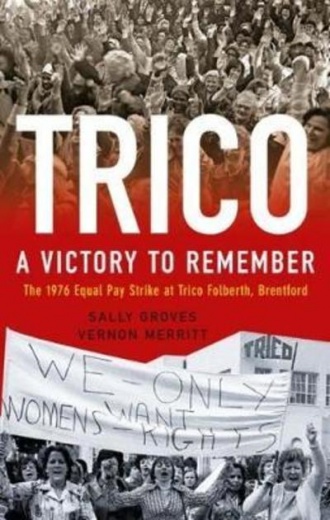 This new history of the landmark struggle, written by striker Sally Groves and supporter Vernon Merritt, demonstrates that they not only won equal pay, they also showed that the new Equal Pay Act was about decreasing pay levels rather than raising women’s pay and that a community-based strike, with strong trade union support, could defeat a US multinational company.

This was the 1970s, with a Labour government in power and trade unions still active in large manufacturing bases, with whole communities working in factories close to their home. Trico had a large female workforce working on the assembly line which was separate from the men. It was a workforce that was multiracial, including Irish, Afro Caribbean, Indian, Spanish, Maltese and French.

Trico, like many companies, was trying to keep its costs down and saw women as a good source of cheap labour — or so they thought. But the women had a trade union, the AUEW, that was prepared to back them over 21 weeks to ensure that they achieved victory.

Reading the story of the strike is a reminder of how organised and supportive the trade union movement was at that time. We casually use the words solidarity and community but the story of Trico shows the real meaning of the word. Trade unions up and down the country donated to the strike fund as well as organising the boycott of the company's goods. Locally, people supported the picket line and provided food and money.

The heroines were, of course, the working-class women who led the strike against all odds — and won. The book includes some fantastic photographs of the strike and, most importantly, tells their story.

As Bella (Davis) Young , one of the strikers, commented: “I knew I was in the right. No man could do the same job I do and get more money than me when I’m working hard.

Hopefully, this book will ensure that the Trico strike becomes as well known as Ford Dagenham or Grunwick in the struggle for equal pay and union rights.