Tory Heaven, or
Thunder on the Right
by Marghanita Laski
(Persephone Books, £13)

TORY Heaven was first published in 1948 and, as David Kynaston points out in the introduction, just like 2018, that year was a worrying time for the middle classes of this country. 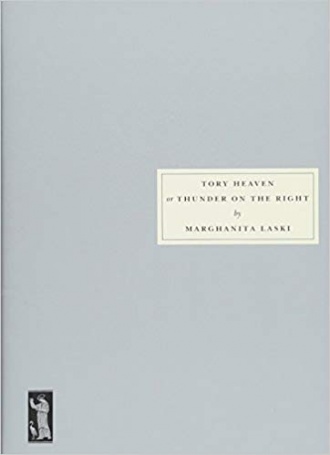 It's something that Marghanita Laski picks up on this insightful and comedic novel in which it is the Tories, not Labour, who win the general election in 1945 and proceed to recreate a class system with all the trappings of the 18th century.

The population are now graded into social classes from A to E, with the As paid in gold sovereigns and required to do nothing but live out the lives of the idle rich.

The middle classes are Bs, the Cs are servants from domestics to hairdressers and trade unionists, who cannot now strike are Ds. The Es include the despised intellectuals.

Central to the story is James Leigh-Smith , an English gentleman with a privileged education but with no particular skills, who has an innate belief in his superiority due to his birth and upbringing.
Leigh-Smith is pleasantly surprised to find that that he is in class A.

Enjoyable as this is for him, when he goes to visit his parents, he finds out that they have been changed by the social cohesion born out of the second world war and are not happy with the new system that forces them to rigidly abide by the rules of their class or face being degraded.

The Leigh-Smiths now have to live up to their A classification. They have to eat lots of dull and badly cooked food, as well having their choice of marriage partner dictated by the government.

Leigh-Smith's friend, Ughtred, finally breaks with the system over press censorship and it is James who helps him escape the country — ironically, to a free Ireland.

Laski shows in the novel that attitudes to class did shift during the second world war but that the possibility of an authoritarian government was still there.

Tory Heaven may be of its era, although watching Jacob Rees Mogg on television one can see that he would make an excellent A. Funny and ironic, it's a book that says a lot about the British class system, then and now.