The LLL demo in Berlin invokes the spectre of communism

Luxemburg and Liebknecht saw their revolution crushed by reaction, while Lenin’s survived and went on to defeat their fascist killers. 100 years later, thousands march to celebrate the lives and ideology of all three — communism. VICTOR GROSSMAN reports from Berlin

RED FLAGS everywhere, thousands marched along through the drizzly weather and puddled streets. Many bent figures hobbled with canes, some were in wheelchairs next to a younger set sitting proudly on their fathers’ shoulders or in strollers. Then another big group of young people arrived, some singing or chanting leftist demands.

Most spoke German but many Turkish, English and a dozen other languages mixed in. They all moved past the rows of political stalls and snack booths, a majority had red carnations for the ring of graves and, in a brick semicircle, urns with names which once resounded well beyond Germany from 1900 to 1990.

One section is for those who fought and died in Spain. But the masses of red flowers for Karl Liebknecht and, even more for Rosa Luxemburg, was higher than I have ever seen them.  Both were murdered 100 years ago.

Why do those two names mean so much to so many people? This year 20,000 were estimated in attendance, but who could count the individuals and the waves of groups during the whole of Sunday?

It was far more than last year, when 10,000 were estimated. I have watched the numbers increase and decline over the years, sometimes in official GDR parades, sometimes, afterwards, faced by mounted police, dogs, helicopters, and in one year banned (but defied).

There were fewer in recent years as faithful GDR old-timers died out. This year’s increase was due in part to the 100th anniversary — but not only that.

These commemorations began soon after the deaths of Liebknecht and Luxemburg, and were only stopped fully by the nazis, who destroyed the monument by the great Mies von der Rohe and destroyed the bodies, or what was left of Luxemburg after months in the canal into which the killers threw her corpse. 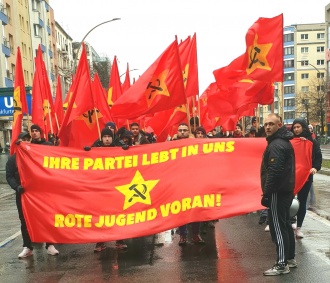 Thus the graves are empty, but this cannot lessen the unending admiration and love for Liebknecht, a great, courageous fighter and, undeniably even a little more, for Luxemburg, a delicate, sensitive woman, limping since childhood, a lover of poetry and the smallest aspects of nature: a tiny bird, a beetle attacked by ants, a nightingale, but then, with her clear, sharp mind, superior to so many of the loud men she was surrounded by, capable of fiery speeches which moved so many audiences and were feared by so many enemies.

What they yearned and fought for — and aroused such love and hatred  — was first the war’s end and then a socialist Germany and a socialist world, with wars forever banned. Much of this seemed within reach in November 1918, when navy sailors refused to sail their ships into a final, fatal encounter with the British fleet.

Arrested and locked up in the port in Kiel, they were supported and freed by the shipyard workers, and the soldiers sent to subdue them turned their guns around, forcing an end to World War I, deposing the Kaiser, and setting off Germany’s November Revolution.

The rebellious sailors moved to Berlin, hundreds of thousands of workers joined in, and Liebknecht announced a new Socialist Republic of Germany from the Kaiser’s deserted palace.

But hardly a mile away another state was also created — what came to be known as the Weimar Republic because that is where its constitution was approved.

Its president was Friedrich Ebert, the head of the Social Democratic Party, which supported the Kaiser’s war from start to finish. Liebknecht was in 1914 the only Social Democrat to reject the war, or spending one mark for it.

His continuing opposition, and that of Luxemburg, who also insisted that working people should never massacre each other, meant imprisonment for both till they were freed by the revolution. 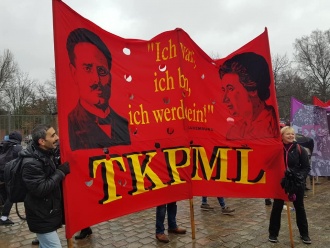 Events moved fast. Too fast. In secret Ebert and his group joined with the defeated generals to end the monarchy but keep the rule of the wealthy, saving it from the wrath of a hungry country, which demonstrated — half million in Berlin — but soon yearned for peace, any peace.

Ebert called on his minister of war Gustav Noske, also a Social Democrat, to crush the rebellion. “Someone must be the bloodhound!” he said, and sent in a well-armed mix of aristocrats and thugs to smash the resistance. Liebknecht and Luxemburg, in hiding, who had helped found the Communist Party two weeks earlier, were soon found and killed in the same night. Decades later the responsible officer, never punished, revealed his contact with the government.

The new government soon became a site of compromise and betrayal. When the frightful depression hit, when large numbers of Social Democrats moved towards action and, more alarmingly, millions voted for the Communists, all democratic remains were brushed aside by those same forces — Krupp, Thyssen, Flick, Deutsche Bank and the others — which again turned to the bloodthirsty thugs of Hitler. The result: over 50 million dead and much of Europe in ruins.

Luxemburg and Liebknecht are admired and loved as revolutionaries. There was also a revolutionary spirit at the annual conference, always arranged for the Saturday by the newspaper Junge Welt; the 2,000-seat auditorium was jammed, listening to forceful speeches by foreign guests and again a taped message from the imprisoned black journalist Mumia Abu-Jamal, now with just a ray of hope for release.

With the waves of red flags on Sunday, often with a hammer and sickle, visitors from another planet might have thought a new revolution was imminent! 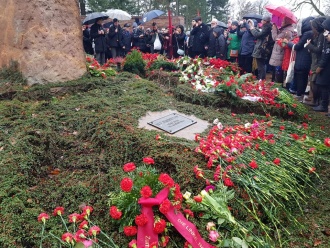 They would have been mistaken. No socialist revolution is imminent, violent or non-violent, now or in the near future. A large proportion of working people are indeed dissatisfied, often angry, even many Germans. But few are considering any such revolution. The time is not ripe.

As in 1914 and 1919, Germany’s Social Democratic Party is still compromising the principles it stood for when Liebknecht and Luxemburg were in it. Now it is part of a government with Angela Merkel’s rightist Christian Democrats, to which it bends, over and over, to the pressures of the mighty, to crooks like the environmental chisellers Volkswagen, BMW, Daimler, pitifully proclaiming its love for a working-class membership now deserting it, leaving it a fragment of its former size at an anaemic 15 per cent.

This has happened to many European parties called socialist, while parties to the left, often split and disorganised, have rarely found the fighting spirit and strength to adequately face two dark clouds now adding to CO2 and other poisons wrecking the Earth from pole to pole.

One is the return in growing strength of the same species of well-financed thugs who killed Luxemburg and Liebknecht. The other is manoeuvring with ever more modern weapons along the borders of any country standing in its goal of total world hegemony.

It is controlled by a small, mighty billionaire clique — in pharmaceutics, chemicals, car-making, agriculture, retail sales and mind control, but above all in making disastrous weapons of war, which now threaten atomic annihilation far swifter than ecological destruction.

Regardless of how wild the fervour of some or the realistic planning of others, the fact that hundreds wore yellow vests on Sunday provided hope. People in France, have gone into the streets, week on week. Angry demonstrations surprised the world in Vienna, Budapest, in the Nile cities of Sudan and in Zimbabwe. Eager, combative faces are upsetting old guards in the US Capitol, and teachers in red vests have taken a stand in West Virginia, Oklahoma, Chicago and Los Angeles. 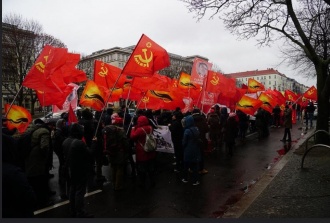 who don’t move “not feeling their chains” have been used thousands of times — and also misused. Less often quoted is her warning to the world about the capitalist system: “Bourgeois society stands at the crossroads, either transition to socialism or regression into barbarism.”

Many of those taking part on Sunday also knew of Liebknecht’s last article, printed after his death: “Those defeated today will be the victors tomorrow … whether or not we live to experience it, our programme will remain alive; it will prevail in a world of a rescued humanity — in spite of everything!”

Burundi thanksgiving held for election result despite allegations of fraud