Book Review Much to gain from A World to Win

A new book on Marx draws some tendentious conclusions, but it's an invaluable addition to the literature on the great man, says CARLOS MARTINEZ

A World to Win: The Life and Works of Karl Marx
by Sven-Eric Liedman
(Verso, £28)

SVEN-ERIC LIEDMAN’S new biography of Karl Marx aims to provide the reader with a nuanced and detailed account of the intellectual giant’s life and thought. 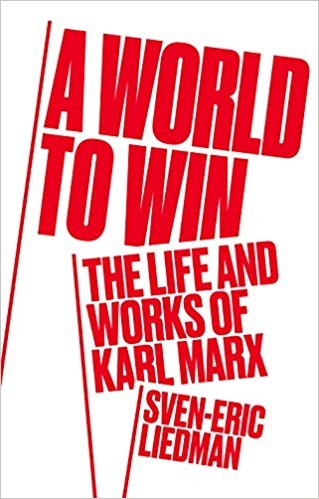 Beyond the biographical outline and the coverage of the best-known aspects of Marx’s work in Capital and The Communist Manifesto, Liedman also gives a fairly detailed description of Marx’s explorations in philosophy and the trajectory of his theoretical ideas.

This, along with an examination of the intellectual relationship between Marx and Engels and an interesting analysis of the fate of Marxist thought in the decades after his death, mean that Liedman’s book can justify a place in the crowded shelf devoted to the study of Marx.

The author is nothing if not erudite and his meticulous coverage of Marx’s changing opinions on philosophy is interesting and important, although it makes for slow and difficult reading for anyone not well-versed in the subtleties of Hegelian logic — this reviewer included.

For the newer reader, A World to Win usefully explains many of the key ideas and phrases of Marxism such as the dictatorship of the proletariat, the transformation of quantity into quality and commodity fetishism and it describes the evolution of these ideas over the course of Marx’s life.

The book's greatest achievement lies in its compelling demonstration of the continued relevance of Marx’s critique of capitalism. In a post-Soviet era, where capitalist liberalism is supposed to have triumphed once and for all and where bourgeois economists and politicians routinely label Marxism as obscure and antiquated, Liedman is able to show that the contradictions of capitalism identified by Marx are as present as ever.

The working class — those who rely on selling their labour power in order to survive — continues to grow, exploitation and poverty are rampant and crises are acute. Marx didn’t prescribe the dimensions of a new society, but he concluded that the liberation of humanity would come through the liberation of the working class. Liedman demonstrates that this conclusion is still valid.

Another key point that he emphasises is that Marx didn’t really set out to build “Marxism.” He delved into numerous areas of knowledge and developed several important theses, but he “never arrived at any summation of his work, much less any system.” The -ism was added to Marx by followers after his death. This insight is helpful as a warning against dogma and as a reminder that Marx’s work was not complete and that socialism is not a closed book but a living science in need of constant development.

Yet Liedman’s objections to “system-building” come across as being rooted in a rather stuffy academic perspective that has limited interest in the practical, real-world application of Marx’s analysis.

After Engels and Kautsky, Lenin is the chief culprit in terms of turning Marx into Marxism and elaborating a clear ideological system. Was he wrong to do so? Lenin’s Marxism incorporated Marx’s most important formulations and synthesised and simplified them such that they could form a firm ideological basis for a mass political party capable of establishing working-class power and building a new social order.

Lenin — and other great Marxists after him — took Marx’s ideas and method and leveraged them towards a programme of political action. The alternative was humble acceptance of a vicious imperialist status quo.

Consistent with his disdain for systematising Marx, Liedman has no time at all for the socialist experiments in the Soviet Union, China or Cuba — Vietnam, Laos, Korea, Grenada and elsewhere don’t get a mention.

The USSR from the 1920s onwards “had no connection with Karl Marx,” he contends, while Cuba showed some early promise but “gradually became more and more like other Soviet-supported regimes, with food shortages and political dissidents in prison.” There are no words about the island's extraordinary social welfare, highly educated people or inspiringly selfless internationalism.

Marx analysed the two-month Paris Commune in great detail, drawing lessons from it that he incorporated into his overall political understanding. Would he really have dismissed workers’ states that had to make compromises in order to defend themselves from old ruling classes and relentless external pressure?

Modern China is dismissed by the author as “the most expansive capitalist economy of the 21st century,” a “more than 60-year dictatorship” with a “neoliberal economic policy.” For Marx, apparently, “it would have been inconceivable that a country that quotes him would drive capitalism to its utmost extremes.”

It’s generally best not to project one’s opinions onto the deceased Marx, but it’s not so difficult to imagine him being cheered and astounded by the emergence of China — a country that during his lifetime endured the most awful poverty and colonial humiliation — as an advanced industrial power at the cutting edge of science and technology, with an enormous working class and a standard of living approaching that of Western Europe.

Defects notwithstanding, Liedman’s book is a thorough, well-researched and valuable contribution to the literature on Marx’s thought. It will surely inspire readers to go direct to the source and study Marx for themselves.