The Murder of Rosa Luxemburg
by Klaus Gietinger
(Verso £14.99)

NEXT Tuesday marks the centenary of the murder in Berlin of two giants of international socialism, Rosa Luxemburg and Karl Liebknecht and this book is the result of screenwriter and film director Klaus Gietinger spending years sifting the facts from the lies that have surrounded not only their deaths but the trials of their killers. 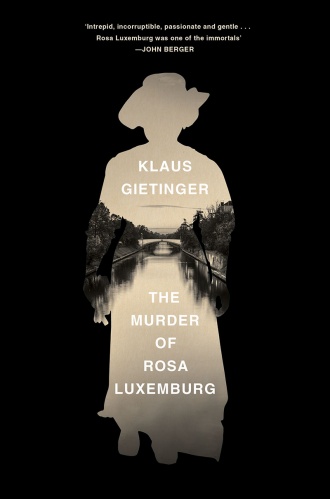 The situation in which Germany found itself in 1918 was both tumultuous and precarious. Defeated and humiliated in WWI, the country was faced with famine and confronted by spontaneous naval mutinies in Kiel and other ports.

Revolutionary councils of sailors, soldiers and workers were formed across the country. The abdication of the Kaiser led to the formation of a government of the Social Democratic Party with Friedrich Ebert at its head.

When Ebert sacked the radical police chief of Berlin, a mass demonstration was called in protest and in the ensuing general strike hundreds of thousands of mostly armed workers seized railway stations and newspaper and telegraph offices.

Intent on crushing the wave of revolutionary protest and also protecting the existence of his government, Ebert recruited well-armed and well-trained monarchist police from the Freikorps to suppress the uprisings and hunt down their leaders.

Luxemburg and Liebknecht, who had been politically active during the war within the Spartacus League and who had helped form the Communist Party of Germany on January 1 1919, now found themselves in hiding, then captured and murdered by a heavily armed division of the Freikorps led by Waldemar Pabst.

Gietinger’s aim is not only to find out who in the SDP arranged their murder and who committed the deed but to reveal the circumstances of their death and the cover-up that led to the farcical trials of the men involved.

The author describes the trial for Luxemburg’s murder “one of the most laughable travesties of justice in German legal history.”

Pabst lived on until 1970. After a chequered career with the nazis, he worked in weapons-dealing and published a far-right magazine.

In that publication in 1961 he admitted he had given the orders to kill, calling it “a decision to eliminate the two pernicious and docile pupils of Moscow.”

The Federal German government issued a decree, never repealed, calling it a legitimate execution and the SDP has continued to uphold the discredited verdicts of the 1919 murder trials.

Pabst’s admission interested Giesinger enough to decide to write a TV film on Luxemburg’s death and he discovered the existence of Pabst’s collected papers which, although classified, somehow landed on his desk.

As a screenwriter for a TV cop show, Giesinger knew how to sift information, follow leads and double-check data and so was able to uncover the truth about the double murder. He tells a gripping if unsavoury tale of collusion, duplicity and mendacity.

The actions of the SDP government in suppressing the workers’ uprisings and the killings of Luxemburg and Liebknecht led to a rift between communists and social democrats that could not be healed and led to the collapse of the Weimar Republic and the rise of nazism.

As Gietinger says: “What the leaders of the SDP failed to grasp on sinking Luxemburg’s body in the Landwehr Canal, they were sinking the Weimar Republic along with it.”

Jos Buttler: ‘We stand against any form of discrimination’

‘At odds with open justice’: Supporters of ‘Kill the Bill’ defendant denied access to court room