THERE are occasions when a novel deserves the sobriquet mould-breaking and one such is the publication of this tale of an African-American hobo by Wayne Holloway, which switches back and forth between a present-day film script and a dystopian future reality. 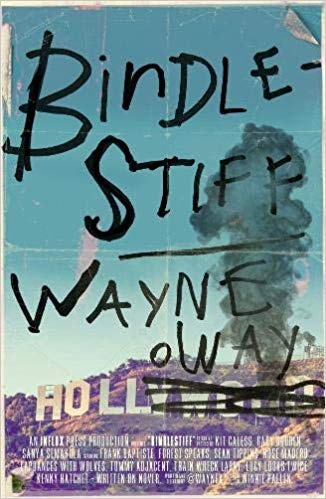 Bindlestiff – another term for a travelling itinerant – starts in the harsh factory of Hollywood as a script writer and director try to secure the money and the team to make a film about a “black Charlie Chaplin.”

But soon, the reader is shoved down a rabbit hole of a dysfunctional immediate future with the narrative following military veteran Frank Dubois as he travels across the mid-west of the US in 2036 to see his children after a decade-long absence.He works his passage by mending items that others, brought up in a throwaway culture, have no idea how to mend.

Each episode is prefaced by a short film script before the narrative turns to a seemingly conventional third person format allowing more of Dubois’s interior life and past history to be examined — literature allows more of the truth to be revealed than do films.

But the protagonist inhabits a world that is far from conventional. The US capitalist class has collapsed, the federal state authorities have been reduced to holding onto the coastal areas and a new lawlessness has opened up in the heart of the country.

Alongside the many bindlestiffs who criss-cross the continent’s extant railways are their pursuers, The Freight Train Riders of America, who are committed to murdering as many hobos as possible – but not everyone is suffering equally.

The withdrawal of centralised capital and its law-enforcement arm has allowed Native American tribes to reassert themselves both economically and politically. But even here — as the testimony of “Lapdances with Wolves” shows — there remains poverty and addiction.

This is a novel where collective and individual relationships have been sundered and are being rebuilt and patched together and as such the fiction is a clever combination of themes explored by John Steinbeck and Ridley Scott.

Exploitation remains the underlying principle of this society, as it does the present one, and the various scripts reveal the treachery of the US film industry as the original creative team are pushed aside and, shockingly given its current relevance, the role of Frank is rewritten for a white actor.

In adeptly handling such a variety of themes across a number of genres, Holloway has announced himself to be a highly creative and inventive new voice in literature.

Forces close in on Seversk after Russia takes control of Lysychansk