We must step up our campaigning in defence of refugees and against right-wing scapegoating, writes JEREMY CORBYN

THE global and ongoing refugee crisis has been back in the headlines in recent weeks, because of tragic scenes of the fire in a refugee camp in Moria, Lesbos.

But refugees have also been the focus of more media attention here because of a wave of hostility encouraged by the Tories and their allies.

The scapegoating of refugees has reached fever-pitch in recent weeks as the Tories employ their age-old divide-and-rule tactics, seeking to deflect attention from their disastrous and deadly handling of the coronavirus pandemic.

Tory MP after Tory MP took to the airwaves to argue for deploying military vessels to deter people crossing the channel, rather than taking the responsible approach in line with international law to provide safe and legal routes to people seeking to claim asylum.

The Tories’ reactionary and divisive approach is, of course, straight out of the Trump playbook.

And in Europe, right-wing governments in Hungary and Poland have joined in, also proclaiming they will not accept any asylum-seekers, in keeping with the rise of the xenophobic right across much of the globe.

What all these right-wing governments — and much of the media as well — fail to mention is that refugees have a legal right to claim asylum here, and our government has international obligations in this regard.

And I would argue we also have a moral and humanitarian duty to give people the right to claim asylum.

The heartbreaking scenes earlier this month after the fire in Moria, Lesbos, were just a small glimpse into the desperate lives many refugees in these camps are living. 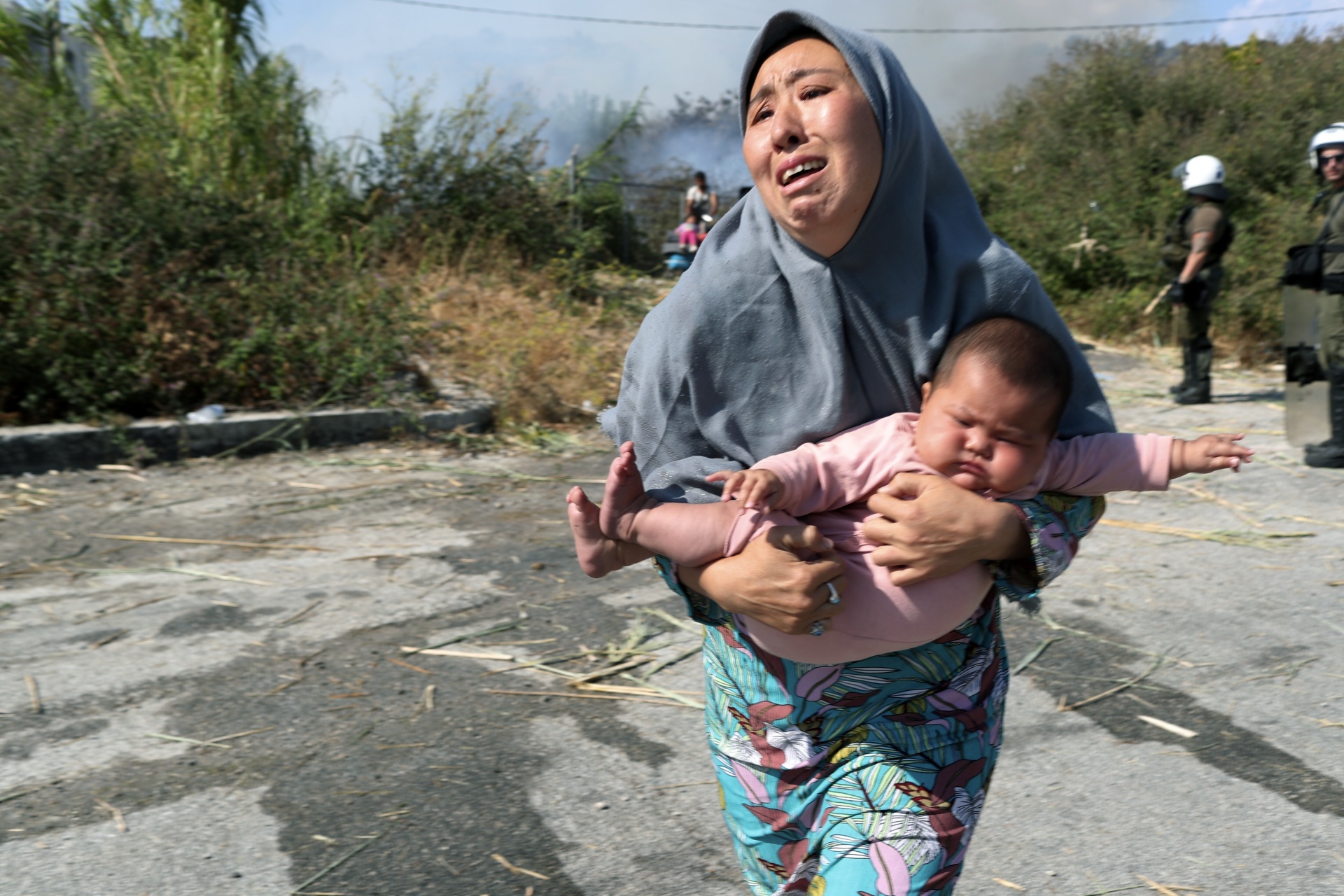 A refugee holds her baby as she runs to avoid a small fire in a field near Mytilene town, on the northeastern island of Lesbos, Greece

Our solidarity is with all those gravely affected by the fire, among them are 400 unaccompanied children who face a horrendous situation.

As Lord Alf Dubbs has said again and again, it’s time for the British government to meet our obligations to these child refugees and those in Calais and elsewhere.

These conditions are faced by refugees here in Europe, but there are also over 65 million refugees around the world who are too often forgotten.

For this reason, this week in Parliament, I will be leading a debate on the plight facing the Rohingya refugees. Their plight does not get the attention they deserve, even though there are over one million in Bangladesh today.

In these refugee camps, over 25 per cent of Rohingya children are malnourished.

Over 12 per cent are suffering from severe stunting, a condition resulting from starvation and malnutrition.

Babies under six months are among the most vulnerable and have malnutrition rates near 50 per cent.

This is a massive humanitarian crisis and the international community simply must do more.

And we must never forget the Palestinian refugees who were located in camps in Lebanon, Jordan and Gaza in 1948.

Now they house the great-grandchildren of the first arrivals, with still no prospect of returning home, and meanwhile Donald Trump is cutting vital funding to the United Nations Relief and Works Agency for Palestine Refugees in the Middle East (UNRWA), which does so much work to give them basic support and services.

The climate emergency, unless averted by urgent international governmental co-operation on a massive scale, will mean further crises, leading to more and more climate refugees.

In Brazil, for example, if the far-right Bolsonaro regime continues its approach of encouraging agribusiness in Amazon deforestation, we can expect the Amazon fires to reach higher and higher levels, meaning that increasing numbers of people will have to leave their homes.

In this sense, solutions to climate chaos based around local, regional, national and international green new deals are as important here as they are in other regions.

We should also acknowledge that Britain’s support for numerous US-led wars and military interventions in the Middle East and elsewhere has contributed to many people having to flee their homes and countries.

Furthermore, arms sales fuel even more conflicts and wars; British arms sales to places like Saudi Arabia are set to resume even though they are used in the disastrous war on Yemen, which is now one of the worst humanitarian disasters on the planet.

Standing with refugees, saying they are welcome here and that refugees’ lives matter must therefore be central to our internationalist approach to the world.

Jeremy Corbyn former leader of the Labour Party and is MP for Islington North.