Diane Abbott was quite right to call out the commodification of sexuality that’s being encouraged at British universities, says ANNA FISHER

Abbott, who has the distinction of being both Britain first black female MP and the MP who has suffered the most abuse on social media, quite rightly described this as “horrific.” 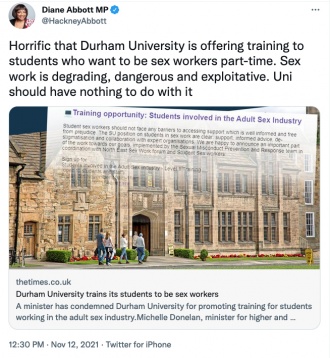 Her detractors were soon out in hordes insisting that “sex work” just needs to be made safe and she is simply not progressive enough to understand.

Happily there were also many people, including sex trade survivors, tweeting support.

Abbott’s tweet and the linked article did not explain an even more disturbing fact.

The training is not unique to Durham. The two presenters are part of a team at the University of Leicester who’ve received Economic and Social Research Council funding for a two-year project to promote their “student sex work” policy and toolkits to universities all around Britain.

They have not only delivered this training to students and staff at Durham, but also to hundreds more at dozens of other universities.

The training is part of a systematic attempt to bypass proper public debate and get universities in Britain on board with a very partisan approach.

Durham University was quoted in The Independent as saying the training was designed to “ensure students can be safe and make informed choices.”

But is it possible to “ensure” anyone is “safe” when they’re involved in an occupation with the top murder rate, PTSD at rates higher than soldiers returning from a war zone, and brain injury rates surpassing even that of boxers?

The sex industry is inherently dangerous. Nothing can eliminate the risks or bring them into line with those involved in a normal job.

If you don’t believe me, think of your dentist and the PPE she wears to simply look in your mouth.

One of the training slides lists a number of so-called myths, including that “sex work is not ‘real’ work.”

To dismiss this, the trainer reads out the dictionary definition of work. “Sex work” involves the exchange of services in return for money, therefore, she said, it is “real work.” QED.

Except, I don’t know about you, but I would have expected something a bit more cogent. Something that would actually equip a student to make an informed choice.

Perhaps, for example, a discussion of the fact that the core feature of prostitution is a male client penetrating one or more of the student’s orifices.

Far from providing a “service,” she is in fact being paid to endure the client doing something to her that she wouldn’t tolerate under any other circumstances.

You don’t need to be a professor to recognise that this is fundamentally different from any other kind of work — where you’re the one doing the task.

Another slide shows the various kinds of “sex work” that students are involved in. It illustrates another problem with the “sex work” terminology — it covers a wide range of activities, from selling soiled underwear to “full service” prostitution. 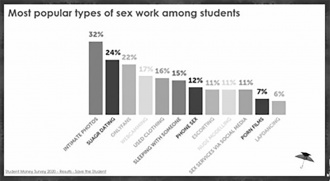 While these activities come with different risks, they all involve prioritising the sexual desires of the client and subsuming those of the student.

They all commodify sexuality. Sexuality, which is a core part of our humanity, our personhood. My sexuality is not separate from myself. You cannot separate yours from yourself — any more than you can separate yourself from your body. This is yet more evidence that it is a category error to insist that “sex work” is “normal” work.

About 80 per cent of those engaged in the sex industry are female and clients are almost always male — meaning that the sex industry overwhelmingly commodifies female sexuality for the benefit of men.

You do not need to be a professor to see that, given the scale of the industry, this will affect the general relations between the sexes.

It feeds men’s sense of entitlement and superiority — the very attitudes that are known to underpin male violence and sexual misconduct.

Leicester’s policy, toolkits and training do not discuss this at all. Not even for one millisecond. They admitted in their responses to FOI requests that they didn’t consider the impact of their approach on anyone other than students already involved in the sex industry.

They didn’t consider that presenting the sex industry as equivalent to retail or the food industry would implicitly condone it and might lead to vulnerable students being drawn into the industry and harmed and disadvantaged by that experience.

Nor did they consider that it might lead to young men starting or stepping up a career as sex industry consumers. After all, if selling sex is not significantly different from flipping burgers, buying sex must be much like buying a hamburger too, right?

And they didn’t consider how this might impact the wider community and general relationships between men and women. At a time when sexual misconduct is at an all-time high on university campuses, frankly, this is unforgiveable.

The training is conducted in two sessions. Someone, let’s call him Jim, who has attended both training sessions at an English university, told me that sex buyers were not mentioned at all in either of the sessions — apart from during a biased explanation of the Nordic model.

First introduced in Sweden, the Nordic model decriminalises selling sex and provides those involved with alternatives and viable routes out, while making buying sex a criminal offence.

It is founded on the understanding that nothing can make prostitution safe and that it is a barrier to sex equality. The aims are to reduce the size of the industry and to change men’s attitudes and behaviours.

Quite how making someone a criminal increases their power was not explained.

Jim astutely observed that this and the fact that there was no mention that sex buyers are the main cause of harm, makes him wonder whether the Leicester team has fallen under the spell of the big pimps and pornographers — the misogyny-industrial complex.

You may wonder where this will end. If authorities now accept students engaging in prostitution to fund their studies, how long will it be before single mothers and disabled people will be denied universal credit unless they put in hours down the brothel?

This is why grassroots feminists are fighting back. Nordic Model Now! has released a handbook for universities that sets out an alternative approach.

It provides a realistic understanding of the sex industry in sometimes harrowing detail, the short- and long-term impact of involvement within it, and detailed advice about how best to support students who are caught up in it.

Recommendations include that no student should have to resort to the sex industry because of a lack of other options, and any policy around the sex industry must be an integral part of the wider response to combatting sexism and sexual misconduct in the university community.

The handbook is available as a free PDF and you can buy printed copies from nordicmodelnow.org. The handbook will be launched at a free webinar on Sunday November 21. NMN has also set up a petition to call on Leicester to revoke their toolkit.

If you are a student, parent of a student, or work in a university, do consider promoting the handbook. You may want to get a copy and show it to the student welfare or equality, diversity and inclusion departments — or at least recommend that they download and read the PDF.

Anna Fisher is the chair of Nordic Model Now! (nordicmodelnow.org).