Men's Boxing This Boxing Game: A Journey in Beautiful Brutality

NOBODY asked or invited me to spar at the Outlaw Gym in Hollywood, but then nobody had to. You just felt it, the obligation to step through the ropes and uphold that exalted tradition within the culture of the sport known as “paying your dues.”

It was a dynamic, an irresistible pull, prompting me to ask Freddie Roach one morning as I was leaving the gym if I could spar sometime.

I asked the question while every particle of logic I possessed was screaming at me not to. Logic, though, had nothing to do with this.

Without missing a beat Freddie called out to a guy who was working one of the heavy bags: “Hey, Herb, you wanna work tomorrow?”

“Okay J, Herb here’s gonna work with ya.” Herb and I exchanged a nod. “Be here tomorrow at 10.30,” Freddie continued matter-of-factly.

That settled, I said my goodbyes and stepped out into the stifling heat of a typical LA afternoon.

Herb, I should explain, was a guy around my age who trained every day and had the physique of your average Mr Universe contender: muscular without a trace of body fat.

He ran half-marathons on a regular basis and though he didn’t fight competitively, he sparred regularly and knew his way around a boxing ring. I was doomed, there was no use trying to sugar-coat it, destined tomorrow to be the victim of a public execution.

I could think of nothing else as I took my usual walk back to the apartment along a busy Hollywood Boulevard, dodging in and out of the usual gaggle of tourists feasting on the Walk of Fame and other attractions while street performers were doing their utmost to part them from their money.

And that’s not counting the assorted other waifs and strays who also filled a boulevard that was the acme of vulgarity and desperation.

The only experience I’d had in the ring before then had come at a boxing booth in Brussels six months previously. The crucial difference between then and now however was that back then the experience had come about as a result of a decision made on the spur of the moment, leaving little time to think about what I was doing prior to climbing between the ropes.

This time I had an entire day to think about it and consequently dread gripped my insides like a giant pair of gnarled hands, even as I force-visualised myself in the ring with Herb jabbing, hooking and moving with studied precision, peppering him with punches as I’d seen the pros do at the gym when they sparred. 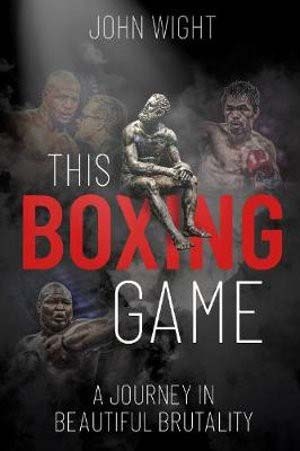 But no matter how hard I tried to conjure a positive outcome, the vision kept reverting to me being punched around the ring at will, struggling to survive a relentless assault from a fitter, stronger and far more skilled opponent.

Even worse than the thought of the physical punishment likely to come my way was the prospect of being humiliated. The ancient Romans called it dignitas, the primacy of dignity if a man is to enjoy an honourable and worthwhile existence.

My own was now under imminent threat of being crushed. The overinflated sense of pride I’d been endowed with as a consequence of a working-class background was doing its work.

It ensured that my dread over meeting Herb in the ring was more to do with the people who would be watching ringside than anything he could dish out. Complicated, yes, but then life is.

First thing the next morning after a near sleepless night found me shadowboxing in front of the full-length mirrors of the walk-in closet in my tiny studio apartment. Despite carrying the weaknesses of a complete novice, I tried deluding myself that I still had enough in the tank to face Herb and hold my own.

OK, he was fit and powerful, also experienced, but so what? He still only had two arms and legs like me. And, yes, he may run half-marathons, but hadn’t my own fitness improved over time?

I ate a light breakfast of oatmeal, coffee and fruit, put on my gym gear, grabbed my bag, took one last look at myself in the mirror to gird my loins, then headed out the short walk along Hollywood Boulevard to the gym.

It was quarter past 10 when I walked into the gym. My eyes immediately scoured the place looking for Herb. He wasn’t there and my heart soared with relief. Maybe he wouldn’t show up. If so, I was off the hook.

Freddie was standing across the other side of the gym instructing a young prospect on one of the bags. He saw me and waved. I waved back and started getting ready for my workout. Over to the right, two fighters were in the ring working on the mitts with their respective trainers.

One of the trainers was Troy. He saw me, stopped what he was doing and called over: “Yo, white boy! Herb’s gonna knock your ass out!”

He started laughing. I tried to laugh along with him, but my stomach was churning and a weak smile was all I could muster. As I started my second round of shadowboxing to warm up in front of the mirror, there was still no sign of Herb. Maybe he really isn’t going to show, I thought, allowing myself to relax.

Then he appeared, Herb, sporting a wide grin and a set of biceps under his cap sleeve T-shirt that bulged like two small footballs.

“There he is!” Troy’s voice boomed from the ring. “There’s the man that’s gonna put white boy to sleep!”

I stopped what I was doing to high five Herb when he came over. “How y’all doin?” he said, radiating confidence.

“I’m cool,” he said. “Looking forward to working with ya.”

This was going to end badly, I could feel it. The only question was how bad?

After putting on the requisite protective cup, headguard, gloves and inserting my mouthpiece, I was already covered in sweat. Herb arrived in the ring moments after me. The entire place seemed to fall silent as we waited for the buzzer to sound the start of the opening round.

Hearing this, any last residue of confidence I’d managed to cling on to evaporated. Freddie was trying to protect me, I knew, but unintentionally his words had the opposite effect, leaving me bereft of hope that this was going to amount to anything other than disaster.

Everything now was reduced to a blur as I looked at Herb and he at me. A strange intimacy seemed to envelop us as we got ready to inflict punishment and pain on one another, creating a bond. Freud would have had a field day if he’d ever made fighters the subject of his work rather than sex-starved misfits.

The buzzer sounded, we touched gloves, and the action began.

Straight away he hit me with three jabs, one after the other. He followed up with another left jab and a right hand, both detonating off my head. I put out my left hand in a pathetic attempt at a jab and missed by a mile. Then I tried a right hand; again falling short. Now Herb came forward, hitting me at will. Before long I was against the ropes being pummelled like a heavy bag.

“Move, get off the ropes! Get your hands up! You gotta move ! You’re gonna keep getting tagged!”

By the middle of the first round it was all I could do to keep my hands up. The longest three minutes of my life ended with the sound of the buzzer. I staggered over to Freddie at ringside.
He fed me some water. I was so out of breath and the mouthpiece felt like such an encumbrance, I started coughing as soon as it hit the back of my throat.

Freddie undid the headguard and as soon as he took it off I climbed out of the ring like a man clambering out of hell, conscious of the eyes on me though too exhausted to care. I wandered over to the chairs and slumped myself down.

What could I say? He was right.

This is an abridged extract from John’s upcoming book — This Boxing Game: A Journey in Beautiful Brutality — now available to pre-order online from Pitch Publishing and all major booksellers.

Sunday 23rd Feb 2020
Macron says Brexit cannot be allowed to affect Common Agricultural Policy subsidies
Thursday 20th Feb 2020
Over 1,000 journalists from across the world unite in defence of Julian Assange
Sunday 23rd Feb 2020
An apology for the cartoon published last Tuesday
Monday 24th Feb 2020
Editorial: The US doesn’t want its crimes exposed – because they are still going on
Monday 24th Feb 2020
BBC urged to ‘stop trying to compete with Fox News’ after ‘giving racists a platform’
Join the 501 Club