AMID the hype around the restart of Premier League football, which began with the giddying prospect of a clash between Aston Villa and Sheffield United, there was an abrupt reminder of more sobering issues.

In what now feels like the distant past of a week-and-a-half ago, referee Michael Oliver blew the whistle to kick off the much-anticipated return of top-flight English football, only instead of initiating the kicking of a ball, it prompted everyone on the field to drop to one knee.

It was a powerful moment, boosted by its unexpectedness and the importance of the message it sent. It was a moving show of support to the Black Lives Matter movement.

Players donned the name of the movement on the backs of their shirts in place of their own names, as this global campaign for freedom, liberation and justice reached one of the most diverse and highest-profile sports leagues in the world.

It’s a league which has just crowned new champions. Liverpool’s dismantling of Crystal Palace and Manchester City’s subsequent loss at Chelsea this week saw the Reds win the title for the first time in 30 years.

The club’s Scouse right-back, the local heartbeat of the team, Trent Alexander-Arnold, has been using this high-profile moment to raise awareness of the aims of the Black Lives Matter movement, alongside his social-media posts anticipating and then celebrating a historic title win for his boyhood club.

The boots he wore during Liverpool’s first game back — a Merseyside derby meeting with Everton — bearing the words Black Lives Matter, are being auctioned, with the funds raised going to the Nelson Mandela Foundation which promotes the revolutionary leader’s vision of freedom, equality and social justice.

"It can no longer just be our feet where we express ourselves,” Alexander-Arnold said in a post on his social-media channels last week.

"We have to use our profile, the platform we have and the spotlight that shines on us to say: ‘It’s time for meaningful change’.

"The system is broken, it’s stacked against sections of our society and we all have a responsibility to fix it.”

Across town at City of Liverpool FC, the values Alexander-Arnold speaks of and the change he espouses are written into the club’s constitution. Equality and diversity are part of their core values, tying in with their supporter-owned, community-benefit structure.

The club’s support of local refugees, through weekly football sessions and day-to-day help and advice, spawned an idea and concept for a football shirt representing the diversity of the region and those involved.

“The shirt was initially designed for our refugee football team with a lot of input from our refugee players who have helped design the kit,” says COLFC in the Community director Sean Lindblad.

"We wanted our refugee and asylum-seeking team to feel proud when they played, and to give them a sense of ownership behind the kit.

“To be proud of their identity and heritage instead of hiding it away.”

Though the kit was originally for the refugee team, the design and the idea behind it have proven so popular, and align so well with the club’s ethos, that it will now be City of Liverpool FC’s official third kit for the 2020/21 season. 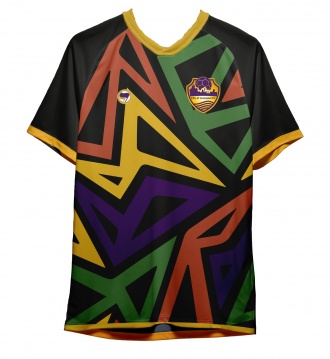 A shirt designed by and for refugee footballers will now take its place in the English football leagues.

“We share the common language of football with these lads, most of whom have arrived here from warzones,” adds Lindblad.

“Particularly in the continuing climate of the rise of the far right, we feel it appropriate to get away from the ‘football lads’ culture and the ‘white lives matter’ movement of Tommy Robinson and his ilk.

“The kit was initially planned for our refugee team to wear but our first team will also wear it next season, representing Liverpool as a city of diversity that is open to everyone.”

While City of Liverpool will be wearing a “Love COLFC Hate Racism” kit with an anti-fascism logo in the English football's lower divisions next season, Liverpool FC, one of the highest-profile teams in the most-watched league in the world, will lift the title with 'Black Lives Matter' proudly emblazoned on the back of their shirts.

Alexander-Arnold hopes that this period will be a turning point, and that the awareness raised during these times will provide the education needed to change minds and alter attitudes.

“I also have hope,” he added. “Hope that the world is awake in this moment. Finally willing to learn.

“So while we have this opportunity, where people are listening — let’s speak, educate, campaign and let’s promote the message that better education brings change.