WHY has a second-rate German football team become one of the biggest global brands of the beautiful game? Because all around the world, people hate fascists.

St Pauli FC play, mostly badly, in the German second division. St Pauli is a working-class, bohemian, edgy but very welcoming district of Hamburg famous for the Reeperbahn, the Beatles and, now, for its football team.

Despite being a pretty mediocre team that has spent limited time in the top flight of German football, St Pauli merchandise is the fourth biggest selling of all clubs in Germany (behind Bayern Munich, Borussia Dortmund and Schalke 04); worldwide the St Pauli brand and associated merchandise has become huge with supporters’ clubs across the globe: Glasgow, New York, India, Athens, Yorkshire among other places.

Why does a second-rate team matter so much? It’s about the values and the principles: supporting St Pauli isn’t about chasing glory on the field, it’s a statement about your world outlook, your ‘weltanschauung’ in German.

St Pauli has become the guv’nor left-wing club, a powerful symbol of anti-fascism, anti-sexism, resistance to racism, grassroots left-wing politics, and extending a hand to refugees rather than demonising them. As politics has grown more contentious and issues re identity, race, immigration and inequality have forced more divisions across western societies and the far right cast a longer and darker shadow, support for St Pauli has grown exponentially in Germany and internationally.

The club’s growth is a symptom of our times and maybe offers a focus for change: that’s why they matter. 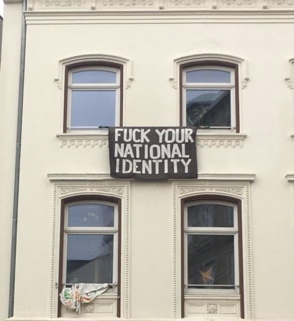 My abiding memory of my first trip to see St Pauli was this banner from a flat window near the Shebeen pub, one of the two most famous St Pauli football bars in the neighbourhood.

What is the story behind this expression of internationalism that summarises the ethos of the club?

The club began its existence in 1899 as a loose, informal group of football enthusiasts in the St Pauli area. They didn’t play as a separate St Pauli football team until 1924 and played with no real distinction in various low-level leagues till the end of World War II.

Since the war, the club has also had a pretty undistinguished footballing history, spent mostly in the German second tier, the limited highlights including a win against Bayern Munich, the then reigning World Club Champions, in 2002 and a few wins against the hated local rivals SV Hamburg, by far the biggest club in the city.

SV have hit upon hard times and are now in the second flight of the Bundesliga with St Pauli.

St Pauli beat SV 2-0 in both derbies this year, a source of great joy. Despite those victories, St Pauli lay in mid-table obscurity as the season closed in March due to the coronavirus crisis.

But nobody really follows the team for the football; it’s all about the craic, along with the chilled-out and sexy left-wing vibe.

In the 1980s more and more alternative people, left-wing types and squatters moved to the St Pauli area; they started going to football and they decided to act inside the stadium as they did outside, so they did not accept any racism or right-wing hooliganism. This was the start of the transformation of St Pauli FC into a “kult.”

It was this generation that started the vibe. I remember reading about the club in the English football magazine When Saturday Comes in the late 1980s; I resolved then to go see the club one day; if I’d gone then, it would have been much easier getting a ticket; the club were more of a locally based kult than the international phenomenon they are today.

During the ’80s and ’90s, right-wing hooliganism linked to neonazism was threatening football right across Europe, but St Pauli fans took a stance then which has developed into the club’s raison d’etre and ethos: they became the first team in Germany to officially ban right-wing nationalist activities and displays within the ground.

During those decades support grew considerably. Many of the new fans came from SV Hamburg, a tad shocking for those of us born into a football culture that views changing your club as not just taboo but beyond any pale marking out the limits of acceptable human behaviour, particularly if it’s to your city rivals.

But in the 1980s, as right-wing extremists began to take over football terraces across Germany, including at the Volksparkstadion, the stadium of SV Hamburg, many fans began to turn their backs and look for an alternative — which they found at the Millerntor.

“They say that you can never change your football club, but in Hamburg in the 1980s that was different,” explains Jorg Marwedel, a Hamburg-born author and journalist with Germany’s Suddeutsche Zeitung. “I grew up a HSV supporter, but the whole situation with the neonazis became too much for me — and I wasn’t the only one.”

To this day, there are no openly right-wing or fascist groups to be found on the terraces at the Millerntor, in stark contrast to other German clubs who have suffered problems with neonazis, including SV.

In direct opposition, St Pauli’s fan clubs run a series of proactive and progressive social projects including multicultural football for youngsters and support for refugees arriving in Hamburg from conflict zones such as Syria and Afghanistan.

At the height of the refugee crisis, the club welcomed newcomers to sleep inside the stadium after they arrived in the middle of the night.

St Pauli currently supports organisations rescuing refugees in the Mediterranean Sea by inviting them to collect money at home games.

Abroad, there are at least 50 international fan clubs including Yorkshire St Pauli in England, one of the largest, with about 130 members.

They meet in Leeds to watch matches and organise trips to Hamburg, and offer football sessions to asylum-seekers and refugees.

“We put on the matches in local bars and run Football for All, which is about providing a space for asylum-seekers and refugees,” says Webster, who visited Hamburg six times last season to watch his team.

“There is so much happening around the club that it’s not just about football,” Webster adds, explaining that opposition to racism is a major attraction and that Yorkshire St Pauli have been proactive in opposing the far right in England, where football fans have been prominent in the rise of two extreme nationalist groups, the English Defence League and the Football Lads Alliance, who’ve both been involved in street violence.

Webster says resistance to the far right has been growing, and club members took to the streets recently to support a counterprotest organised by the Anti-Fascist Network against a far-right organisation.

“The fan club recognises we have a role to play in this, rather than just saying: ‘We are anti-racist.’

“We need to act on that philosophy and not just hold it up as a label.”

His sentiments are shared in Scotland, where Glasgow St Pauli fans, inspired by the “No Football for Fascists” sign painted across the stands in Hamburg, sport the slogan: “Nae Fitbaw for Fascists” on T-shirts.

In July 2018, a new anti-fascist football group was formed in Britain. Following the transition of the Democratic Football Lads Alliance into a right-wing group backing former English Defence League leader Stephen Yaxley-Lennon (Tommy Robinson), the new Football Lads and Lasses Against Fascism (FLAF) was started by fans who were fed up with racism.

With the mission statement: “For working-class unity against fascism,” the group has more than 15,000 followers on Facebook, suggesting a growing anti-racist movement among British football fans.

In the United States there is more St Pauli-inspired activism in both New York City and Buffalo. As one of the newest fan clubs, FC St Pauli Buffalo is celebrating its first anniversary this month.

Founder Ernie Thalhamer says a main aim is to fight “rampant racism” and to support the 15,000 refugees living in the Buffalo area.

Likewise, a fan club established in New York City says that supporting marginalised people is fundamental to its members.

FC St Pauli Fans New York City (aka the East River Pirates) was formed in 2008. For member Shawn Roggenkamp, the political culture of St Pauli is as important as the football.

The club has raised money for the Immigrant Defence Project, which does national advocacy work for immigrants’ rights, and it has links to activists who organised anti-fascist demonstrations in Charlottesville in 2017, when Heather Heyer was killed during violent protests by neonazis. The club later raised money for people who were injured in the attack.

“Our group is half American, half German, some from Hamburg,“ says Roggenkamp.

“Some Germans were not even St Pauli fans but they joined us for the social aspect because they believed in the politics and they were interested in the community.

“It doesn’t really matter if your first team is St Pauli as long as you’re being a good person.”