Cartoons Many a truth said in jest

JEMIMA JARMAN and MORGAN WADSWORTH-BOYLE, curators of the exhibition of Jewish Cartoons, explain how it came about and the continuing importance of the many subjects it touches upon

The ground floor gallery in the Jewish Museum London has been temporarily transformed into a Comic Book Artist in Residence studio as well as an exhibition space for the display of cartoons, caricatures and comics by an eclectic mix of Jewish artists, past and present. 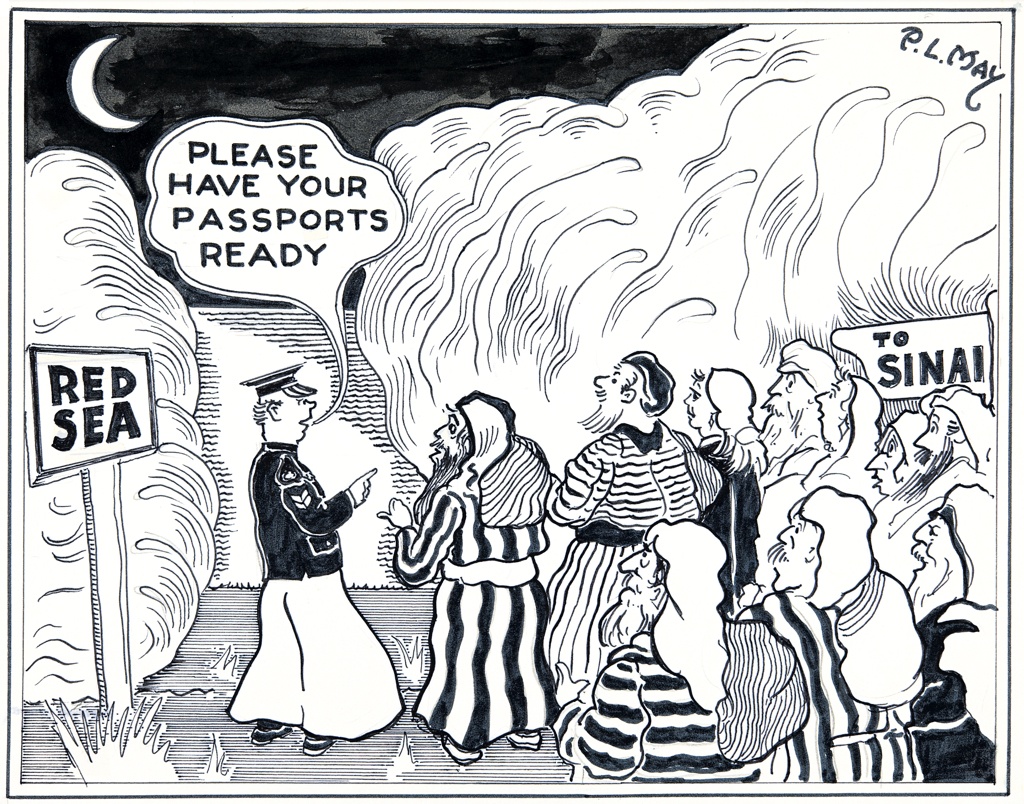 Passports Ready by Phineas May

The work is grouped according to three main themes — Jew(ish) London, Anglo-Jew(ish) Life and Jew(ish) Voices. The (ish) is deliberate, to prompt audiences to reflect on what makes a cartoon, or any piece of art, “Jewish”?

As the titular pun implies, the bulk of the material on display comes from the museum’s own collection — this was the curators’ original intention.

However, as the exhibition was being assembled it was realised that none of the cartoons in the collection was drawn by female artists and none of the work was contemporary. 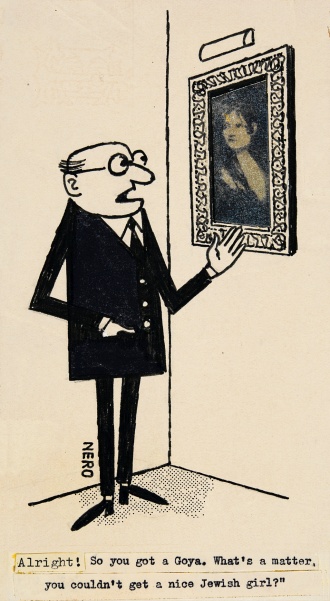 Fearing that the exhibition would be “male and stale,” it was decided to proactively seek out contemporary female Jewish cartoonists who would be willing to loan their work, thereby bringing the content into the present day.

The central piece of the exhibition is an powerfully political print from 1754, in a style that might have later  inspired James Gillray or George Cruikshank, entitled The Great Vermin Catcher of Great Britain.

It shows a British gentleman sat upon a throne-like chair with vermin baiting tools in hand, guarding a gateway symbolising the entrance of the country. A swarm of men on horses gallop towards the gates in an attempt to gain entrance. Many have speech bubbles attached to them, with statements such as “I am used to dirt” or “everyone for themselves.”

The print forms part of a fascinating collection of over 1,600 popular images amassed and later donated to the Jewish Museum by one of its founders, Alfred Rubens.

These images range from the early 18th to late 20th century and provide a wealth of information as Jews are often depicted in them as anti-semitic or romanticised stereotypes. 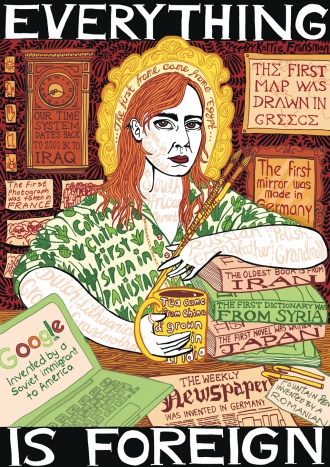 Everything is Foreign by Karrie Fransman

The exhibition traces the path of many Jewish immigrants to Britain. Jew(ish) London, sees them move on from the tenements of the East End to the leafy suburbs of Golders Green and provides a glimpse of Anglo-Jew(ish) Life, where we find artists dwelling on the good, the bad and the funny aspects of assimilation.

Humorous material from the classic Jewish newspaper cartoonist Harry Blacker, aka Nero, proves the saying “the old ones are the best ones” in a dad-joke sort of way.

In a similar vein, the drawings of Phineas May bring out a chuckle with his very British-Jewish jokes which, while light-hearted, illustrate underlying concerns of secularisation. 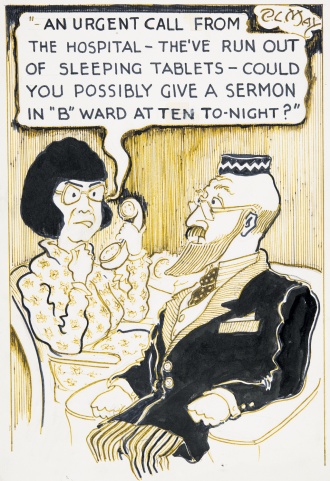 Sleeping Tablets by Phineas May

Exploring what it means to be Jewish when you are completely assimilated is the main question explored in the work of Corrine Pearlman’s Playing the Jewish Card an autobiographical comic strip series.

In the Jew(ish) Voices section the cartoonists turn their focus from internal community matters to external world issues where the striking work of Karrie Fransman and Ella Baron — winner of the Cartoon Museum’s Young Cartoonist (under 30) of the Year 2017, really stands out.

From the Facebook/Cambridge Analytica scandal, to the refugee crisis and challenging society’s perception of what is “foreign,” both Fransman and Baron’s skilful comic and cartoon creations will leave a lasting impact on the viewer.

The final piece on show is the haunting Seeking Refuge, by Ella Baron, eerily bookending the exhibition with the opening Vermin Catcher of 1754. 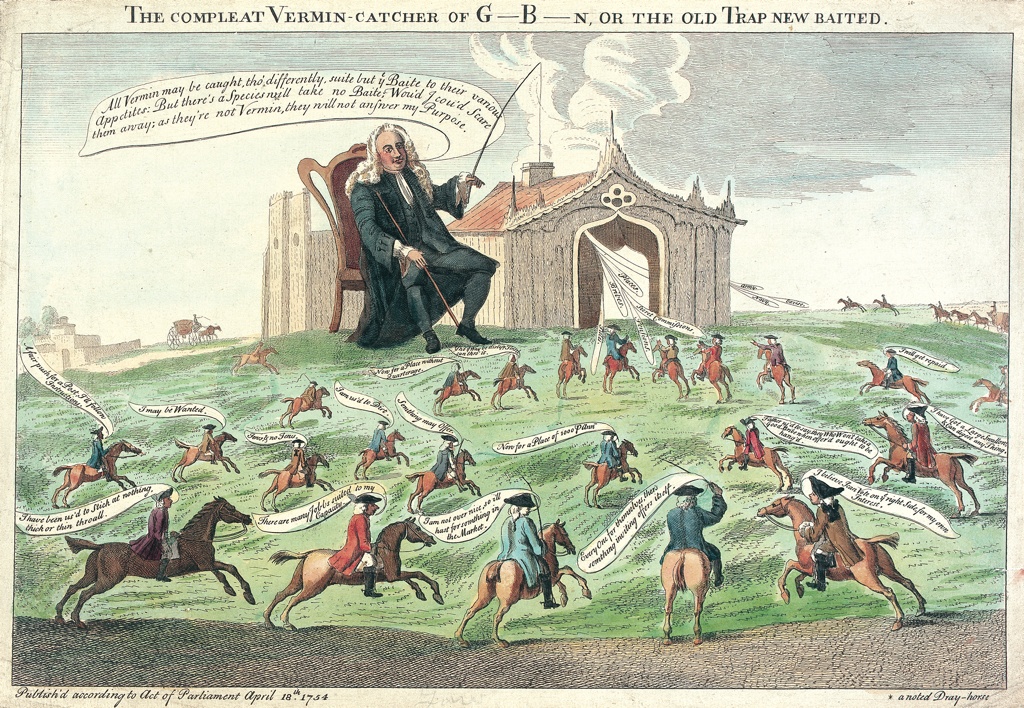 While not an official theme of the exhibition, the issue of immigration and anti-immigration sentiments runs across the 250 years of cartoon history represented here on a micro scale and it is hoped will contribute to these ongoing debates.

Until September 16 2018. Free. Further information on all accompanying events, including Laydeez do Comics on August 13 and details on the various comic book artists in residence, visit jewishmuseum.org.uk.