Engrossing insights into culture, philosophy and the contradictions of existence from the master of 'contemporary weird'

M JOHN HARRISON says that ideas limit storytelling and he is equally unenthusiastic about plot and closure, because replicating the traditional structure and interpretation of stories is to accept the world as it is. 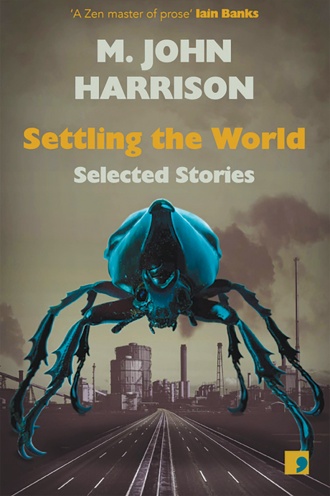 the World. Drawn from half a century of Harrison’s writing, they are crammed with strange and unforgettable images, as in The Causeway, where an interstellar traveller discovers an immense granite structure projecting thousands of miles into the ocean and encounters a lemming-like human procession.

Harrison has a poet’s eye for the built environment but is equally adept at depicting landscape and light. Running Down focuses on the plight of Lyall, a disappointed Cambridge graduate drawn to far-right politics, who believes himself to be a lodestone for dangerous energy.

He flees to the Lake District to escape the increasing disorder of his life in London and, as Britain descends into political violence instigated by the “Patriotic Front,” his life is rocked, literally, by a vividly described geological calamity.

It is the reader’s task to interpret the story and assess whether Lyall really is the personification of entropy.

Many of these tales are leavened with bleak humour and deftly realised failures of communication but I Did It is a rare excursion into out-and-out comedy. An absurdist reflection on auto-aggression as a statement of identity, it explains how Chelsea’s disappointing performance against Portsmouth leads a pair of former lovers to embed axes in their own faces.

Harrison’s fascination with obsession is apparent in The Incalling, which involves a sleazy and unsettling ritual in Camden, while The Gift concerns a defaced and battered book that seems to lend meaning to the lives of desperate people and Cicisbeo is a story of home improvement running amok.

It might be a metaphor for emotional collapse, the decline of the family or toxic aspects of middle-class suburban existence — or something else entirely.

Some stories draw on the motifs of science fiction and fantasy, others occupy a curious hinterland in which the traditions of the weird collide with those of the literary. Harrison’s elegant sentences can imbue a cramped flat with the same intense specificity as a parallel universe.

And whether the experiences of his characters are supernatural or mundane, we can’t help but be drawn into their yearnings, confusions and losses.

A Young Man’s Journey to Viriconium, in which there is a portal to a mythical and decadent city in a cafe toilet in Huddersfield, is key to understanding Harrison’s writing. While others have entered Viriconium, the narrator cannot. It is a city of violence and horror but this very intensity lends it an irresistible allure — we are damaged by our fantasies but we continue to need them.

Settling the World is a collection for enthusiasts of the contemporary weird. But it will appeal to anyone who loves elegant writing and new ways of looking at culture, philosophy and the contradictions of existence.