FAR-RIGHT thugs launched an unprovoked attack on senior RMT official Steve Hedley at the weekend after he and thousands of other anti-fascists had turned out in central London to oppose a “free Tommy Robinson” march. 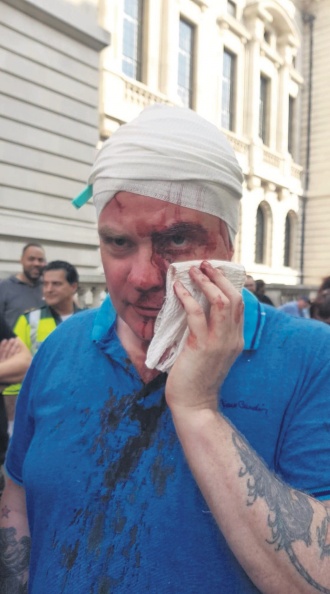 The Whitehall march by Mr Robinson’s supporters called for the release from prison of the former English Defence League leader, who has been jailed after being convicted of contempt of court for the second time in a year.

Organised by Stand Up To Racism, two anti-fascist marches several thousand strong joined at Parliament Square and marched together down Whitehall before hearing from trade unionists, political activists and representatives of faith groups about the need to stand up to a resurgent far right with a message of “equality and unity.”

The counterdemonstration passed largely without incident, save for small pockets of far-right supporters shouting abuse from the side of the road, until Mr Hedley was subjected to a “completely unprovoked” attack by “a load of thugs.”

Mr Hedley, the RMT union’s senior assistant general secretary, said he and his comrades were outside a pub on Storey’s Gate in Westminster after the anti-fascist marches when a group of Robinson supporters attacked with glasses and chairs.

Met Police said a total of 12 people were arrested on Saturday, including eight men detained on suspicion of assault at Storey's Gate.

Mr Hedley said the attack showed that “people need to understand that these people are not about free speech.

“It’s all right to have free speech for Tommy, but if you oppose Tommy you get attacked by a glass and a chair and we have to stop this.”

Earlier in the day, fascists also blockaded a bus driven by a woman in a headscarf near Trafalgar Square.

Weyman Bennett, co-convenor of Stand Up To Racism, said: “While anti-racists joined a peaceful protest, Robinson’s thugs were once again let off the leash.”

He added: “Their targets, trade unionists and Muslim women, says everything about what this movement is about.”

He said the far right was “preying on the fears of working people” and said anti-racists needed to “engage with those who are being preyed upon,” adding: “We need to be clear in our opposition, but clear about what we stand for: equality and unity.”

Stop the War Coalition national convenor Lindsey German said Donald Trump’s election victory had been a “gigantic boost” for the far right all over the world, adding that he was “using his position as president to support the far right and the fascists in any way he can.”

Labour London Assembly member Unmesh Desai said that Mr Robinson had claimed he was “scared to walk on the streets of London,” adding: “And so he should bloody be!

“At Cable Street, the Establishment told people to stay at home, but they came out in their thousands to stop the fascists. The spirit of Cable Street lives on,” Mr Desai proclaimed.