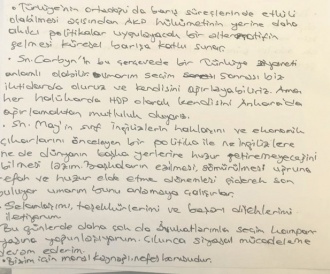 In an exclusive interview with the Morning Star, Demirtas answered questions posed on social media in a handwritten letter via his lawyers and campaign team.

He is the first political leader in history to campaign for presidential elections from his prison cell. He described himself as a “political hostage” and said he is being held because the government and Turkey’s authoritarian President Recep Tayyip Erdogan fear him.

The innovative press conference was held as Demirtas is denied access to the media or the general public to spread his election message and address his supporters.

“I can not campaign from inside here as I’m a hostage. That’s the problem. If I were out there, I’d be much more capable,” he said.

Turkish media has been “strangled” by Erdogan, with hundreds of publications and news organisations closed and more journalists jailed than any other country.

The People’s Democratic Party has faced a near total media blackout, receiving limited coverage of its election manifesto and with political rallies and meetings subject to violent attacks by authorities and fascist gangs.

The opposition leader, who faces 142 years in prison on trumped-up terrorism charges, is challenging Turkey’s tyrannical leader in next month’s snap presidential and parliamentary elections, which are seen as a landmark in the country’s history, offering a choice between “freedom and democracy or authoritarianism or war.”

Controversial constitutional reforms were passed last year in a rigged national referendum marred by widespread corruption, including results announced on state television while ballot boxes were still in polling stations.

The government-controlled Supreme Election Council allowed 2.5 million unstamped ballots to be counted, which played a decisive outcome in the result, tipping the balance in Erdogan’s favour.

Many have suggested the changes will bring “fascism via the ballot box” and one-person rule in the country with the president able to appoint government ministers, members of the judiciary and, more chillingly, shut down parliament and rule by decree.

Despite the ongoing human rights violations across the country, with a state of emergency targeting all layers of society, the British government has rolled out the red carpet for Turkey’s tyrannical leader and continues to sell him weapons.

Prime Minister Theresa May visited Erdogan in Ankara last year where she signed off a £100 million fighter jet deal, a gateway package worth billions to the British economy which will allow Turkey to become self-sustainable in developing weapons in the future.

And she caused outrage in welcoming the Ottoman revivalist to London last month in a desperate attempt to shore up trade deals, putting profit above human lives once again.

Britain’s Kurdish community were angered after she praised the “war criminal” for leading a fight against “Kurdish terrorism,” branding her comments racist and inflammatory, criminalising an entire community.

They responded by demanding she apologise and retract her remarks reminding May that Kurds led the fight against terrorism, defeating the Isis death cult in northern Syria making communities in the West safer as a result.

Demirtas told the Star that the Prime Minister “needs to know that with a policy that prioritises the rights and economic interests of the British government she can’t bring peace for the rest of the world.

“The time of gaining wealth and peace by the exploitation of others is swiftly coming to an end. I hope the British government tries to understand this.”

Activists have pleaded for action from the Labour Party in Britain with international silence as HDP MPs are being jailed across the country.

Demirtas appealed for Corbyn to help Labour’s sister party in Turkey where thousands of activists have been jailed along with their political leaders.

The oppressive attacks on the HDP are an attack on democracy and the political equivalent of May locking up Corbyn and John McDonnell in Belmarsh Prison without charge and rounding up the entire of Momentum.

“A visit to Turkey by Mr Corbyn to Turkey would be meaningful in this context,” Demirtas said, representing a major boost to the party and democracy in the country.

“We hope that after the election we will be in government and we will be able to host him. But in any case we would be happy to welcome him as our guest as the HDP in Ankara.”

He stressed the importance of next month’s elections, not only for the future of Turkey but for world politics. The country borders Syria and Erdogan’s illegal invasion of the peaceful people of Afrin has destabilised the area with an ethnic cleansing operation being waged against Kurds.

More than 170,000 have been driven from their homes as the Turkish army allies with jihadists from the Free Syrian Army on the pretext of fighting terrorism.

There have been accusations of rape, beheadings and chemical attacks as Erdogan promises further operations, including taking control of Manbij and positioning military bases in northern Iraq.

“For Turkey to have a meaningful contribution to peace in the Middle East and globally, an alternative needs to come to power that will implement more intelligent policies than we see under the AKP government,” he said.

He explained that he spends most of his time working on his election campaign and remained optimistic about his release, saying: “I will continue my political struggle when I get out.”

Demirtas stressed the importance of international support for him, the HDP and the people of Turkey. “Solidarity is a source of morale and a platform to breathe,” the presidential hopeful tells me.

In a message to those attending today’s inaugural AGM of the Kurdistan Solidarity Campaign, Demirtas said: “I send my greetings, gratitude and wish them every success.”

The campaign will be sending a delegation to observe next month’s elections from where I will be reporting for the Morning Star from the Turkey’s largely Kurdish south-east.

Inventors of the unknown

Campaigners praise protesters for foiling the removal of Glasgow asylum-seekers

Muna is Palestine, Yakub is Israel: the untold story of Sheikh Jarrah

The Tories are launching a new authoritarian government