INTERNATIONAL activists and Palestinians were hospitalised yesterday after being stamped on, dragged by the hair, strangled and pepper-sprayed by Israeli border police during mass demolitions in East Jerusalem. 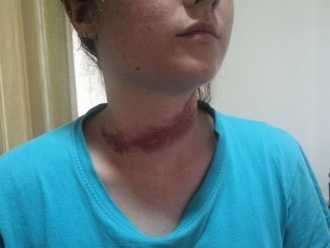 Bethany Rielly's neck injuries, one of the hospitalised activists

Around 900 Israeli soldiers were called to the area on Monday morning with trucks of demolition equipment to bulldoze three Palestinian apartment blocks, including an unfinished block which they had spent 15 hours rigging with dynamite.

Soldiers smashed down the door of Mr Obeide’s house and immediately pepper-sprayed him in the face.

Mr Lorigan said: “I was dragged by my feet and lifted up, kicked in the stomach, then one soldier in particular stamped on my head four times, at full force.

“Standing on my head and pulling at my hair, he then stamped on my throat and others started punching my torso. It was a sadistic display of violence by the border police.” 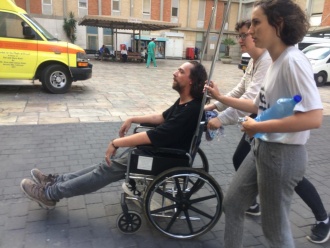 Chris Lorigan is taken to hospital

After Mr Lorigan told the soldiers he would leave they continued to beat him and threw him through a table. At one point they also tried to pull his trousers off. He suffered a fractured rib and severe bruising to his chest, legs and face.

Twelve Palestinians were also hospitalised for tear gas inhalation and rubber bullet wounds as residents were kicked in the back down flights of stairs and two were illegally shot at close range with rubber-coated steel bullets.

The protesters were all admitted to Makassed hospital in East Jerusalem where they were treated for their injuries.

International activists from the US, France, Spain and Austria, along with dozens more Palestinians, were also injured in the attack.

Three homes in West Bank’s Area A, designated by law as being under full Palestinian Authority control, were destroyed on Monday for “security reasons” through a 2011 Israeli military order that states any house close to the apartheid wall could be demolished.

At least 16 unauthorised Israeli settlement “outposts” have been established in the West Bank since 2017, a Peace Now report revealed on Monday, with Israeli authorities turning a blind eye to the expansion and at times helping to retroactively “legalise” the outposts.

A total of 31 such outposts have been established since 2012, according to Peace Now.

Under international law all settlements in the occupied Palestinian territories are illegal.

Tory ministers have no plan to tackle child poverty as rates expected to rise, MPs say