Malta allows the Ocean Viking to disembark its 356 rescued migrants

European states must take a hard look at the role they are playing in trapping people at sea, says MSF's project co-ordinator on board the ship

The crew of the Doctors Without Borders (MSF) and SOS Mediterranee ship saved the lives of 356 migrants off the coast of Libya in three separate rescue missions two weeks ago.

UPDATE: 356 survivors rescued in the #Mediterranean are now being transferred from the #OceanViking to #Malta on board a maltese military vessel.

After nearly 2 weeks stranded at sea, a coalition of #EU countries finally stepped up to grant them a place of #safety pic.twitter.com/xh5Nrf1foX

Both Malta and Italy closed their ports to the ships of humanitarian NGOs after the rescues, forcing the Ocean Viking to remain in international waters between the two Mediterranean nations.

This morning, however, Valletta finally allowed the ship to dock after France, Germany, Ireland, Luxembourg, Portugal and Romania agreed to host the rescued migrants.

BREAKING: After 14 days of unnecessary suffering all 356 people onboard #OceanViking will finally disembark to #Malta

While some #EU States finally stepped up with a humane response to this humanitarian disaster in the Med, a predictable disembarkation mechanism is needed now! pic.twitter.com/t2rTfKL4Wi

MSF said it was relieved that the Ocean Viking had been offered a place of safety but added that European governments must urgently set up a disembarkation mechanism for people rescued at sea.

Jay Berger, MSF project co-ordinator on board the Ocean Viking, said: “We’ve treated the war wounded who were trapped on the front line of the conflict in Tripoli and seen the scars of those who lived through the Tajoura detention centre air strikes.

“We’ve talked to the survivors of shipwrecks and interceptions. We’ve heard stories of brutal beatings, electrocution, torture, including by melting plastic and sexual violence, with even children not exempt from these horrors.

“European states must take a hard look at the role they are playing in trapping people in these situations.”

Meanwhile, Italian charity Mediterranean: Saving Lives announced today that its ship the Mare Juno had left Sicily at sunset on Thursday “to return to the central Mediterranean to monitor and report human rights violations and, where there are people in danger, to save lives.” 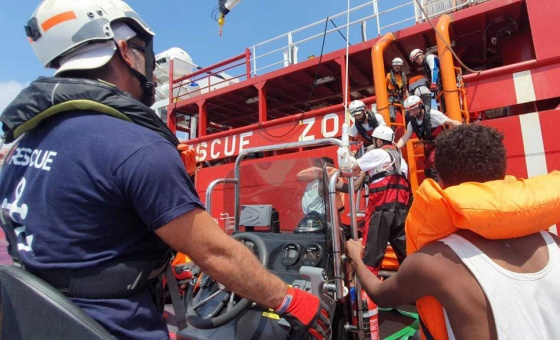