HEALTH workers at a besieged refugee camp in a contested area of northern Iraq issued a call for urgent support today  as news of a deadly Covid outbreak long-feared by residents was confirmed.

At least five residents of the Makhmour refugee camp are reported to be fighting for their lives, with at least 19 more believed to have contracted the virus, although real numbers are impossible to confirm due to a lack of testing equipment.

Medics have long warned of a severe shortage of vital medicines and equipment needed to deal with the pandemic, but appeals to the UN, the World Health Organisation and other bodies have been ignored, with officials not even receiving a response.

When the Morning Star visited Makhmour earlier this month, doctors and the co-chairs of the camp’s health commission warned that an outbreak would be “devastating,” and said they feared a huge and disproportionate loss of life.

With an outbreak now confirmed, health professionals and camp officials have issued an urgent appeal for international solidarity and for cash to buy equipment including masks, gloves, ventilators and other essential materials to help them beat the disease.

Dr Medya Mustafa told the Star that the camp had established an emergency coronavirus clinic to deal with the more critical cases, and the five who are reportedly in a more serious condition are being treated there. 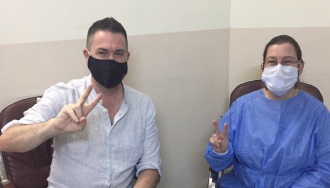 “It has 10 beds and some oxygen bottles but not enough, we need some more. For now the situation is under control, but when the cold bites it will be terrible,” Dr Mustafa said.

Dr Mustafa emphasised that the camp has no ventilators and warned that people would die due to a blockade imposed by the Kurdistan Regional Government (KRG) last year and the inaction of the UN.

“We desperately need basics such as masks, gloves and bedsheets to protect health workers and residents,” Dr Mustafa said. “If any organisations are able to help send equipment it would be such a help as we are short of even basics.”

When the Star visited the clinic there were about 10 cardboard boxes and two oxygen cylinders stacked up in one of the rooms, which health committee co-chair Ismail Ayaz confirmed contained the camp’s entire supplies to deal with the outbreak. 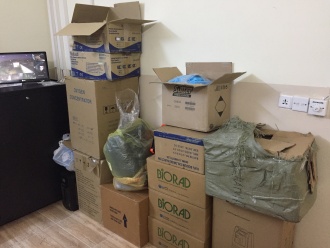 The camp has been under an embargo since July 2019 after a Turkish intelligence agent was shot dead in the regional capital Erbil. Officials linked to the ruling Kurdistan Democratic Party (KDP) insisted the measures were necessary on security grounds.

But no evidence has emerged to link the camp to the killing, despite many of its residents being quizzed by the authorities.

Despite efforts to reach the KRG there has been no response regarding the continued blockade of the camp – an act of collective punishment that wuld be illegal under international law.

Similar attempts were also made to reach the UN – and the Morning Star finally elicited a bizarre response in June after weeks of emails in the wake of a Turkish missile strike and the alleged use of chemical weapons.

Spokesman Firas al-Khateeb denied that the UN had any role in the management of the camp and insisted that it was the responsibility of the Iraqi Ministry of the Interior.

He claimed that “UNHCR is not aware of the KRG-imposed blockade aside from the travel restrictions imposed in the context of Covid-19.” 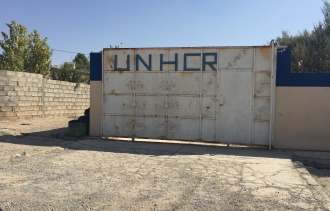 The UN official also insisted that the UN had not received any reports of a missile strike on the camp: a barely credible response given extensive media coverage and that the Turkish armed forces admitted to the bombing carried out as part of Operation Claw Eagle, the military offensive it claimed was targeting the Kurdistan Workers’ Party (PKK).

Camp officials were stunned when they saw the response from the UN, although not surprised. They believe the abandonment by the UN — who left the camp in 2014 when Isis briefly took control until they were driven out by the PKK — along with the bombing and the blockade is part of a conspiracy.

A hospital that the residents had started construction work on lies unfinished as funding and material dried up. NGOs will not come to Makhmour any more as “black propaganda” spread by Turkey tells them the camp is run by terrorists and they would be unsafe.

“We don’t understand why the UN has done this. We lost hope because of them,” a nurse at the clinic told the Morning Star.

Residents and officials believe they are being punished because some of those living in the camp support not just the PKK, but the ideology of its jailed leader Abdullah Ocalan, and that their status as “political refugees” has led to their abandonment.

Bewar Amin said that because the camp is independent and has implemented a system of democratic confederalism, it is a threat to the Barzani-led KDP, which aligns itself with the Turkish state and US imperialism.

Turkey’s President Recep Tayyip Erdogan has long railed against the Makhmour refugee camp, which was established under UN protection in 1998 by Kurds who fled Turkey in the 1990s when thousands of villages were burned to the ground in state assimilation operations.

He brands it “an incubator of terrorism” linked to the PKK, and Turkish jets and, more frequently, drones are a constant menace, with women, agricultural workers and other camp residents among those killed in air strikes.

The camp however offers a glimpse of a different way of governing society, with a grassroots democracy seeing decision-making and input from the bottom up in a series of communes and commissions that promote and ensure the primacy of women at all levels.

This includes the camp’s health commission, which sees a nurse and radiographer acting as its current co-chairs elected at a conference held every two years and that remain accountable to the 12,000 camp residents.

It is for this reason that camp officials believe they are targeted. Their fears have been compounded by the recent deal struck between the KRG and Baghdad over Shengal, behind the backs of the Yazidi residents who have led angry protests rejecting the plans.

Critics of the deal suspect there are plans to create a “Sunni corridor” in the areas that are contested between Baghdad and Erbil to divide the Kurdish enclave known as Rojava in northern Syria from supporters in Iraq and Iran.

It is likely to be an attempt to weaken support for the PKK, which retains support in Shengal for its role in liberating the region from Isis, which massacred thousands of men and boys and sold thousands of Yazidis into sexual slavery.

During our conversation Dr Mustafa, who hails originally from Hamburg in Germany, expressed concern about the Covid-19 situation in Europe and figures from her home country and Britain showing worrying signs of spiraling out of control, and she hoped we would remain safe.

But she appealed directly to trade unions, health workers and others to do what they can to ensure that medics have the necessary equipment and supplies to treat residents of the camp.

“Please support us,” she said. “We have no testing equipment or basic supplies and people are struggling for their lives.”