Exclusive: Revealed: EU to continue supporting the Libyan Coastguard despite its fears of human rights abuses

Members of the Ocean Viking rescue ship pick up refugees from a rubber dinghy, close to an oil platform near Sabratha, Libya earlier this week. Europe has yet to provide the ship, which is carrying over 270 rescued people, with a port of safety. Photo: Anthony Jean/SOS Mediteranee
×

THE EU intends to continue supporting and training the Libyan Coastguard and its refugee interceptions despite the bloc’s concerns that the war-torn country’s government may be violating the human rights of migrants and profiting from their detention, the Star can reveal.

In response to a freedom of information request regarding the bloc’s funding, training and equipping of the Libyan Coastguard, the EU provided the Star with a redacted version of a document dated September 4 2019 from the Presidency of the Council of the European Union to member state delegates.

This document, which is stamped “public” briefly mentions the EU’s concerns over the inhumane conditions inside Libya’s detention centres. 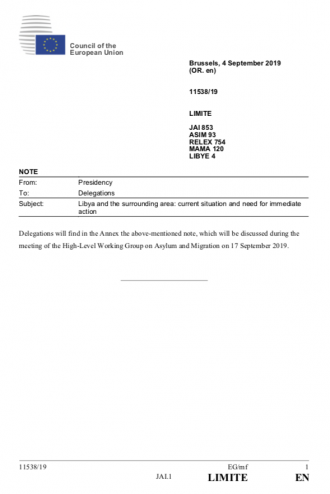 The unredacted version of the document

However, in the unredacted version of the document which this paper has also obtained, the Presidency outlines a fuller picture of the horrendous conditions that migrants and refugees face inside the country’s detention centres.

“The [Libyan] government has continued to arbitrarily detain migrants, many of whom are in a vulnerable position,” the document says.

“The centres suffer from overcrowding and the conditions are poor. In particular, there are difficulties in relation to sanitary facilities and food and water supply.

“Severe human rights violations have been widely reported. Some of the detention centres are alleged of having links to human trafficking. There is no proper registration system for migrants. Serious cases of corruption and bribery in the centres have been detected.”

The note states that Libya has failed to take any steps to improve the situation in its detention centres so far and worries that “the government’s reluctance to address the problems raises the question of its own involvement.” 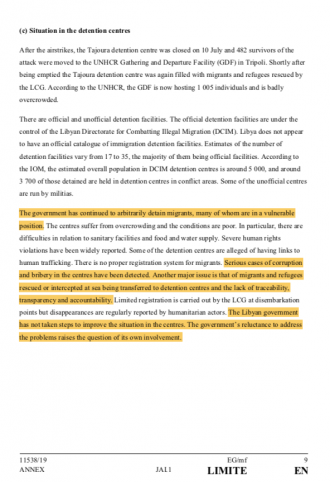 The reason the bloc did not release the unredacted version of the Presidency’s note, the EU said, was because its undisclosed analysis and commentaries on the situation in Libya and the role of its authorities would, if released to the public, “have a negative impact on relations between the [EU] and Libya, undermining the EU’s international relations.”

The UN’s refugee agency (UNHCR) and the International Organisation for Migration (IOM), as well as the many civil refugee rescue ships that are saving thousands of lives off the coast of Libya, have long warned about the horrors faced inside the country’s detention centres and that the Libyan Coastguard was returning people to them.

In the public version, the document praises the Libyan Coastguard as having “continued operating effectively.”

However, the unredacted version tells a story similar to the complaints raised by the civil refugee rescue organisations and confirms that the bloc knew that refugees and migrants intercepted by the Libyan Coastguard were being put in danger.

The document highlights the case of the Tajoura Migrant Detention Centre bombing in July 2019 in which at least 50 people were killed and 130 others were wounded.

UNHCR spokesman Charlie Yaxley said the co-ordinates of the Tajoura Detention Centre on the outskirts of Tripoli would have been known to both the UN-backed government and the rebels who control most of the country.

“It was known that there were 600 people living inside. So there can be no excuse for this centre having been hit,” Mr Yaxley said at the time.

Some of the people who were bombed that day had been intercepted at sea by the Libyan Coastguard as they tried to escape the country and were placed inside the centre.

The Presidency of the Council of the European Union knew of the coastguard’s role and knew it was continuing to put intercepted migrants and refugees at risk.

“After the air strikes, the Tajoura detention centre was closed on July 10 and 482 survivors of the attack were moved to the UNHCR Gathering and Departure Facility (GDF) in Tripoli,” the Presidency’s note says.

“Shortly after being emptied the Tajoura detention centre was again filled with migrants and refugees rescued by the LCG [Libyan Coastguard].”

After the attack the UNHCR and IOM urged the international community to provide humanitarian corridors for migrants and refugees to be evacuated out of Libya.

“For the sake of all in Libya,” the IOM said after the attack, “we hope that states with influence will redouble their efforts to co-operate in urgently bringing an end to this terrible conflict.”

The Presidency’s document says that although the Libyan government agreed to close three detention centres in the Tripoli area, “so far, any concrete planning has not followed this promise.”

Worse, the document says: “Major challenges also stem from the unwillingness of the Libyan authorities to co-operate to enable faster evacuations from the detention centres and to provide safe alternatives.”

“It has proven very difficult, if not impossible, for experts from the IOM and the UNHCR to enter certain areas of Libya.

“The reluctance of officials to co-operate is closely linked to the widely reported human rights violations that take place in the detention centres and to the fact that the facilities form a profitable business model for the current Libyan government.” 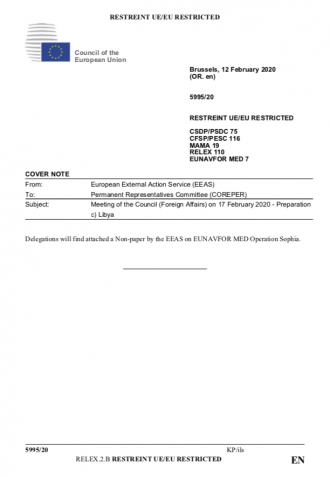 Despite these concerns in September last year, a second restricted document seen by the Star dated February 12, 2020 — this time from the European External Action Service (EEAS) to the Permanent Representatives Committee — confirms that the EU will continue to support the Libyan Coastguard.

The EEAS document was intended to be discussed at an EU Foreign Affairs Council meeting on February 17 regarding the bloc’s scuppered anti-human smuggling naval mission known as Operation Sophia.

Operation Sophia was initially set up in 2015 as a response to the dramatic increase of irregular migration from Libya across the world’s deadliest border.

Though the mission’s purpose was to combat migrant smugglers, it’s thought to have saved the lives of well over 40,000 people fleeing across the Mediterranean. 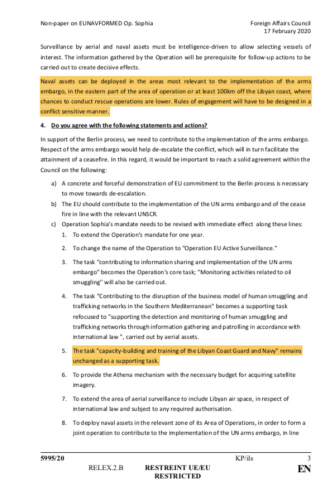 Under pressure from Italy’s far-right then interior minister Matteo Salvini — who erroneously claimed the EU’s boats were encouraging refugees to risk their lives attempting to cross hundreds of miles of water and threatened to veto the entire mission — the EU agreed to pull Operation Sophia’s ships from the sea.

From then on a small collection of NGO ships, frequently referred to as the “civil fleet,” have been the only actors in the central Mediterranean carrying out refugee rescues, while the EU has used Operation Sophia’s aerial assets to co-ordinate with the Libyan Coastguard.

According the EEAS document, Operation Sophia’s core mission will now be refocused to enforcing the UN’s arms embargo on Libya — and contrary to EU foreign policy chief Josep Borrell‘s claims this week that “Operation Sophia will be closed,” the EU will instead rename it “Operation EU Active Surveillance.”

To do that, it stresses, the EU will need to return the mission’s naval assets (ie ships) to the Mediterranean in order to “signal the credible commitment and presence of the EU. Without naval assets, the operational effect and political impact will remain limited, and will be assessed as such by other actors.”

“Objections have been raised by some member states, according to which the re-deployment of naval assets would act as ‘pull factor’ and lead to an increase of irregular migrants entering into Europe,” it says without making reference to studies, such as those by the Italian migrant researcher Matteo Villa, which prove this idea to be a misconception.

“We can predict quite well the number of departures each day if you look at the temperature and the wind,” Villa told the Star last year.

“When it’s cold and windy, you get down to about five to 10 departures [from Libya] each day. And when the weather is clearer then it can go up to 100.”

However, the EEAS document says: “Naval assets can be deployed in the areas most relevant to the implementation of the arms embargo, in the eastern part of the area of operation or at least 100km off the Libyan coast, where chances to conduct rescue operations are lower.”

Finally, towards the end of the document, it says the “capacity-building and training of the Libyan Coastguard and navy remains unchanged as a supporting task.”

On Monday Borrell confirmed at a press conference that the “new” Operation EU Active Surveillance’s ships would be withdrawn if there was any evidence of them acting as a “pull factor” for migrants, leaving the civil fleet as the only rescuers in the Mediterranean.