TURKISH trade unions have accused the government and construction bosses of murder after a worker died on a major building project associated with authoritarian President Recep Tayyip Erdogan.

He was reported to have died of a heart attack, but the cause of death was officially recorded as “infectious disease,” believed by many to have been Covid-19.

Addressing striking workers on Tuesday, Dev Yapi-Is national president Ozgur Karabulut said: “We are mourning him [Mr Oguz]. But we are angry as well. This anger will make our struggle bigger. 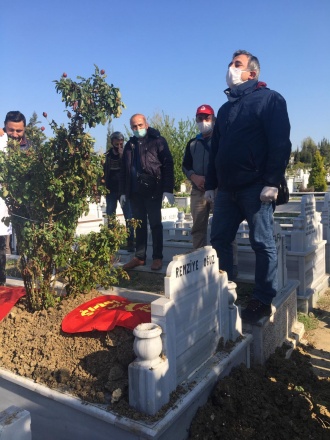 “While capitalism is promoting its ‘stay at home campaign,’ we are working to death on sites. Hasan was murdered. His killer is the greedy company.”

He confirmed that a criminal complaint would be filed.

Turkey is one of the world’s worst countries for workplace deaths, with at least 1,739 recorded in 2019, according to the Workers Health and Work Safety Assembly.

One of the deadliest incidents was the 2014 Soma mining disaster, in which more than 300 people lost their lives. Just weeks before, the government had refused to hold an inquiry into safety at the site.

Construction is notorious for its poor safety record and exploitation of workers.

The $1.7 billion Galataport development is one of Turkey’s most controversial and corrupt projects, according to trade unionists.

In January, protests were held at the Istanbul site after the company withheld wages for three months, owing each worker an average of 15,000 Turkish lira.

Mr Oguz was a well-known trade unionist and lost a lung due to working as a drill operator on a dusty construction site.

He set up union committees, organising workers to protest against unsafe conditions.

But this made him a target for bosses. He was sacked from a World Bank construction project, the Istanbul Urban Hospital, for campaigning on health and safety.

After a lengthy period of unemployment, he found work at the Galataport site. Conditions there were poor and have deteriorated during the coronavirus outbreak, with no protective equipment available for workers.

But nothing changed — workers remained exposed to the risk of Covid-19 and basic health and safety concerns were ignored.

They downed tools again on Tuesday after Mr Oguz’s funeral, which was attended by around 20 trade unionists and his family and friends.

Following the latest strike, bosses agreed to shut down the Galataport site until May 3.