A protester from the communist party-affiliated PAME union wearing a mask to protect against coronavirus, holds a carnation during a May Day rally outside the Greek Parliament, in Athens
×

WORKERS across the world pressed demands for the protection of those on the front line as May Day celebrations were scaled back as a result of the global Covid-19 pandemic today.

General secretary of France’s CGT trade union federation Philippe Martinez said: “This is an opportunity to bear the social demands that we have been defending for a long time and that the crisis has highlighted.”

The country remains on lockdown and the rally traditionally held in Paris was cancelled with people urged to flood social media and join solidarity actions on their balconies.

Far-right leader Marine Le Pen was condemned for defying the emergency measures to lay a wreath for Joan of Arc, whom the fascists have tried to co-opt as a nationalist symbol.

Around 24,000 people have died from the coronavirus in France with unions warning that workers should not pay the price of the “crisis generated by the political choices of a deadly capitalist system.”

The Greek government called for the traditional May Day marches and rallies to be suspended for a week. But demonstrations took place in most major cities in Greece, including the capital Athens with trade unionists respecting social distancing measures in Syntagma Square.

PAME said: “May 1 is a symbolic day in the struggle for the abolition of exploitation. We honour the martyrs of our class. The dead of Chicago, in Greece the dead of May Day 1924, of May 1936, the 200 communists of Kesariani who were executed by the nazis on May Day 1944.”

It called for increased solidarity with health workers and all those on the front line of the fight against the Covid-19 pandemic but insisted that the current crisis was “a reminder of the undeniable truth that the deadliest virus is capitalism.”

At least three people were arrested in the Philippines as small groups of protesters banged on empty pots and held up placards demanding government aid and safe working conditions, defying a ban on public gatherings.

May First Movement labour federation spokesman Jerome Adonis explained that around 23 million people – nearly a quarter of the country’s population – face hunger due to “no work, no pay” provisions in their employment contracts but face arrest for violating quarantine restrictions.

Scores of arrests were made in Turkey, with trade union leaders, including Disk president Arzu Cerkezoglu, violently detained as they made their way to Istanbul’s Taksim Square for a symbolic protest. 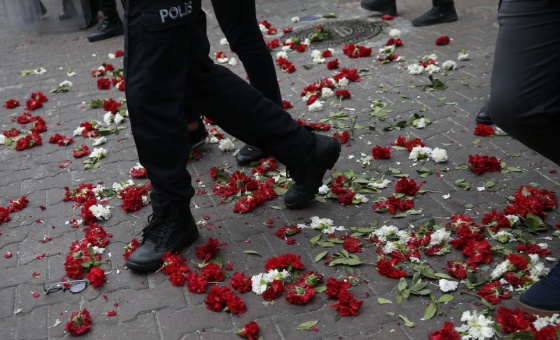