Book Review A wake-up call to the labour movement

A new book advancing the case against the EU is of crucial importance in arguing that its neoliberal structures are irreformable and incompatible with left advance, says JOHN FOSTER

The Left Case against the EU
by Costas Lapavitsas
(Polity Press, £14.99)

COSTAS LAPAVITSAS’S detailed critique of the EU is of immediate importance to all on the left. A renowned expert on the dynamics of contemporary capitalism and professor of economics at London University (SOAS), Lapavitsas was elected as a Syriza MP in 2015. 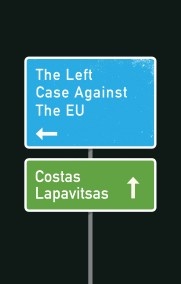 He resigned from the party in protest at the Syriza government’s capitulation to unending EU demands for austerity and its attacks on the labour movement.

The book contains a penetrating analysis of EU economics. However, its strongest recommendation is the author’s own political experience.

Lapavitsas’s conclusion is that the left can never win if it argues within the terms set by the EU, that the EU cannot be reformed and that its structures, including the single market, are fatally prejudicial to any attempt to implement left policies or indeed simply measures that promote industrial regeneration and defend employment of a left Keynesian character.

He warns the Labour Party that the single market “is not compatible with the aim of beating neoliberalism, restructuring the British economy and reducing the power of the City in favour of workers and the poor through a far-reaching industrial strategy.”

Why has the EU taken on this neoliberal character ?

Lapavitsas argues that it was always present. Long before the Treaty of Rome, Margaret Thatcher’s favourite economist Frederick Hayek had advocated a federalist free trade association in Europe as offering the ultimate protection against socialism.

Supranational structures would make it possible to bypass popular pressure on national governments for democratic control over capital.

The same supranational institutions would give legal sanction to the myth that economic well-being demands that markets remain free and supreme even if, in reality, such markets are monopolised and also reflect the monopoly power of some states over others.

Lapavitsas argues that this anti-democratic potential became fully explicit with the Maastricht Treaty of 1992 and the introduction of a single currency. At that time, massive differences in economic power existed across the EU between the great industrial combines of Germany and to a lesser extent the Benelux countries and Sweden and the rest, Greece, Portugal, Spain and even Italy.

Trapped within the single currency, deficit countries could no longer devalue to compete. Nor could their governments use any form of state aid to stimulate industrial redevelopment.

As a result, inequality increased and trade imbalances, financed by German, French and British banks, grew to massive proportions.

The outcome, in 2008-2010, was financial crisis, but it is a crisis that is not resolved. Big capital in Germany and its allies elsewhere remain opposed to any fiscal union that would internationalise these debts across the EU. Why? Because this would rob them of the power to secure further institutional and economic change across the EU.

Here Lapavitsas exposes another and less well-known aspect of German industrial dominance — its reliance on driving down labour costs.

German capital investment in industry has in fact been quite low and the country’s high productivity has depended on a series of strategic reductions in labour costs.

In the 1990s, German industry was able to do this by driving industrial supply chains into Eastern Europe to exploit highly qualified but much cheaper labour. Once this potential was largely exhausted, there was an assault on the domestic labour market.

From 2002 the Hartz reforms ensured, says Lapavitsas, that “the protection of German workers in the labour market was profoundly weakened and wage pressures intensified.”

Where did German capital investment go ? Lapavitsas documents the capital flows and demonstrates that it was used to consolidate monopoly control elsewhere within EU economies. And the same pattern continues today. The drive to reduce labour costs continues in Germany and across the EU as competition intensifies with the US.

This is why German capital and its allies need the bargaining lever of debt and austerity to compel further institutional change and, like all processes that involve monopoly power and exploitation, it is unlikely to have a happy ending.

Lapavitsas urges the left, and especially Britain’s Labour Party, to look this reality in the face and seek instead “a radical internationalism that would draw on domestic strength and reject the dysfunctional and hegemonic structures of the EU … giving fresh content to popular sovereignty and democratic rights.”