A Party With Socialists In It: A History of the Labour Left
by Simon Hannah
(Pluto Press/Left Book Club, £12.99)

A PARTY with Socialists In It is inspired by Tony Benn’s comment that “the Labour Party has never been a socialist party, although there have always been socialists in it” and the book charts the attempts of those socialists to promote their vision over the course of the past 118 years. 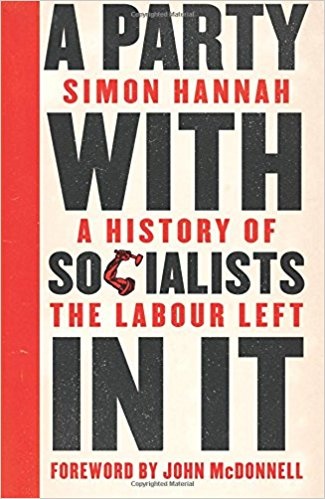 This fight has been taken on by numerous parties, groups and factions, including the Independent Labour Party, the Communist Party of Great Britain, the Socialist League, the Socialist Fellowship, the Young Socialists, Militant and the Socialist Campaign Group. Hannah details how such efforts have in the past been frustrated by “pragmatic” rightwingers who, until recently, dominated the commanding heights of the party.

The author also describes the various Labour governments from the 1920s on, analysing these administrations without rose-tinted spectacles and demonstrating that they tended to be controlled by the right and were focused more on keeping British capitalism happy than on winning meaningful gains for the working class.

Even the much-celebrated Clement Attlee government (1945-51) was generally committed to the capitalist consensus, so its historic gains such as the establishment of the NHS and the building of thousands of council homes were deeply compromised by its enthusiastic support for the creation of Nato and its role in the genocidal war on Korea.

Studying the long and often torturous journey of the Labour left, it becomes increasingly clear that socialists within and around Labour have never been in a better position than they currently are. Previously, even when leftists have held key leadership positions, they have never managed to win control of the party machine and the support of the unions.

As Ralph Miliband bitterly noted in 1983, “the ‘broad church’ of Labour only functioned effectively in the past because one side — the right and centre — determined the nature of the services that were to be held and excluded or threatened with exclusion any clergy too deviant in its dissent.”

Today’s situation is therefore unprecedented. Membership has grown from 150,000 in 2014 to almost 600,000 today and these new members are largely progressive and committed. The party is becoming more democratic and responsive to the membership, unlike in the Kinnock and Blair years, when constituencies, branches and activists were treated with contempt.

Meanwhile, key trade unions have shifted to the left in response to austerity and the betrayals of Blairism. Most unions have therefore thrown their weight behind Corbyn and his team. This is an important development, as the unions have tended to be a force of centrist “moderation” within Labour, resisting the more radical, anti-racist and anti-imperialist views put forward by the likes of Jeremy Corbyn and Diane Abbott.

The surprisingly good showing for Labour in last year's general election has forced most Labour MPs to stop — or at least pause — their attempts to get rid of Corbyn. The left now has a majority on the national executive committee and is establishing its leadership at the constituency and branch levels. For the first time, socialism is becoming hegemonic within Labour.

Crucially, the left also has a large activist base. Hannah makes the important point that Corbyn was well known in the wider progressive movement long before the 2015 leadership election and the camaraderie that had developed between left Labourites and the thousands of anti-war and anti-austerity activists has its roots in the work of the Stop the War Coalition and the People’s Assembly, among other groups and campaigns.

This all adds up to an opportunity that is too good to throw away.

The book would be improved by the removal of a couple of left-sectarian shibboleths — Soviet socialism was “bureaucratised and killed” by Stalin in the mid-1920s, apparently, and the Alliance for Workers’ Liberty was subjected to a “red scare” led by the Momentum leadership around John Lansman.

These notwithstanding, this well-researched history could hardly be more relevant for the political moment we are living through and participating in.

Joe Root: Ben Stokes will put his body on the line for the team

German football plans to have fans back but with a twist

The co-operative ideal is worth defending

There is power in an education union