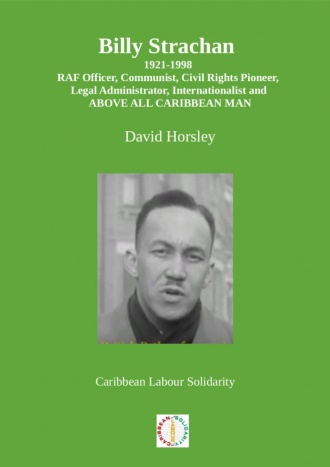 Born in 1921 in Kingston, Jamaica, he came to Britain in 1940 in answer to the call for recruits to fight against Hitler. What he didn’t realise was that he would have to find his own fare to Britain and this he did, travelling on a fruit ship to Bristol from where he made his way to London.

Joining the RAF, he was a trailblazer as the the only black recruit in his unit, eventually ending up as a  pilot with the rank of flight lieutenant.

Becoming a black bomber pilot was a formidable task in Britain during the war, when racist attitudes were endemic but that RAF career was indicative of Strachan — whatever he turned his hand to in life, he was a success.

Newly married, he returned to Jamaica at the end of WWII and it was there that his life changed. Already disillusioned with colonialism and having read and been inspired by Eric William’s Capitalism and Slavery, Strachan met communist doctor David Lewis, who persuaded him that he could do more good in the liberation struggle by returning to England, then at the heart of the empire.

Returning to Britain with wife Joyce and three young  boys in 1947, he immediately joined the Communist Party and for the next few decades was at the centre of communist and Caribbean politics.

He helped to create the London branch of Caribbean Labour Congress and the family home in Kilburn was a meeting ground for left-wing Caribbeans as well as being the starting point for Daily Worker sales and communist activity in the area.

Winston Pinder and Cleston Taylor, two other prominent Caribbean communists who came to Britain in the 1950s, testified to Strachan’s leadership skills. They were all active members of the Communist Party of Great Britain’s West India committee.

Strachan was not only an influence among the Caribbean community in Britain, he was also in regular contact with Chedi and Janet Jagen in Guiana, who both later served as presidents of that country and who set great store by his advice.

He was also instrumental in establishing Caribbean News in 1952, the first black newspaper in Britain to propagate Caribbean independence, socialism and international solidarity, which predated the much more widely known West Indian Gazette started by another Caribbean communist, Claudia Jones.

Despite his numerous activities in communist and progressive organisations, he still managed to raise a young family along with his wife Joyce. He had a full-time clerical job but managed to find enough time to study at home for the law and in 1959 he was called to the bar as a barrister.

His career replicated his earlier achievements in the RAF. He rose to become chief clerk of court, first at Clerkenwell magistrate’s court and then at Hampstead and was elected to the prestigious post of president of the Inner London Justices’ Clerks’ Society.

Given his legal position and the notion of “political impartiality,” Strachan left the party after discussions with other leading communists but remained a strong supporter until his death in 1998.

Strachan, who can only be described as a polymath, was remarkable in achieving so much personally and politically and this pamphlet’s author David Horsley is to be congratulated for the depth of his meticulous research.

In addition to documenting an extraordinary life, it will be of interest to anyone wanting to expand their knowledge of the Communist Party of Great Britain from the 1940s to the 1980s and of Caribbean communists during that same period.