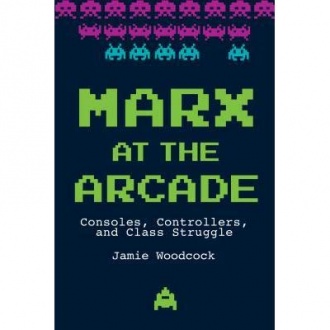 Marx made his video game debut in 2015 in Ubisoft’s Assassin’s Creed Syndicate. And it was while playing through a sequence where one of the villains belittle the game’s protagonist while delivering a monologue on the industrial “miracle” that brought him his cup of tea, that Woodcock realised the vast complexity of the video game industry.

“As I played through this stage of the game, it brought to mind all the different workers and processes that must have come together across the world to allow the player to enjoy this 'miracle.’

“The video game, like the cup of tea, requires a complex global supply chain and different kinds of labour to ensure the final object can be consumed by the player.”

Woodcock goes on to quantify the truly astonishing scale of the video game industry and the billions of pounds it pours into the British and US economies each year.

An example is Rockstar North’s Grand Theft Auto V, the most financially successful media product of all time. Estimated to have sold over 90 million copies worldwide since it was released in 2013, it’s made in excess of $6 billion in global revenues.

No wonder then that video games have moved beyond a niche pursuit and become “something the political representatives for the UK’s ruling class see as integral to capitalism,” Woodcock comments.

He lays bare the truly awful and precarious conditions such capitalism has subjected most workers in the industry to. Mass layoffs, excessive and unpaid overtime — known as crunch — sexism and sexual abuse and a whole host of other problems are all widespread.

The prevalence of non-disclosure agreements which workers are required to sign is an obstacle to uncovering how the games are made. They also serve to block workers from talking about the games they’re working on and discussing how the company works and therefore how they treated as workers, Woodcock says.

One of the book’s highlights is how Woodcock views crunch — a deliberate ploy proving how management utterly disregards the wellbeing of its workers — from a Marxist viewpoint.

But it’s not all doom and gloom. The sections on how trade unionism is spreading among the exploited workers — the founding of the Game Workers Unite union being an example — is especially interesting.

In the book’s conclusion, Woodcock provides a Marxist critique of the act of playing video games and uncovers a disturbing and increasingly close link between the first person shooter genre and the military-industrial complex.

Video games have already caught the attention of the capitalists and it’s high time the left took notice of this cultural phenomenon.

Getting your hands on Marx at the Arcade is the best place to start.