WITH fake news and alternative facts now ruling much of the airwaves, a historical account of “counter-factual possibilities” may not appear as fanciful as it would have done in the past. 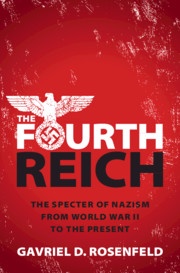 That’s demonstrated in this book by Gavriel Rosenfeld’s, a survey of the various yet so far unsuccessful attempts to launch a Fourth Reich to succeed or replace Hitler’s short-lived failure with his 1,000 year Third Reich.

It helps in the understanding of how we’ve arrived at the present situation and how easily it may have been frighteningly different.

Immediate post-war efforts by defeated nazis, ranging from the Werewolf resistance movement to a series of planned coups to overthrow or infiltrate the German Federal Republic established by the Western powers, were unsuccessful, largely owing to their being upstaged by West German chancellor Konrad Adenauer’s inclusion of substantial numbers of ex-nazis in his government and his policy of “amnesty and amnesia” towards the past.

The general fears of a nazi revival dwindled as the so-called German economic miracle took hold. Yet they reawakened and faded in waves throughout successive developments, such as the hotting up or cooling of the cold war.

And they significantly increased with the 1990 reunification into a greater Germany and its subsequent hegemony over the European Union.

Rosenfeld traces these patterns of concern through popular culture, with numerous novels and films and even comic books depicting secret societies of ex-nazis planning the next round of world domination.

These were often set in South American countries that had harboured those like Adolf Eichmann, one of the main architects of the Holocaust, who had escaped justice at the Nuremberg war trials.

Apart from universalising the term Fourth Reich, this “aestheticisation” also had the result of devaluing the concept and its true historical meaning by encouraging a lurid fascination with the perpetrators rather than the victims.

The thrust of Rosenfeld’s argument takes on extra poignancy when we see the far-right shift throughout Europe today.

In Germany, the rise of the Alternative fur Deutschland party (AfD), hinting at the illegitimacy of Angela Merkel’s Federal Republic, and Pegida (Patriotic Europeans Against the Islamisation of the West) sporting the Fourth Reich flag, along with support from elements in the media, clearly indicate that the spectre of fascism can reincarnate whenever capitalism is beset by one of its ever more frequent crises.