IN RECENT times, there’s been a welcome resurgence of interest in the novels of inter- and post-war leftist Jewish writers.

London Books has been leading the way with the revivification of the reputations of the likes of Gerard Kersh and Simon Blumenfeld and now Five Leaves Publications is focusing on the no less impressive output of Alexander Baron.

Baron’s life seemed to mirror that of many second-generation British Jews. Radically left-wing in the 1930s — he edited Challenge, the magazine of the Young Communist League — he went on to front-line military experience in the second world war and thereafter a move into social observation before ending his working life as a scriptwriter on TV adaptations of classics such as Oliver Twist and Vanity Fair in the 1980s.

Novel-wise, he is probably best known for From the City, From the Plough based on his D-Day experiences and his study of the Jewish criminal underworld in The Lowlife.

On the downside, The War Baby is a clunky, sub-Orwellian attack on communists during the Spanish civil war. 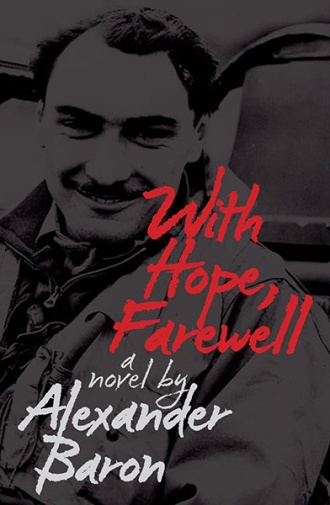 With Hope, Farewell is a far less well-known novel but it could well be Baron’s best. Its main protagonist is Mark Strong, whose whole life is hedged in by the accumulating misery, sometimes only vaguely acknowledged, of anti-semitism.

Baron is masterful in recreating the experiences, hopes, successes and even rivalries of working-class Jewish families.

We first encounter Mark as a young boy holidaying along the east coast. His hyper-tense mother is on the lookout for anti-Jewish sentiment and finds it everywhere, including from their landlady, and most devastatingly from a family Mark and his brother have recently befriended.

The only redeeming aspect of the holiday is when Mark secretly pays to be a passenger on a stunt aircraft for a few minutes of freedom.

This metaphor of the sky as both a place of danger but also liberation returns in later chapters during Mark’s exploits as a Hurricane pilot.

In the desperate fight against nazism, the wartime RAF cannot afford to marginalise any skilled pilot and Mark’s experiences of the universal comradeship and acceptance are a literal and metaphorical high point in the book.

In contrast, his post-war life presents a terrible falling back to earth. Mark’s earlier heroism is rewarded in low-status and precarious employment and the re-emergence of the fascist menace in the neighbourhood of Dalston where he and his wife Ruth have taken up residence.

The terrible consequences of a clash between the fascists and their opponents directly affects Ruth, causing Mark to unleash years of frustration at how he’s been treated by a society indifferent to anti-Jewish bias.

Baron is one of the most eloquent describers of collective and individual emotions during times of great change or pressure. He effortlessly marries humour with pathos, whether that be a Jewish wedding interrupted by the victim of a fascist drubbing or Mark’s efforts to impress a girlfriend that are interrupted by his spivvy uncle Sid.

His is a scintillating and adept literary voice which deserves to be far better known.

With Hope, Farewell is published by Five Leaves Publications, £9.99.