BOOKS Message from one crisis generation to another

An account of the US literary scene during the 1920s and 1930s economic slump is a valuable source of reference for cultural practitioners today, says JUSTIN THEODRA

The Deep End: The Literary Scene in the Great Depression
by Jason Boog.
(OR Books, £16)

GOING from success to success, with no intimation of the failures in between, literary histories are somewhat akin to CVs. 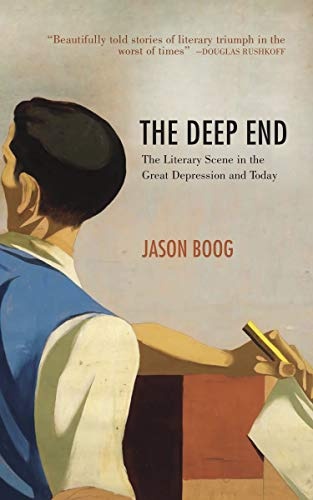 In The Deep End, Jason Boog challenges that “destructive tendency to hide failure,” by exploring the lives and works of nine writers who survived the Great Depression in the US, arguing that these writers can teach the contemporary “crisis generation” much about seeking help and, ultimately, organising for change.

Boog sandwiches his nine substantive chapters between an introduction and conclusion focusing on two contemporary social movements in America — the Green New Deal and the Sunrise Movement — and there is also a chapter on the crisis generation taken as a whole and numerous interludes. They make for dynamic reading.

But, he argues, writers who admit failure are best able to bounce back artistically. Cornell Woolrich only became “king of pulp fiction” after he admitted that high fiction was dead in the Depression era. And Edward Newhouse’s best book grew out of his lived experience in Hoovervilles and tent settlements.

That admission of failure is the first step towards organising for change, Boog contends. In publicising his trips to the welfare office, Maxwell Bodenheim became a symbol for writers across the country, galvanising them to join the Writers Union, while Heywood Broun shared his story of job loss with others and helped organise the New York Newspaper Guild.

Yet, despite demystifying failure, Boog fails to redefine success satisfactorily, conflating it with a refusal to surrender. He hopes that this generation is remembered as one that “made noise while it drowned” and claims that if there is one lesson to be taken from the previous crisis generation it is that “they did not surrender.” Such conclusions belie defeatist tendencies — we can do much more than simply fight on.

Perhaps because of that defeatism, Boog falls prey to social democratic illusions. While warmly reviewing the Green New Deal in the book’s introduction, he acknowledges that a deregulated financial universe cannot even sustain the much more modest revamped Federal Writers’ Project (FWP) and he “dreams” of working for a reconstituted Works Project Administration without indicating how it can be prevented from being rolled back in the absence of a workers’ government.

Social democratic solutions do provide hope. But they also channel anti-capitalist sentiment away from revolutionary change. Nevertheless, Boog makes excellent use of historical analogy to demonstrate that contemporary writers are heading into an “economic vacuum” of the same order as the Great Depression.

Delineating the deleterious impact of monopolistic competition on prices, he highlights how digital books are being used in contemporary price wars like bestsellers were in the 1930s.

And he notes how contemporary attacks on the National Endowment for the Arts mirror those launched against the FWP, signposting the decline of federal arts patronage.

Using historical analogy to highlight the economic roots of contemporary cultural decadence, he compares American Idol to the marathon talk competitions Kenneth Fearing criticised in his poems and points out the similarities between Napoleon Hill’s ideology of “manifesting riches” and those of today’s self-help gurus.

While Boog’s defeatist tendencies and social democratic illusions leave something wanting, his demystification of failure, poignant use of historical analogy and incorporation of personal anecdote make this a refreshingly honest, and incisively well-informed literary history of the Depression era.

It’s a must-read for contemporary writers interested in radical change.

Eight wounded in Jerusalem’s Old City, a week after 49 killed by Israeli shelling on Gaza