INTERVIEW ‘My belief in literature, in its transformative power, is unshakable’

Renowned Turkish writer ASLI ERDOGAN talks to Daniel Beaumont about her experiences of prison, life in exile and the consolation of writing

AS WELL as in her native Turkey, Asli Erdogan is well known in Europe, where her works have been translated into English, French, German, Spanish, Italian and Portuguese.

She’s won numerous international literary prizes and is prominent for her human-rights activism, both in Turkey and elsewhere. Though awarded the Simone de Beauvoir Prize two years ago, her works are no longer being published in her native land and it’s only in France that all of them have appeared in print.

At present, Erdogan lives in exile in Berlin where she is battling an auto-immune disease. A charge of “the destruction of the unity of the state” hangs over her head — she was on the advisory board of Ozgur Gundem, a newspaper with links to the outlawed Kurdistan Workers Party (PKK) — and was acquitted of the charge more than three years ago. But it was reinstated this year.

Asked about how the situation has changed for her and other dissident writers since 2016, she says: “We are either in prison or out of Turkey’s borders. All my friends in Turkey have either left or have been arrested, those who are not currently in jail cannot leave because of an imposition of a travel ban.

“I meet more people here in Berlin who are in exile, than I used to meet in Istanbul,” she confides, “journalists, academics, musicians, rap singers, film-makers.”

She believes that the situation is far more drastic than the foreign press presents it to be. On average, 40,000 people have been arrested on political charges every year in Turkey since 2016.

She considers herself lucky to have been arrested early on in 2016. Nowadays there is almost no-one left to raise a voice [in protest] and the conditions in Turkish prisons are horrifying.

And, as the number of the victims increases, people develop a “crust” — they lose their sensitivity and empathy, while human tragedy becomes an old-fashioned, much-repeated story. Fear makes most people identify themselves with power, not with its victims.

“The human soul, as we all know, is difficult and unreliable material,” she asserts. Occasionally, though, a relentless fight for freedom by someone emerges somewhere.

“The arrests have continued in full force during the pandemic. Imagine being in an eight by eight-metre cell with no running water or toilet in the basement of a police station — that’s how I was kept throughout my entire custody with four or eight other people.”

She was horrified to read about one case when someone arrested was Covid positive. The prisoners have little or no access to healthcare and yet the authorities are totally silent and secretive about the spread of the virus among prisoners.

Erdogan was acquitted on February 14 this year after a three-and-a-half year trial. The Italian translation of her The City in Crimson Cloak was published two weeks later, while the Spanish version of The Stone Building and Other Places was due out early in May and her book of prose poetry, Requiem for a Lost City, was scheduled to appear in France in June.

She confesses she began to breathe again. “I finally had a chance to go back to writing, or to life — they are synonymous for me. Alas, the pandemic came. The City in Crimson Cloak lay dormant on the bookshelves of Milan's closed bookstores, the Spanish publication was postponed. But Requiem became my best-reviewed book in France.

“The pandemic trapped me in Berlin,” she says, “and then doctors discovered that I have a very rare and nasty auto-immune disease. I had to have two operations but nothing could be done to reverse the damage sustained to the lungs and heart.

“I cannot tell the horror of being diagnosed with such a disease in the midst of a pandemic. And to be in exile, to realise you can never return, not even for a final farewell, the tragedy is beyond words and should remain so.”

Turkey’s president Recep Tayyip Erdogan has almost become an expert in creating a war atmosphere every time his popularity decreases. And it is very disheartening to see that each time this deadly game succeeds, she says.

Her duty is to all imprisoned, actually or metaphorically — and to tell the truth that they cannot tell themselves. Since her first book The Miraculous Mandarin, the story of a one-eyed woman, she says her “writing revolved around themes of absence, void and hurt and my search has been how to tell the essentially untellable.

“Can literature go inside the torture chamber or gas chamber and still remain literature? No-one can answer that.

“Unfortunately, my deteriorating health left me in the state of a hunted animal, only trying to stay alive. Maybe this obsession with life or staying alive is what I have to get rid of to be able to enter the Stone Building [of the book title], one more time, infinite times more.”

When she was arrested on a Friday night around 11pm, she was put in a cell in solitary in which, she later learned, a young Russian prisoner had hanged herself on her very first night inside.

“The ghost of this 24-year-old woman whom I had never met has haunted me ever since,” she says, and she has now completed the story of the suicide Esmeralda in Bakirkoy Prison. The protagonist is, like Erdogan, a classically trained ballet dancer.

She can no longer publish in Turkey as her publisher, a former a member of parliament for President Erdogan’s AKP party, refuses to reprint her books and has now taken her to court for trying to publish with another publisher. She finds some consolation in the new translations of her books and the reviews they get.

Recently, The Stone Building and Other Places — four linked stories about enforced isolation, persecution and post-trauma survival — has been translated into Kurdish by a poet and political prisoner and the earnings from sales will go to assist the publication of books by political prisoners.

Asked about her future she says: “Future is a word that stopped resonating for me a long time ago. I do not really need hope but my belief in literature, in its transformative power, is unshakable.

“Literature as a mirror,” she declares, “has long been shattered. But some of us will always keep groping among the broken glass, searching through the dreams of a mirror long turned into sand, for a grain of truth only a bleeding hand can grasp.”

The City in Crimson Cloak and The Stone Building and Other Places are available in English. This is an edited version of an interview which appeared in Counter Punch, counterpunch.org 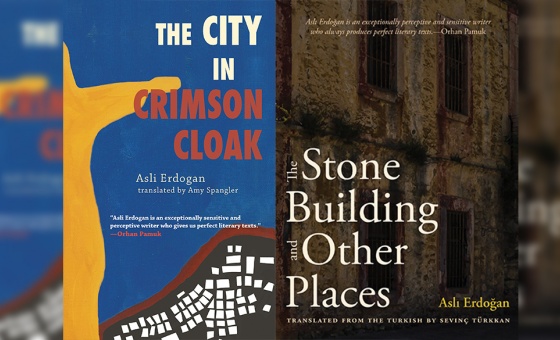 Rabbi attacked outside of synagogue in Essex ‘needed hospital treatment’