STEWART HOME’S first novel in six years sets off on a familiar road as its protagonists — Martin Cooper, a fifty-something ex-anti-fascist skinhead and his girlfriend Maria Remedios, a drugged-up Spanish head-case in her forties — flit around trendy parts of inner north London exploring their interests in punk, the occult, horror and deviant sex. 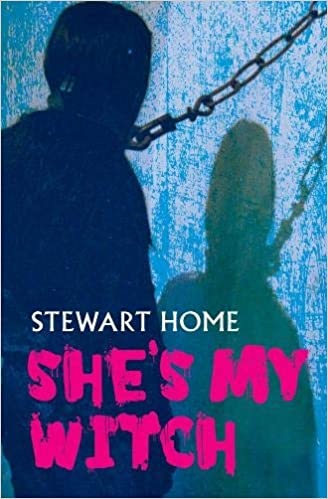 But compared with any normal outing on the filthy, belching Home charabanc, this is a restrained ride — one that’s unlikely to induce too much queasiness and which offers rewards at its destination.

While the sex, as usual, is determinedly unsexy, much of the deviancy is confined in quite coy fashion to the unfulfilled fantasies of the two main characters, who often settle for a kiss and a cuddle rather than any exchange of bodily fluids.

Martin and Maria are imbued with likeable vulnerability and although their infatuation is, in typical Home fashion, rather transactional, one might even call this a proper love story.

So has the author of Slow Death, Cunt and Blow Job gone soft?

Not likely. Although She’s My Witch feels subtly different from many of Home’s other offerings, it possesses all of the dark, minimalist touchstones of his previous work and there’s always that familiar feeling that you’re missing out on something that’s going above your head.

Didactic, autistic, maddeningly and humorously repetitive, mixing real-life people and places with imagined events, it’s ruthless in its portrayal of two self-obsessed modern people, lost both in the unreality of social media and the inward-looking focus of their real-life existence.

While the long-suffering and relatively stable Martin has a slightly messy life that’s hardly well sorted, Maria’s is far more worrying, with various dark clouds looming behind her that one expects to break over the relationship at any time.

Yet as they continue on their monotonous way — meeting at bars, sipping coffee, discussing tarot cards and having sex in public places — gradually the reader comes to feel that this is a real, potentially lasting partnership.

Whether the odd couple make it to the end is another matter altogether and Home uses all his skill to keep us holding on for the outcome.