INTERVIEW 'There's nothing broken that we cannot fix'

Times may be hard but, as EFA SUPERTRAMP tells Susan Darlington, her new album is all about seeking out the political positives

EFA SUPERTRAMP is perhaps best known to many as half of electronic-punk outfit Killdren, who found themselves in the middle of a media storm for their song Kill Tory Scum (Before They Kill You).

The track, which saw the duo dropped from last year’s Glastonbury lineup, proved to the London-based 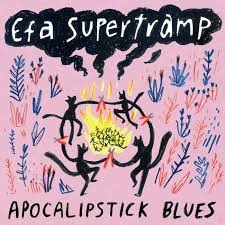 musician that music still has the power to shock. But it came as a surprise, she says, “because you think everything’s been done.”

And she found it ironic that people were upset by it given “how offensive everything is in society anyway.”

That anger at the political mainstream infuses her parallel career as a self-styled “acoustic folk-punk grrrl.” The Welsh-born musician’s bilingual second album Apocalipstick Blues, mostly recorded with just guitar and her raspy voice, continues in the same vein the socially conscious storytelling of Billy Bragg — probably the most famous acoustic punk — and Beans On Toast.

Coming five years after her debut Rhyddid Yw Y Freuddwyd (Freedom is the Dream), during which time she lost the material for an album, lockdown finally forced her to stop touring and focus on completing tracks.

They’d been in progress for a long time but she’d wanted to wait until she was in the right mental space to convey a sense of optimism. “If you’re thinking about politics, it’s really important to project hope for the future,” she says.

She achieves this through rousing soundbites that remind listeners that no matter how dire things seem, change is possible. As she sings on Keep Looking: “There is nothing broken that we cannot fix.”

Music is something that can lift you up and “it can definitely save lives. One of the best things when I go on tour is when people tell me that my songs have helped them keep going.”

This positivity is embedded in tracks that variously reference refugee rights, the Rojava revolution, the Windrush scandal and the class system. These are frequently rooted in the lived reality of activism, with How Far? sampling an Angela Davis speech and Prosecco Punx featuring an audio clip of a Black Trans Lives Matter protest she attended in London.

She’d questioned whether it was right to attend a demo in the middle of a pandemic but rationalised it was important to stand with some of the most marginalised people in society. And she was also reminded of the punk adage that “all the struggles are connected, all the oppressions are connected. We have to stick together and we have to try to empathise with other people’s situations.”

Recording at home, without the pressure of paying for studio time, benefited the topicality of the material. Produced by Killdren bandmate Nick Ronin, it was an enjoyable learning curve for both, and working where you live “makes music more democratic in a way because everyone can participate in it,” as long as you have a computer and a microphone.

Sites such as Bandcamp also create a more direct link between the artist and the listener, essential for an artist who prides herself on being self-funded, especially at a time when she is unable to tour and promote her new record through traditional routes.

Rather than be downbeat about this, she thinks she was lucky to be in a position where she could utilise lockdown “to get creative and finish the product.”

And she’s positive that out of the political and social turmoil created by the pandemic there will be change. “We’ve taken a step back but hopefully we can take two steps forward. At the grassroots, there’s really good things happening and good ideas being shared.”