THE Morning Star is sad to announce the death of anti-fascist Max Levitas, who passed away peacefully today aged 103. 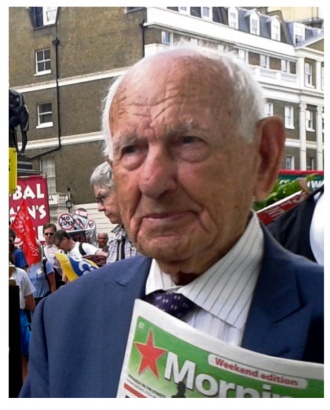 Jewish communist Mr Levitas was a veteran of the Battle of Cable Street, where the Communist Party and Jewish community of London’s East End routed Oswald Mosley’s British Union of Fascists in 1936.

The son of Jewish immigrants from Lithuania and Latvia who had fled the anti-semitic pogroms of tsarist Russia, his example inspired generations of anti-fascist activists and he will be sorely missed.

His niece Ruth Levitas noted that Mr Levitas was “Dublin-born and deeply proud of his Irish as well as his Jewish roots” and that he was “an indefatigable campaigner against racism and fascism to the last. His last conversation this morning with his nephew Ben was about the upcoming march on November 17.”

Labour leader Jeremy Corbyn, who spoke alongside Mr Levitas at the 80th anniversary of Cable Street in 2016, said he was “deeply saddened by the passing of my friend Max Levitas.

“Max was one of that wonderful generation that helped to defeat fascism in the 1930s.

“All communities take strength in how Max, a proud Jewish socialist, stood up to the fascists at Cable Street.”

And Communist Party general secretary Robert Griffiths expressed “great sadness at the passing away of our dear comrade Max Levitas at 103, the oldest and longest serving member of the Communist Party.

“Max served the people throughout his life, as a veteran defender of the East End of London against Mosley’s fascist Blackshirts and as a Communist councillor.”

The funeral will be private, but a memorial event will be announced in due course.