The Colombian connection: US imperialism and Venezuela

ON May 3, armed combatants arrived from Colombia to take prisoner or assassinate leading figures of Venezuela’s left-wing political leadership, including the country’s president, Nicolas Maduro.

Launched from Colombian coastlines regularly patrolled by the Colombian navy and close to a US military and navy base, the mercenaries invaded Venezuela with heavy weaponry and satellite technology — such satellite technology facilitates secure communication with intelligence operatives, employed systematically by the US and Colombia in their counterinsurgency operations against left-wing Colombian rebels.

According to one of the leaders of the mercenary group, Jordan Goudreau, a veteran of the Iraq and Afghanistan wars and the owner of a private “security” company in Florida — where scores of wealthy right-wing Venezuelans have emigrated — the invading group numbered around 60 combatants and organised itself inside Colombia, although there were certainly many more people involved than this. The group also included, by the admission of Goudreau, former members of US Special Forces.

One of the mercenaries admitted being a member of the Drug Enforcement Agency (DEA), an intelligence and security organisation with extremely close links to Colombia, and several mercenaries wore uniforms bearing US insignia. On top of this, Colombian navy boats were apparently used by the invading group.

Goudreau suggested that the camps were located along the Colombian-Venezuela border — but this is surely disinformation. Colombia’s left-wing National Liberation Army (ELN) and Farc-EP (the armed splinter group of the now legal political party Farc), control the rural areas along Colombia’s border with Venezuela. 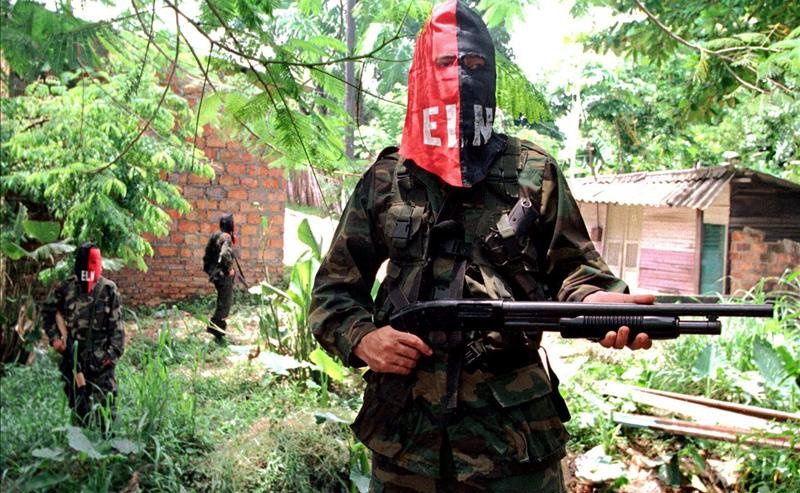 They employ deep-rooted intelligence networks, civilian militias, and armed guerrillas — so there would simply be no opportunity for these mercenaries to establish their camps along the border, especially given that the ELN and Farc-EP are passionate supporters of Venezuela’s government. Goudreau is clearly trying to conceal connections between Colombia’s state and the mercenaries.

It is much more likely that the invading force benefited from links with Colombia’s state and security apparatus. Colombia’s state has provided funding, training, recruits, weaponry and intelligence, logistical support, as well as international protection, to Colombian-based paramilitaries for decades, and precisely for the purpose of targeting the political left militarily. With such experience behind it, Colombia serves as an ideal “staging ground” for organising paramilitary incursions into Venezuela.

This is also not the first time Colombia’s state has co-ordinated with paramilitary forces against Venezuela’s socialist government.

Repeatedly over the years, state-sponsored paramilitaries have used Colombia as a staging ground to invade Venezuela, including trying to assassinate Hugo Chavez, Venezuela’s former president who died in 2013.

With Chavez accused of supporting Colombia’s left-wing rebels, Colombia’s dominant classes have always held a special grudge for him and the socialist project be led.

By doing this Colombia can claim “plausible deniability” for what are essentially concealed invasions of Venezuelan territory by another nation-state and avoids being condemned internationally.

Colombia has previously violated international sovereignty. Using the rhetoric of “fighting terrorism” while publicly defended by the United States, in 2008 Colombia’s state flouted international law by killing Raul Reyes in Ecuador: Reyes was a leader of Farc — described by Chavez as a “good revolutionary” and victim of a “cowardly assassination.”

For decades, Colombia has been the strongest ally to the US in the region. In 1964 and against peasant self-defence collectives formed in reaction to landlord-sponsored violence, according to academic James Brittain, the Colombian state permitted the gringos to “try out” napalm before it was used in Vietnam.

Colombia was also the only Latin American nation-state to join the US forces as they invaded Korea in 1950 — a point which Colombia’s military today is proud to highlight in its national museum.

Not long after the election of Chavez in 1999, Colombia’s state signed the multi-billion-dollar US-sponsored military initiative “Plan Colombia” — this was largely to counter left-wing insurgency threatening US interests, but also because Venezuela — with some of the largest oil reserves in the world — sought to distance itself politically and economically from the US’s dictates.

The initiative made Colombia the third-largest recipient of US aid in the world — after Israel and Saudi Arabia. Plan Colombia gave the US military and intelligence extensive rights to use Colombia’s territory as it pleases, while upgrading Colombia’s security capabilities to the point where it has the most advanced airpower and intelligence capabilities on the continent. US and Colombian security forces collaborate on a systematic basis.

Such military aid inevitably involved a “price.” Colombia’s economy has been opened up to US transnational corporations and more than half the country’s GDP is based on foreign direct investment (again, largely US-capital). A “free-trade” agreement is in place containing clauses which strategically protect US business, but not Colombia’s.

Today Colombia’s territory serves as a giant US military base on which to attack any Latin American country. Bordering five nation-states and facilitating effective access to the Central American states and the strategically important Panama Canal — the alliance with Colombia provides the US with the capabilities to project its military power rapidly across the whole landscape of Latin America.

The US currently benefits from at least seven military bases in Colombia — including one positioned along the Venezuelan Apure border. These bases have all been installed since the election of Chavez as president in 1999.

Interestingly enough, the US military base along the border is located very close to one of Venezuela’s large oil deposits, not to mention Colombia’s second largest deposit — known as the Cano-Limon pipeline. The US and Colombia have jointly established military task forces dedicated to protecting the Cano-Limon pipeline — the property of US oil multinational Occidental Petroleum.

More recently, the US has established the Venezuelan Affairs Unit (VAU) in Colombia’s capital city, Bogota, located in the huge US embassy. This so-called “diplomatic office” is openly dedicated to supporting the US’s favoured Venezuelan opposition forces. 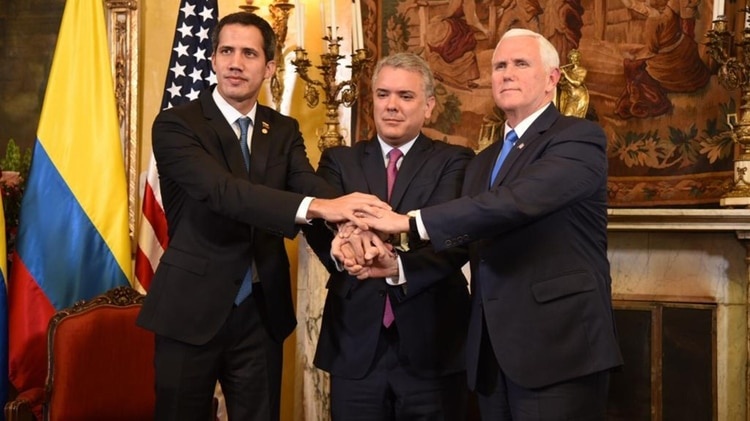 Normally Venezuela’s largest trading partner, Colombia’s state has blockaded the border to Venezuela and severed trade relations. Colombia’s Navy, constantly scouting the rivers all along the frontier, is instructed to prevent goods being bought from or sold to Venezuela. In other words, Colombia is pivotal to the US’s current strategy aimed at strangling Venezuela into submission.

This is very cynical, given that it was Colombia’s armed forces who only last year facilitated the US “aid” trucks as they attempted to cross the border into Venezuela. A tactical manoeuvre targeted at legitimising the US and Colombia’s favoured Venezuelan opposition leader, Juan Guaidó, Colombian support for these trucks was less about providing aid and more about sponsoring opposition to Venezuela’s government. 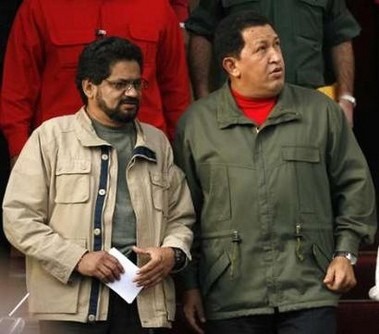 Iván Márquez, the current leader of FARC-EP, with Hugo Chavez in 2007

And Richard Branson — the British-born billionaire who enjoys significant investments in Colombia and would certainly prosper from regime change in Venezuela, organised the “aid concert” on Colombia’s border as part of those efforts to undermine Venezuela’s socialist government. Virgin mobile Colombia is one of the largest mobile network providers in the country.

Amidst all this, it is important to remember that US initiatives to overthrow the socialist government in Venezuela long predate the election of Nicolas Maduro in 2013. Apart from backing the 2002 coup against Chavez, classified intelligence documents revealed by Wikileaks show that the US had a five-point strategy at least from 2004 for undermining the government in Venezuela.

This strategy was detailed in the secret cables as: “1) Strengthening Democratic Institutions, 2) Penetrating Chavez’s Political Base, 3) Dividing Chavismo, 4) Protecting Vital US business, and 5) Isolating Chavez internationally.”

During the course of all these actions, Colombia’s state and territory have served as a strategic platform and vanguard on which to turn Venezuela into a puppet relegated to the Yankees’ “backyard.”

Oliver Dodd is a PhD candidate in Political Economy at Nottingham University and is researching Colombia’s legacy of class struggle, as well as the country’s (counter)insurgency and peace-making experiences. He can be followed on Twitter @OliverCDodd. 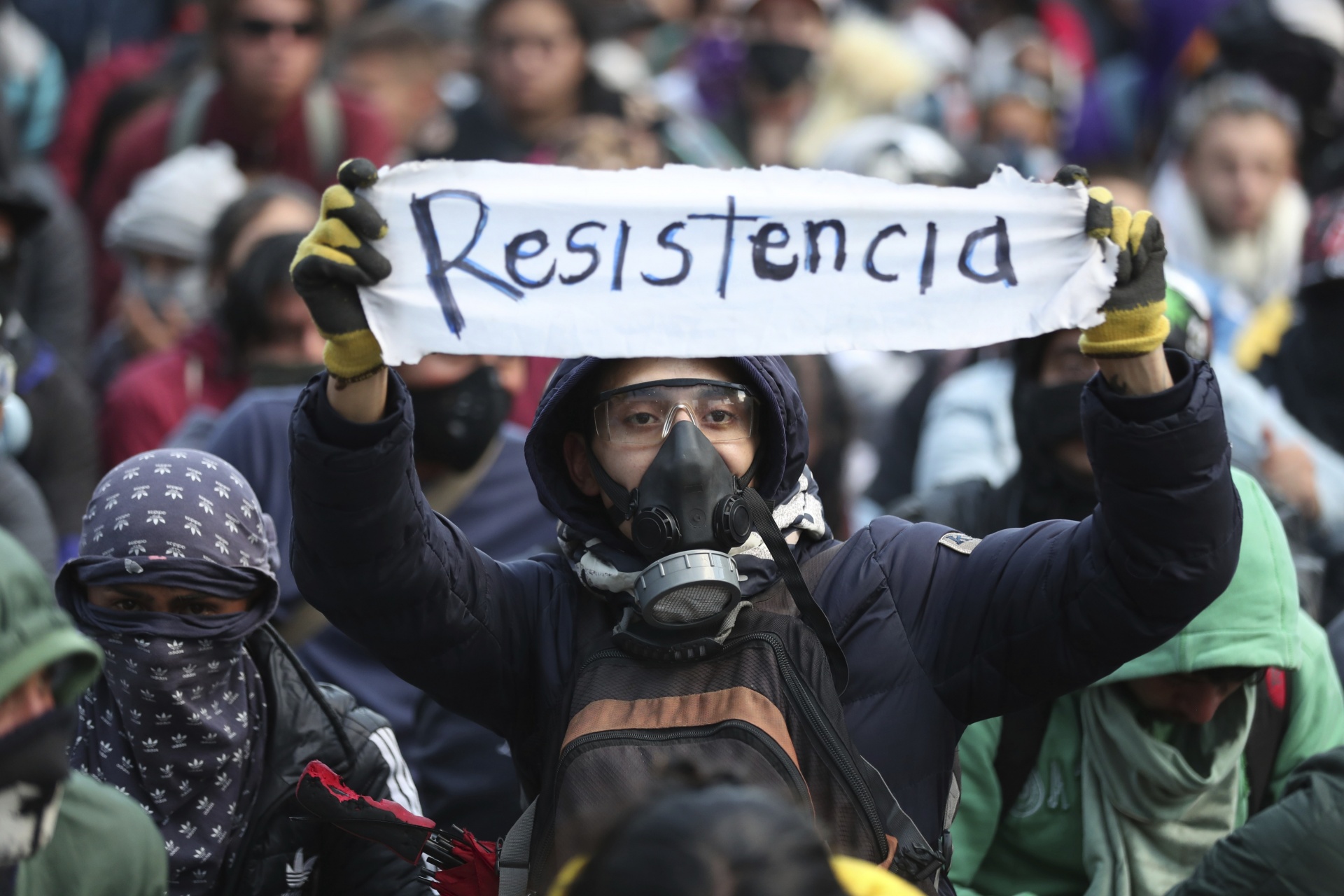