‘Obrador has launched an austerity programme, laying off thousands of public-sector workers’

MEXICO CITY — The new social democratic government of Andres Manuel Lopez Obrador is providing a breathing space for the capitalist class in Mexico where there is widespread social unrest and disenchantment with the status quo, said Pavel Blanco, leader of the Mexican Communist Party (PCM).

The Obrador government, posing as left wing to attract votes and support, differs little from previous right-wing governments and is committed to the neoliberal capitalist model that has led to mass poverty and unemployment, said Pavel, 46, in an interview in the party’s downtown Mexico city office.

“Obrador has launched an austerity programme, laying off thousands of public-sector workers and cutting programmes,” he says.

Using the pretext of clamping down on corruption, he is privatising the country’s system of national publicly owned day-care centres, as well as cutting healthcare, education, cultural and scientific research budgets.

Pavel says that Obrador, who has declared himself a supporter of the free market, signed the revised Nafta (North American Free Trade Agreement ) 2.0 agreement last year with the US and Canada that continues to hurt the working class in all three countries and benefits US, Mexican and Canadian multinational corporations.

The new Mexican president wants to establish two new free-trade zones where foreign corporations do not have to adhere to Mexico’s weak labour laws and workers will have no rights.

Those receiving the scholarship will be placed in companies and public agencies where the government will pay their salaries for two years, $190 per month, less than what regular employees are paid, a gift to business paid for by austerity measures.

“These young workers will have no labour rights or benefits and can be forced to work 9-12 hours per day.”

In a country with at least 20 per cent unemployment, Pavel said that this programme will lead to abuses and exploitation.

“The new government has raised the daily minimum wage by 36 pesos — from 88 to 102 pesos ($ 5.1) but this is not enough to cover expenses and wages continue to remain low.”

Pavel says that purchasing power from 1970 to 2019 fell 70 per cent, resulting in mass poverty. According to Mexican government figures, 61.1 million (out of a population of 120 million) have incomes below the official poverty line.

The new government has introduced labour legislation that will allow more than one union in a workplace. It will divide unions and allow the entry of corrupt unions from the AFL-CIO.

Pavel says that people close to Obrador are creating a new trade union federation to control the country’s labour movement.

“Obrador says the main thing holding Mexico back is corruption and dishonesty, but the main problem is exploitation,” he says.

Pavel says that Obrador’s economic programme will do nothing to eliminate poverty and destitution in the country.

He is also critical of the National Gaurd, the new paramilitary force that Obrador set up to fight widespread crime and violence.

“The purpose of the new force is to control and repress dissident, not to fight crime,” said the Communist leader.

“You see that by the type of equipment they are given, such as helmets and shields.” Obrador says that he will no longer recognise social protests, just individual demands.

At the request of US President Donald Trump, the Obrador government is impeding, detaining and sending immigrants back to Central America.

In the past, Mexican governments always allowed poor Central American immigrants to pass through the country, says Pavel.

Pavel says that Obrador does not come from a left-wing background. “While his grandfather used to be a Communist Party member, Obrador belonged to the right-wing Institutional Revolution Party (PRI) before he began his political career with the centre-left Democratic Revolution Party (PRD) in 2000.”

In 2012, Obrador broke with the PRD and formed the National Regeneration Movement (Morena) under which he was elected president.

The PCM formed a brief alliance with Obrador, along with other left parties and groups, when he ran for governor of Mexico City in 2000 around a minimum reform programme, says Pavel.

The PCM is currently trying to get registered so that it can enter the electoral arena and provide a left-wing alternative for the working class, says Pavel, who believes the party has support among the population.

It has been an uphill struggle because the country has the most restrictive electoral laws in the world, designed to maintain the political monopoly of the existing parties.

“The National Electoral Institute (INE) is demanding a list of 3,000 members in each of the 300 electoral districts, and the signatures of 1 per cent of the voters list, impossible demands for small parties like the PCM to meet,” he remarks.

“The demand that the party provide a membership list to INE is unacceptable because it would put members’ lives at risk. Over the last few years five leaders of the PCM have been assassinated and one disappeared for their activism.”

The last time the PCM ran candidates was in 1979 when it won 5.4 per cent of the vote and elected nine deputies to the National Congress, becoming the third-largest party in the country.

In 1981, party members voted to dissolve the PCM and form the United Socialist Party of Mexico (PSUM) with other left forces.

In 1987, the PSUM changed its name to the Mexican Socialist Party (PMS).

In 1988, the PMS dissolved and formed the Democratic Revolution Party (PRD) with dissident members from the PRI.

The PRD, which in the last election formed an alliance with the right-wing National Action Party, inherited the PCM’s electoral registration and property. Pavel and other former party members refounded the PCM in 1994.

The party is forming coalitions with unions and other popular organisations to press for political reform such as the one that led to the original PCM’s electoral registration in 1978 — back then the PRI government only asked that the party submit party publications for the last five years and a central committee membership list.

Obrador and Morena Senate President Marti Batres — a former Communist when he was young— have said they are open to discussing political reform, says Pavel.

“We think the working class should decide who it wants to elect, not the state.” 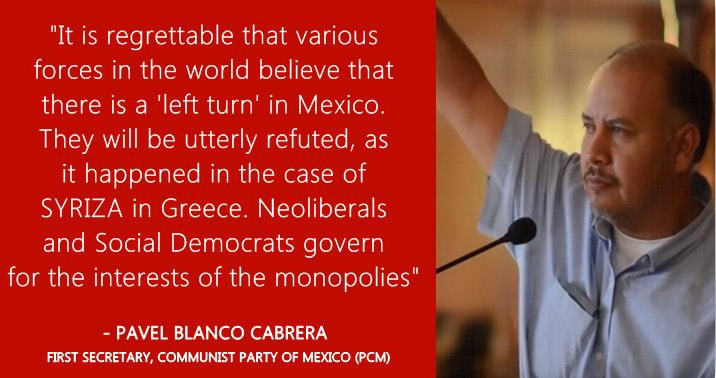 McDonnell visits Assange at Belmarsh ahead of US extradition hearing