Setting our sights on social justice in Scotland

This has caused often rancorous and unedifying divisions on the radical left.

The upward trajectory of the Scottish Socialist Party (SSP) from 1999 to 2004 marked a move by those supporting a socialist version of independence to reconfigure the debate away from the widespread notion that independence must be gained first and then social and economic questions could be settled later on.

The SSP insisted that only an independence based on social and economic justice in the first instance was capable of attracting mass working-class support.

Though the SSP still exists, its place as the leading left, pro-independence force was replaced by the Radical Independence Campaign.

Having made big strides forward during the referendum campaign, it failed to make a breakthrough in the 2016 Scottish Parliament elections in the form of Rise. Rise has now been wound up.

This double-sided debacle did not provide the so-called “unionist” radical left with much of fillip though.

Richard Leonard’s leadership of Scottish Labour was short-lived and Corbynism made relatively little impact on the fortunes of the Labour left in Scotland.

The fall of Corbynism closed off the chances of a radical restructuring of the constitutional and political settlement in Britain.

In mid-2022, the SNP’s position — in electoral terms at any rate — seems to still be pretty unassailable.

The SNP was not threatened by any left parties, with Scottish Greens more than doubling their number of councillors but only to 35 with 6 per cent of first preferences.

Led by Alex Salmond, Alba, which most of the left in the SNP defected to, stood 111 candidates but had none elected.

This included losing all its existing 13 councillors and gaining just 0.7 per cent of first preferences.

Widespread discontent with the SNP-led Scottish government over a legion of issues did not lead to any electoral backlash.

One could conclude then that the situation is pretty hopeless for the radical left then.

This is where the new publication from the radical left think tank, Jimmy Reid Foundation, comes in. 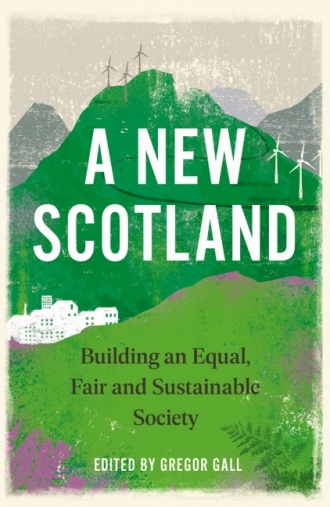 Called A New Scotland: Building an Equal, Fair and Sustainable Society, it sees over 50 leading left voices from the worlds of academia and activism come together to produce a book of 25 chapters on pretty much all the essential components of the past, present and future of society in Scotland.

The crucial contribution of A New Scotland: Building an Equal, Fair and Sustainable Society is to provide a radical left critique, proffering diagnosis and prognosis.

Critically, it provides the ideas about what kind of future society we need and what it would look like.

In other words, the crucial contribution of A New Scotland is about ideology.

Its importance is accentuated by the still low levels of collective class struggle at the moment.

While ideas and ideology can never substitute for working-class struggle, they can help sustain socialists through lean periods, sharpen their analysis and prepare them for the period when hay can be made.

So, while the contributors express their respective perspectives on independence and enhanced devolution, they do not let these get in the way of their diagnosis and prognosis of what can be done in the here and now, with existing powers to set society in Scotland on a new course for manifest social, economic, environmental and political justice.

And though the contributors do no lay out any detailed blueprints as such, they do, nonetheless, set out the principles and polices that are need to make society for the people in Scotland equal, fair and sustainable.

They ache for society in Scotland to be set on a new course, concluding that at present the mainstream political parties are capable of doing this.

They do so from the positions of hard evidence, reasoned argument, careful critique and enlightened ambition. In this sense, the book is a comprehensive and wide-ranging manifesto.

The Scottish government — as head of the Scottish state — is rightly the focus on most of their attentions, whether that be over health, housing, transport or education to name just a few areas.

But many of the chapters also look at what can be achieved in the realm of civil society like that of arts and culture and especially through community organisations, campaigns and unions.

Among the many contributors are academics who are also union activists and officers.

Not only is there something for everyone on the radical left or looking to the radical left in A New Scotland but together the chapters provide a comprehensive guide to the key questions of our age: what is wrong with society in Scotland and how can we put it right?

Edited by Gregor Gall, A New Scotland: Building an Equal, Fair and Sustainable Society is published in association with Pluto Press on May 20 2022, priced £14.99.

Professor Gregor Gall is director of the Jimmy Reid Foundation.

Injury-time leveller lifts Leeds out of the drop zone

10,000 march through London in solidarity with Palestine and for justice for Shireen Abu Akleh