HAVING triumphed at the May Day Festival of Solidarity in Barnsley and the BBC Highest Point festival in Lancaster, Manchester's The Moods rolled into London ushering in a thunderstorm on and off stage.

It was a stunning set from this collective of hedonistic and talented musicians out to give you a really good time, all the time, and their sense of togetherness on stage is one that the crowd can't resist.

Four lead vocalists/rappers, keyboards, drums, percussion, bass, trumpet and violin create a sound that cleverly mixes everything from techno to calypso beats into a melting pot they have made their own.

The show is like a non-stop DJ set that refuses to let anyone stop dancing and even shoe-gazers who've never heard them are soon won over. The set's mainly drawn from the brilliant Missing Peace album and the title track stands out, with Alice Needham's violin and Will Earl's's brass band-like trumpet soaring and John Horrocks's vocals aching with real passion.

Reggaeton rap never sounded as good as on Inception while Atmosphere could have started the storm thundering outside and there is indeed a static charges stalking the room when everyone sings: “Soaking up all the atmosphere, we're reaching to the stars, with the love from the pounding heart ... when nothing can stop us here, we’re moving through the music.”

Rapper Explicit is a human dynamo, a non-stop life force for fun, but this is not about one person. Each role is carefully crafted and the vocal interplay between Mark Cunningham, rapper Kolega, Explicit and Horrocks is exceptional. Beneath what at moments appears to be chaos, the timings are perfect — this talented band watch out for each other.

Profit over People (POP) is sublime, but listen out for new single Carnival, coming out on July 20. It could just be the sound of the summer.

The Moods are currently on tour. Click here for details. 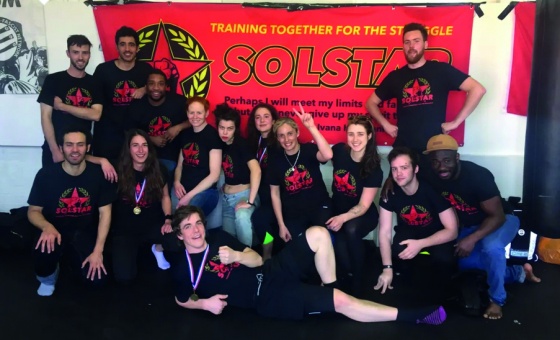