In part 2, STEWART McGILL reveals his personal experience of the St Pauli phenomenon

WE WENT to see St Pauli versus Duisberg in December 2017 (if you are thinking of visiting the club, go in the spring or late summer: Hamburg is colder than charity, I will never return in the winter.)

I didn’t want to buy any more gear in the sports shop so was hanging outside while my mate succumbed to the seductive merchandising of the world’s biggest left-wing club.

Despite the Baltic chill I had my jacket open to show off my T-shirt with the St Pauli skull and crossbones in Celtic colours, it’s a football fan thing.

The Celtic and St Pauli relationship goes back to 1991 when some St Pauli fans including Sven Brux, now head of security at St Pauli FC, did a tour of the various Football Fanzine editors across Europe and wrote of their experiences in the St Pauli Fanzine.

Brux said: “It started with a first visit in 1991 in Glasgow as part of our tour of going to different fanzine editors in Britain.

“We wrote an article about the trip and our experiences and after it was published more and more St Pauli fans got interested in Celtic FC and its supporters. Fan groups started going to the Scotland and vice versa to Germany and European matches.”

The relationship grew and blossomed when Celtic played SV Hamburg in the Europa League in 2009. SV have long had a relationship with the other club in Glasgow which has also had a strong catalytic impact on the Celtic and St Pauli romance.

A guy coming out of the shop noticed the shirt and came over for a chat. His name was Sonny Timm, a serious St Pauli Ultra and probably the most generous and welcoming ad hoc host I have ever encountered on my travels anywhere, and I’ve been very lucky with the people I’ve met.

Sonny had just been to Glasgow the week before to watch Celtic play Motherwell. He had been adopted by a friendly bunch of Celtic fans and didn’t pay for a drink all weekend.

Sonny was determined that we would enjoy the same hospitality and once my mate emerged considerably poorer from the St Pauli gift shop he took us to the Shebeen, formerly a hairdresser salon, now the second biggest St Pauli pub in the neighbourhood behind The Jolly Roger.

The Jolly Roger is great but a little touristy, the Shebeen is smaller and a tad more “ultra” but in a friendly way.

Booze is relatively cheap in Hamburg and you can still smoke inside some bars so I begun to feel a wave of ’70s nostalgia as we chatted with the regulars, pretty much all of whom spoke great English, even Hans, despite having visited Glasgow to see Celtic on 55 occasions over the last few years.

There was a definite Weegie influence on Hans’s accent and in his choice of robust language as he described the swift and summary justice meted out to anyone making sexist or racist comments in any St Pauli pubs and The Millernator.

We liked Hans, he was able to sell us the cheapest tickets at the St Pauli end, (just €10, the English Premier League is a total rip off) so we didn’t have to sit down in the posh €50 seats that were the only ones available online before we made the trip.

After several beers and mexicanas (Tequila and tomato juice hotly spices to take on the Baltic cold), Sonny took use into the stadium and gave us a wee tour before we took our place in the St Pauli standing end.

The craic was great, like British football in the ’70s but better: all the great feeling of being at one with a unified collective, expressed through the singing, the chanting, the synchronised jumping up and down with arms interlocked; all that without the underlying threat of violence, the racist garbage, the songs mocking fans from the North for being unemployed, the homophobia and all the other nonsense that keeps people away from mainstream British football.

If you’re a leftie football fan then St Pauli is nirvana, you can see the appeal and understand why tickets are so hard to get.

There is also a much greater mixing of the classes in the St Pauli end, British football ends still tend to be pretty much a working-class affair despite the ridiculous cost exploiting people’s loyalty to their teams.

St Pauli have a lot more middle-class people in the cheap stands, you’ll hear a good number of bourgeois English accents in there as well.

The game itself was a 2-2 draw, pretty dire stuff to be honest but St Pauli aren’t about the football, they’re all about the party, and the celebration of an inclusive anti-racist, anti-fascist and anti-authoritarian counter-culture.

Things were a little different for the derby game against SV just over a year later following the latter’s relegation to the second division.

SV have grown more right-wing over the years in dissonant harmony with St Pauli’s emergence as the top leftie club and have attracted greater support from the more militant fans of Glasgow’s second club.

That game was much less fun and more like a British game with a quasi-military operation from the police and a real atmosphere of menace.

The only good thing about it was the extraordinary turnout of international St Pauli fans, people were there from Glasgow, Belfast, Mexico, Madrid, Marseilles, Livorno, the Netherlands, the United States, Turkey etc etc. This is a real international phenomenon.

The success of clubs like St Pauli and the growth of the left-wing football phenomenon have some lessons for the left in general in my opinion:

The importance of establishing an emotional connection and the power of the feeling of belonging to a collective marked by a strong moral stance.

Supporting St Pauli is seen as being part of an ethos that is anti-fascist, anti-racist, anti-sexist is seen as “cool” and evokes a positive self-image. This may say nothing about the economic liberation of the working class but its power should not be underestimated; it still connects and is open for recruitment as capitalism’s problems intensify.

And the power of imagery and branding.

St Pauli’s skull and cross bones is fast becoming one of the most successful global brands and the variations therefrom on various items of merchandising are myriad. It’s all about finding an aesthetic that makes the emotional connection described above, something that evokes the feeling of belonging to a vibrant, collective morality and set of common values.

Plus the power of good slogans and internationalism.

Of all the photos I showed people of that trip to Hamburg, the one that resonated most strongly with people on social media was that of the “fuck your national identity” banner hanging from the house opposite the Shebeen.

There is an international ethic out there, there are people that don’t see foreigners and refugees as nothing but a threat, the left should never pander to narrow-minded nationalism and xenophobia in a vain search for dubious popularity. 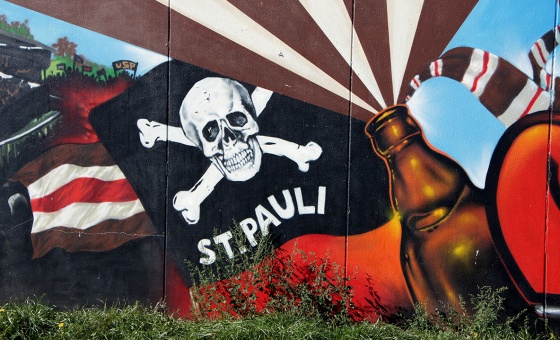